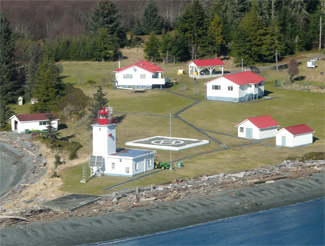 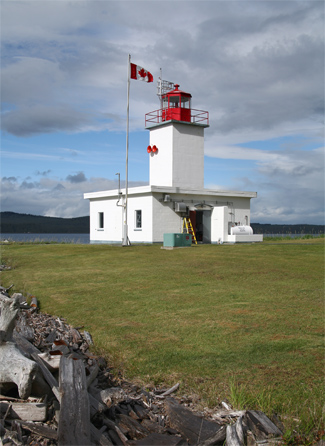 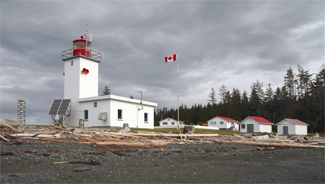 A barren sandspit that juts out from the southwest corner of heavily wooded Malcolm Island, Pulteney Point marks the separation of Broughton and Queen Charlotte Straits. The island and point were named in 1846 by Commander George T. Gorden of the HMS Comorant after Admiral Sir Pulteney Malcolm, a Scottish born British Naval Officer. Kwakiutl legend tells that their ancestors watched the island rise up out of the water and that someday it would return to its watery grave. For this reason, while the Kwakiutl used the cedar from the island for masks and totem poles, they never inhabited it.

The island was largely uninhabited in 1900, when Finnish immigrant coal miners in Nanaimo petitioned the Dominion of Canada for a piece of land to escape their miserable working conditions and start a Utopia where they could live in a community where everyone shared, participated, and was treated equally. The Finns were given Malcolm Island, and they called their community established there Kalevan Kansa. The name of islands main town, Sointula, is a Finnish word meaning a place of harmony. Concurrent with the arrival of the Finns, mariners petitioned for a light to be built at Pulteney Point to serve the growing shipping traffic.

Construction of Pulteney Point Lighthouse began as Kalevan Kansa was falling apart. After four years of hard economic times, rains, and a fire that killed some of their members, the community sold its assets and gave the land back to the government. A few of the Finns stayed in Sointula and took up commercial fishing. One of the communitys leaders, August Bernhard Makela, anglicized his name to Austin McKela, and became the first lightkeeper at Pulteney Point.

Pulteney Point Lighthouse, a square, wooden building with a square lantern rising from the center of its roof, exhibited a light at a height of thirty-eight feet above high water. The fixed white seventh-order dioptric light was lit for the first time on September 12, 1905. A hand foghorn, to be sounded during thick weather in response to the steamers fog whistles, was given to Keeper McKela in 1906.

McKela and his wife, Elli, kept the light until 1913, saving it from a wildfire in 1911 that consumed the boathouse. McKela left the light under the charge of Toivo Aro, a fellow Finnish settler, who was hired full-time in 1915  the same year a mechanical fog bell replaced the hand horn.

When Aros lighthouse bachelor pad received poor marks for tidiness by the inspector, he responded by writing, . . I honestly confess that I have been sometimes tired to keep allways very rigid order in the house. Aro knew the place needed a womans touch, but complained that there has been no women around here of proper age, and I have had no time to go seek further. . . Such women I like, for instance, the lady who was with you here, are not easily found.

The right lady, Kyllikki Jaakola, landed in Sointula in 1922 and they were married soon after. Their son, Vic, was born a year later. Vic recalled life growing up at the light, If I was alone and the weather was good, I would prowl the beaches and woods with my border collie who was my constant companion. It was probably there that I became interested in marine life, which ultimately led to me becoming a fisheries biologist.

Seventy years later, a girl, growing up at the light, would also go beachcombing amongst the driftwood on Pulteney Point. Lynae Ashe, at age eleven in an interview for a childrens magazine, spoke of building huts and rafts from driftwood and fishing from her raft for flounder and halibut.

And while the driftwood beaches havent changed much in over a half century, the lighthouse has.

In 1930, the Aro family left the station in the care of another Finn, Sula Wartie, to be closer to town for Vics education. Wartie served until June 1931, when Oliver Shorty Maisonville came on as the permanent keeper. Under Maisonvilles watch, a diesel air compressor operating a powerful diaphone horn was added in 1931, and around 1943, the original lighthouse was replaced by the current thirty-foot-tall square concrete tower that is attached to a corner of a one-story fog signal building.

Maisonville was also on hand when the Alaska Steamship Co.s Columbia ran aground at the point in 1942. After the shelling of Estevan Lighthouse in June of that year, the lights along the West Coast were ordered extinguished. With no light to guide her, the Columbia hit the spit in the dark, running a third of her length onto the point. There she stayed, right next to the lighthouse, for three weeks until tugs were able to pull her off during high tide.

Maisonville served until 1945, when he was replaced by Jonathan Fleming. Walter Tansky was keeper from 1963 - 1985.

Pulteney Point is a great family station. Only seven miles from town, lighthouse children attend elementary school in Sointula and ride the ferry to Port McNeil for middle and high school. Lightkeepers assigned to Pulteney tend to stay put for a long time.

Ted Ashe, Lynaes father, moved onto the lights in 1979, when the Ashes had two small children. An unassuming man, with a twinkle in his eye, he left the coast guard for the lights so that his family could work together and improve family ties. His wife, Karen, homeschooled the children through correspondence courses, while they were stationed at isolated locations like Langara and Pachena Point. They snagged the Pulteney lightkeeper position in 1985 and have been there ever since, raising five children on the light. In 2001, Ashe was awarded the Golden Jubilee Medal of Queen Elizabeth II for his lengthy service.

When the fog horn isnt blaring and boats arent cruising by, the sounds of lapping water and the wind through the cedar trees fill the air at Pulteney Point. Eagles dive for fish, and sometimes seals and orcas surface from the cold blue water. Visitors occasionally frequent the point and comb the beach for treasures amongst the driftwood just as many lighthouse children have done through the years.

For a larger map of Pulteney Point Lighthouse, click the lighthouse in the above map.

Take Highway 19 to Port McNeill from where a ferry provides access to Sointula on Malcolm Island. From the ferry landing on Malcolm Island, go left onto 1st Street, and after 2.8 km (1.8 miles) turn right onto Bere Road. After 0.7 km (0.4 miles) when Bere Road ends, turn left onto Pulteney Point Road and follow it for roughly 11 km (6.9 miles), just before the gate to the lighthouse property, where you will find a pullout for the lighthouse trail. From this point, it is a short walk to Pulteney Point Lighthouse.

You can also get this distant view of Pulteney Point from Vancouver Island by driving north of Port McNeil and turning right to reach Cluxewe Resort.