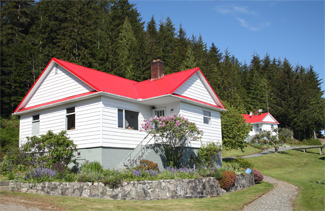 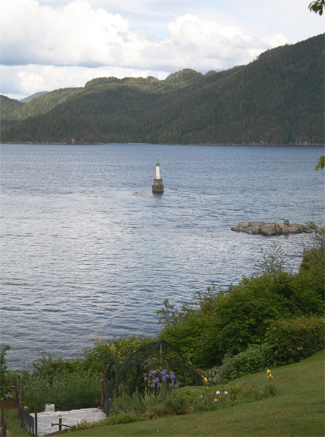 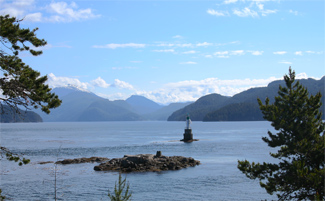 In July 1792, Captain George Vancouver wound his way northward through the Discovery Passage, where he made the following entry in his logbook on the 15th and 16th of that month.

Winds being too light and variable to command the ship against the influence of such rapid tides, we were under the necessity of waiting for the ebb in the afternoon of the following day, when with pleasant weather and a fresh breeze of NW, we weighed about three oclock turned through the narrows [Seymour Narrows] and having gained about 3 leagues by the time it was nearly dark, we anchored on the western shore in a small on a bottom of sand and mud in 30 fathoms of water to wait the favourable return of the tide. On July 16, 1792 with the assistance of a fresh SW wind and the stream of ebb, we shortly reached Johnstone Straits, passing a point which after our little consort [the HMS Chatham which accompanied the HMS Discovery on Vancouvers 1791-1795 expedition] I named Point Chatham, situated in Latitude 50° 19 1/2, Longitude 234° 45. This point is rendered conspicuous by the confluence of three channels, two of which take their respective direction to the westward and south-eastward towards the ocean, as also by a small bay on each side of it; by three rocky islets close to it; by three rocket islets close to the south of it and by some rocks, over which the sea breaks to the north of it.

And so was this stunning corner of the world described.

A light was first erected at Chatham Point in 1908, to mark the point where the Discovery Passage makes a sharp turn to meet the Johnstone Strait. It was a white steel cylindrical tank on a concrete base surmounted by a white steel pyramidal framework. Built offshore on a rock that stands about five feet above the water, the white flashing light was exhibited twenty-six feet above the sea. The current structure is marked with a green band across the top.

In 1957 a diaphone fog horn operated by air compressed by oil engines was placed on a bluff at the point. Along with the fog signal building, two one-story keepers dwellings, and a boathouse were built to complete the light station. Oscar Edwards, who had a long career in the BC light service, became the first keeper when he was transferred from Chrome Island Light Station on February 26, 1957.

The station is still staffed, and the keepers work, which includes maintaining the station and collecting marine and weather data is critical to local air and marine traffic.

We were saddened to hear of the passing of Steve Bergh in August 2010. His kindness and friendship will be missed, and we are grateful we had the chance to meet him and Alice Woods. After retiring from the lights, Alice Woods embarked on a fourteen-and-a-half-month sail around the world in 2012.

Lynn Hauer replaced Alice Woods as principal keeper at Chatham Point, and in November 2012, he sent the following account of a rescue carried out by him and his assistant to Senator Nancy Greene Raine, who was part of a committee that secured the continued staffing of Canadian lighthouses. The study released by the Senate committee was entitled "Seeing the Light."

We sleep with the radios always on, and 'with one ear open'. At 3AM on April 30, 2012 I was awakened by the unmistakable sound of a MayDay distress signal. Being able to copy both sides of the communication, I knew it was within our response area. I sprang out of bed. Comox Coast Guard Radio was responding to the call from a very concerned woman, "We don't have a lifeboat; we are putting our life jackets on now. We are bailing but it isn't helping!!"

I knew we could be there to help in 10 to 20 minutes; we were tasked by Rescue Coordination Center. Assistant lightkeeper Wolfgang Luebke and I responded in our 18 foot aluminum station boat. It was pitch black out, and raining. We made our way by compass bearing, across Johnstone Strait into Burgess Passage.

Arriving on scene, we found a man and woman frantically bailing water with ice cream pails! Their bilge pump was inoperative. Their efforts were futile. Their 'kicker' motor was under water, and the large outboard was next. Water was pouring in around the re-boarding gate and inches from flooding completely over the transom, which would have seen them go down in minutes. We began pumping the water out of their vessel, with the Honda pump that is always stored under the seat of our station boat. We were all very relieved to see the flood water level slowly subsiding.

The Cape Palmerston (CG SAR vessel) arrived on scene approximately 40 minutes after us. We saved an $80K boat from going to the bottom, and we surely saved a man and his wife from drowning; they would have been in that frigid water with only PFDs, for more than a half hour, had two keepers from Chatham Point Light not been therewe wouldn't have been there if not for your SEEING THE LIGHT!

The rescue account was timely evidence of the value of having staffed lighthouses along the remote Canadian shores.

You can check out the current weather conditions at Chatham Point by clicking here.

Located at Chatham Point, at the confluence of Discovery Passage and Johnstone Strait.
Latitude: 50.3334, Longitude: -125.4405

For a larger map of Chatham Point Lighthouse, click the lighthouse in the above map.

As access to Chatham Point Lighthouse by land is over a private logging road, the station is best seen from the water.

You can check out the current weather conditions at Chatham Point by clicking here.