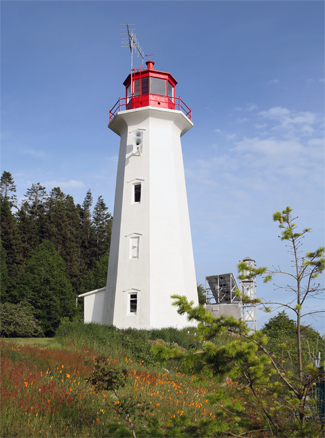 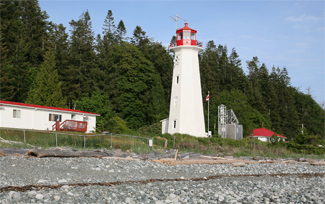 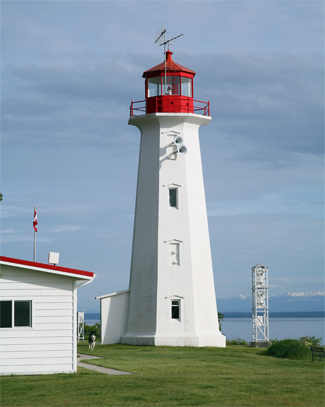 Though a seemingly tranquil spot passed by ferries and cruise ships headed for Alaska, just a few miles north lie the dreaded Seymour Narrows, which George Vancouver described as one of the vilest stretches of water in the world.

Charles Sadilek, whose journals are housed at the Museum of Campbell River, experienced just how wicked the whirlpools of Seymour Narrows could be on June 18, 1875 while aboard the USS Saranac, a three-masted gunboat used as a floating laboratory for the Smithsonian Institute.

Sadilek wrote, I have never seen an inland body of water more threatening than Seymour Narrows. Even the ocean in a temper has no such ravening aspect.

When the USS Saranac entered Seymour Narrows at low tide, the pilot, Captain William George, advised Captain Walter W. Queen to wait until flood tide to press forward as Ripple Rock, with its protruding twin teeth, lay just nine feet below the surface at low tide and was known to bite into passing ships. The captain, however, decided to risk it. Sadilek recounts, when in a midst of a whirlpool, the ship refused to answer her helm and was for a moment beaten about by the angry water, when all of the sudden there came a crash that shook the ship as if it had been fired by a battery of guns. . . .The fearful rush of water as it closed over her was so powerful that it would have killed any living being who might have been aboard.

The Saranacs engines were able to drive the sinking vessel to the Vancouver Island side of the narrows, and there anchored, the crew either leapt to shore or used the lifeboats to escape. All had barely reached safety when the ship sank, stern first, in 300 feet of water.

Ripple Rock would claim another 119 vessels and take 114 lives before meeting its match in 1958. In a procedure similar to a root canal, a crew of seventy-five men spent twenty-seven months digging a tunnel beneath the Narrows and up into the two peaks of Ripple Rock. 1,247 tons of explosives were packed into the peaks and then, on April 5, 1958, blasted away in the worlds largest non-nuclear explosion. The detonation obliterated 336,000 tons of rock, displaced 290,000 tons of water, and reduced the height of Ripple Rock by thirty-eight feet.

Cape Mudge has also seen its share of shipwrecks, including the Cottage City which went down, on January 26, 1911, thirteen years after the light station was established. Lightkeeper John Davidson, a fiercely independent Scotsman, was pumping his hand fog horn in blinding snow and heavy fog, when the Cottage City, unable to get a bearing on Cape Mudge crashed onto a rocky reef two miles south of the light.

Davidson guided the lifeboats to safety by waving a white flag on the beach. The snow was so deep the passengers, including the fourteen women and a four-year-old child on the first lifeboat, had to hike along the beach, after landing in a sheltered cove, to reach the warmth of the lighthouse. Davidson and his wife gave the passengers hot food and put them up for the night, with some housed in the lantern room, until a steamer picked them up the next day.

For their efforts, the Davidsons received fifty dollars from the commander of the Marine Service and many letters of gratitude from the Cottage City passengers and crew.

Davidson responded, I only did my Duty but I dont want know more wreck while I am hear.

The southern tip of Quadra Island was named Punta de Magallanes by Captain Dionisio Galiano just days before George Vancouver rechristened it Cape Mudge in honor of his first lieutenant Zachary Mudge. When Vancouver landed nearby in July 1792, he found a large village of First Nation people (the Coast Salish) who uniformly conducted themselves with the greatest civility and respect.

Responding to the increased marine traffic caused by the Klondike gold rush, a lighthouse was built on the point in 1898. Constructed by G.H. Frost of Nanaimo for a contract price of $1,225, it was a square wooden dwelling painted white with a square wooden lantern centered atop its red, hipped roof. The lighthouses fixed white light, exhibited thirty-two feet above high water, could be seen for ten miles.

John W. Davidson lit the lamp inside the seventh-order dioptric lens for the first time on September 16, 1898. A fifth-order Fresnel lens replaced the original lighting apparatus in 1908.

After the wreck of the Cottage City and the not so gentle prodding of the Canadian Pacific Railway Coast Service, a fog signal building, equipped with a diaphone fog horn, was added in 1913. Much to the chagrin of Davidson, his workload quadrupled, while his pay remained the same. A new dwelling and oil shed were also added to the station at the same time as the fog alarm building.

The wooden lighthouse was replaced with the current tower, a forty-two-foot white octagonal reinforced concrete tower with a red lantern on top, in 1916. The original lighthouse was retained as a dwelling after completion of the new tower.

The Davidsons retired in 1918, when Herbert W. Smith was transferred to Cape Mudge from the Nootka station. Smiths wife died in the 1919 flu epidemic, and shortly after he wrote Colonel Wilby, the Marine Agent, requesting time off to meet a female friend coming from England as Smith had promised to meet her on arrival as the object of this visit is matrimony. Keeper Smith and his son had been living alone at the station since his wifes death, so he hoped Wilby would understand how a housekeeper and the refreshing influence of a Woman would be appreciated.

Smith remained at Cape Mudge until 1927, when due to failing health, likely brought on by mercury poisoning, he resigned. His successor was Joe Pettingell, who transferred with his family from Sisters Rock. The Pettingells had a difficult time transitioning from the isolation of Sisters Rock, and in 1931, Keeper Pettingell wrote the Marine Agent, We appreciate being alone more than we do by being in a community where temptation has caused us much unpleasantness & and is certainly doing my family much harm. Somehow, they made it through the transition and stayed at the station until 1943. A new dwelling for the assistant keeper was built in 1949.

Given its close proximity to civilization, Cape Mudge has been a desirable station and so naturally experienced a low turnover of keepers. Jim Abram served nearly twenty years at Cape Mudge before retiring in 2004. Though no longer an active keeper, he continued to be a strong advocate for keeping British Columbia light stations staffed.

Cape Mudge is now high-tech with an automated weather-observing system and a solar-powered light, horn and videograph fog sensor. With all that equipment, the Canadian Coast Guard felt there was no need for human presence at Cape Mudge, and in September 2009, the station was slated to be de-staffed. After protests from keepers and the public, who noted that an automatic sensor can never fully replace a pair of alert eyes on the water provided by a lightkeeper, the de-staffing plans were put off pending further review.

For a larger map of Cape Mudge (Quadra Island) Lighthouse, click the lighthouse in the above map.

The lens from Cape Mudge Lighthouse is on display at Vancouver Maritime Museum.

The lighthouse is owned by the Canadian Coast Guard. Grounds open, tower open during Spring and Summer in good weather.