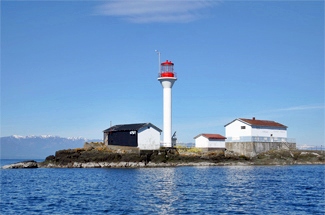 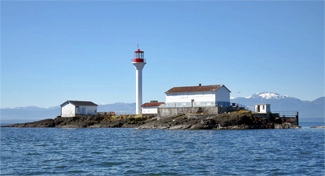 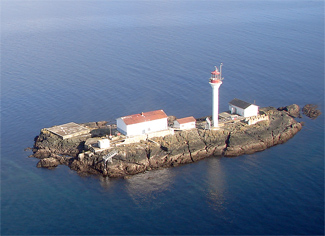 Sisters Islets are a close grouping of rocks located in the Strait of Georgia off the northwest end of Lasqueti Island. In 1897, James Gaudin, Marine Agent in Victoria, notified William P. Anderson, Chief Engineer of the Department of Marine, that more lights were needed to assist the increase in traffic headed north to the Alaskan gold fields and that Sisters Islets was the first place that should be lit.

The most easterly and largest of the three primary rocks was selected as the site for a lighthouse to replace a day beacon that had formerly marked the hazard. Built during 1898 and placed in commission that December, Sisters Islets Lighthouse consisted of a rectangular, wooden dwelling with a square tower rising above the northwest corner of its roof. The tower measured thirty-six feet tall from its masonry foundation to the ventilator ball on is octagonal, wooden lantern. The masonry foundation provided a good cellar for the keeper and a level surface for working around the lighthouse.

A seventh-order lens shone a fixed white light at a focal plane of forty-six feet, and a bell, hung in the dwellings northeast gable, was struck once every thirty seconds during periods of low visibility. George H. Frost, the lowest bidder, constructed the lighthouse for $3,257.

Ronald McNeill was appointed the first keeper of the isolated lighthouse, but after spending just one long and tedious winter at the station, during which he didnt speak with a single person, he resigned the following summer. Harry Higgins brought his Indian wife to the lighthouse to keep him company when he replaced McNeill, but after just a few months at the lighthouse, Higgins wife left, unable to tolerate the fog bell whose tolling cracked the plaster in the dwelling. Higgins lasted another year at the station by himself before turning control over to Alfred Jeffries, who left less than two years later due to his wifes illness.

Agent Gaudin had high hopes that Benjamin Blanchard might be able to outlast his predecessors, but he too failed to reach the two-year mark, resigning due to the poor pay. W.C. Farnehough, the next keeper, left after six months because of the miserable living conditions at the lighthouse. Sisters Islets had seen five keepers in its first six years of operation.

Benjamin Blanchard decided to return to the rocks after learning that the keepers salary was going to be raised significantly. Though the salary was eventually increased, so was the workload, as work on a one-and-a-half-inch diaphone fog signal began in 1907. George H. Frost returned to oversee the erection of the fog signal building and the installation of the diaphone plant and machinery, supplied by the Canadian Fog Signal Company of Toronto for $1,900. Frost completed the work in 1908 at a cost of $2,664.94, and the new fog alarm gave two, three-second blasts every ninety seconds when needed.

Blanchards annual salary rose from $500 to $800 when the fog signal commenced operation, but he was also required to pay for an assistant. Fortunately, Mrs. Blanchard was up to the task, and the family could retain the extra money. Keeper Blanchards second stint at the lighthouse exceeded five years but ended in 1910, when he resigned to obtain educational advantages for his young family.

As Sisters Islets was not an ideal location for raising a family, the Marine Department often employed bachelors on the rocks, but the isolation often made them despondent, and they proved to be poor housekeepers. When Gordon Halkett visited the lighthouse in March 1915, he reported that it was kept in a disgraceful condition. Marine Agent George Robertson warned Keeper Thomas Hayllar that he better give his pig stya thorough cleaning, as he planned to be in the vicinity shortly.

In 1914, a fourth-order Fresnel Lens was installed at Sisters Rocks, changing the lights characteristic to a group of two flashes every ten seconds.

During the short tenure of Charles Clark in 1924, earwigs overran the lighthouse. Towards evening they come out and spread all over, Keeper Clark reported. My wifes nerves are in such a shape I am afraid I shall have to send her away from the station. The Marine Department sent out a mixture of flour and plaster of Paris, which had proved effective for pests of this kind at other stations, to combat the infestation. Order was soon restored to the lighthouse, but not before Clark had sent his wife and two-year-old son ashore, and he soon joined them.

Perched just a few feet above the Strait of Georgia, Sisters Islets Lighthouse was vulnerable to storm surge. Keeper Jonathon Flemings Christmas festivities were interrupted in 1932 by a terrific southeast gale that threatened to tear the station from the rock. Flemming reported the follow list of damages to authorities:

Boathouse wrecked and most of it washed away with equipment and personal effects. Boatways washed away and boat damaged. Owing to the weight of oil drums the oil hose was saved but was shifted on the foundation and sides and floor damaged. Outside walk of engine house badly damaged, and drain pipes leading to water supply tanks broken and washed away. Toilet, sidewalks and platforms all wrecked and washed away. Pipe guard rail round dwelling twisted out of shape and broken. During the storm I could not get away from the dwelling as heavy seas were breaking over platforms.

Charles Lundgren served as keeper from 1944 to 1945, accompanied by an assistant and fifteen dogs! When he left, the station was a reeking kennel. Keeper Tolpitt and his wife Elsie, the next residents of the lighthouse, had the added task of making the place livable. Elsie was cut out for task as evidenced by her letter to Marine Agent Stamford:

Oh Boy! What fun were having along with the dirt, fleas & old relics of furniture. The smell is vanishing by degrees, thanks to the simple things in life such as soap, fresh air & darned good elbow grease. While at Cape Beale & Cape Mudge I developed a spare tire around the middle, but Ive lost it already with perpetual motion ten hrs. a day, but now I see my knees are like sand paper, but so along as we get this place sweet and clean I dont mind. We cant even handle a thing but what our hands are covered in filth & grim; Never in my life have I seen such a contaminated mess that those two partners made this place. Id like to string them up especially the dog owner; Every Floor was stained from his dogs.

Despite having to deal with someone elses mess, Elsie remained upbeat. I must admit Im very happy & contented & really like the life of a light keepers wife.

Keeper Tolpitt resigned in 1947, when Elsie became seriously ill, and incredibly, Charles Lundgren was reassigned to the lighthouse. In no time, the deep cleaning Elsie Tolpitt had given the place was likely spoiled.

After decades of abuse by waves and careless keepers, Sisters Islet Lighthouse was replaced in 1967 by a slender, cylindrical, concrete tower that flares out at its top to support a lantern room and gallery. Joining the tower on the rock were a four-bedroom dwelling, a fog signal building, and a helicopter-landing pad, used to shuttle keepers to and from the mainland. The station was de-staffed in June 1996, and today the surviving weathered structures are all boarded up.

For a larger map of Sisters Islets Lighthouse, click the lighthouse in the above map.

Sisters Islets Lighthouse is best seen from the water.