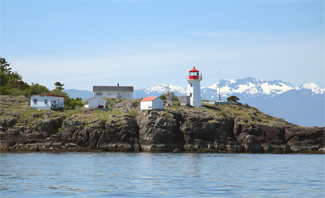 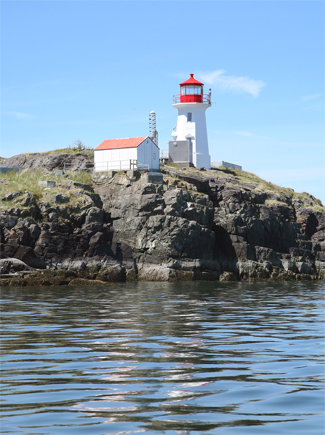 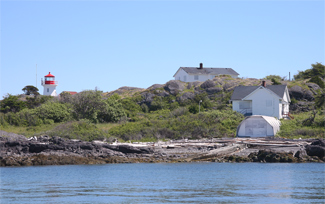 During July of 1791, Spanish explorer José María Narváez, at the age of just twenty-three, led the first European exploration of the Strait of Georgia as commander of the schooner Santa Saturnina. While offshore from present-day Parksville, Narváez encountered a pod of whales near a pair of islands, which he immediately named Islas de las Ballenas (Whale Islands). The sighting of the whales convinced Narváez that the Strait of Georgia must have a second connection to the ocean besides the Strait of San Juan de Fuca. Ballenas Islands were mistakenly labeled Ballinac on the charts of the British Admiralty, and use of this name was common until it was corrected by the Geographic Board of Canada in 1905. For example, an 1864 edition of The Vancouver Island Pilot notes: Ballinac Islands, two in number,are about 250 feet high; the northernmost one has but two or three trees, and its summit terminates in a sharp, bare nipple; the southernmost is wooded. They have the appearance of one island seen from all points; indeed, are only separated by a narrow passage of less than a cable on the eastern side, which opens out within, and forms a sheltered cove with anchorage for small vessels.

In 1898, Captain Smythe of the Royal Navy survey ship Egeria recommended that a light and fog alarm be established on Ballenas Islands to serve the growing number of vessels using the Inside Passage. James Gaudin, the marine agent in Victoria, endorsed the proposal and, after securing approval from Ottawa, dispatched a crew in May of 1900 to select a suitable site.

A knoll on the southeasterly part of South Ballenas Island was chosen as the location for a square, pyramidal, tower, built of wood and topped by a square, wooden lantern. The tower measured thirty-three feet from its base to the vane on its lantern and exhibited its light at a height of 100 feet above high water. The light had a repeating pattern of fixed white for twenty seconds followed by an eclipse for ten seconds.

Ballenas Islands had belonged to Charles Drummond, but after he drowned while rowing home from Nanaimo one evening, his will dictated that the islands be given to Maggie, his Indian wife. Maggie later married Wilhelm Betait, a German immigrant who anglicized his name to William Brown.

When Ballenas Lighthouse was completed in 1900, William Brown was appointed its first keeper. The following year, Brown was given a hand foghorn along with a charge to use it in response to the signals of vessels near the islands. In 1905, Gaudin learned from police at Nanaimo that Keeper Brown, described as insane and irresponsible, was being held in the city jail. Shortly thereafter, Maggie had to have her husband committed to the lunatic asylum in New Westminster as he was hopelessly insane and violent. Miraculously, Brown returned to the station a month later, but his recuperation proved temporary, as he was recommitted the following year, never to be released again.

Maggie cared for the light as needed until Browns nephew, Wilhelm Betait, arrived from Germany and was put in charge of the light.

In 1907, the local Member of Parliament, joined by various shipping interests, petitioned for an improved light and fog signal on Ballenas Islands. Work on the fog alarm commenced that year on the northern tip of North Ballenas, and by the end of the following year, a wood-frame dwelling along with a rectangular wooden structure housing a diaphone plant supplied by the Canadian Fog Signal Company of Toronto had been completed.

For some reason, the lighthouse remained on the southern island until 1912, when it was taken down, moved to a site near the fog alarm, and reassembled. That same year a boathouse, slip, and windlass were provided, and the following year, a new dwelling was completed along with the installation of a duplicate fog alarm.

After incessantly pestering the marine agent for a transfer to a less-remote station, Arthur Gurney and his wife and three children left Pine Island in the fall of 1912 for Ballenas Islands. Gurneys pleas for a pay raise, however, were not fulfilled, so he proposed that the requirement of a male assistant be waived, allowing him to keep more money for himself. An annoyed agent at Victoria reminded Gurney that every station with a fog alarm had an assistant paid by the keeper, as one man was not capable of running a horn for stretches of up to a week while maintaining a light.

The outbreak of World War I finally afforded Gurney a way to augment his salary. An order-in-council allowed government employees to enlist and continue to receive their former full salary during their military service. Thirty-nine-year-old Gurney, a veteran of the Boer War, signed up and turned responsibility of the station over to his wife Anna. Mrs. A. B. Gureny was listed as keeper on the Department of Marines payrolls from 1917 to 1919, and then her husband was again listed from 1920 to 1921, when the Gurneys were transferred to Active Pass.

The relocated lighthouse wasnt in use for too many years on the northern island, as in 1917 an octagonal tower built of reinforced concrete was completed roughly 400 yards north of its wooden predecessor. The thirty-five-foot-tall tower was painted white and capped by a red, octagonal lantern, which housed a triple-flash, long-focus reflector.

While the isolation of Ballenas Island drove its first keeper insane, it was a perfect match for its final keeper, Richard Wood, and his wife Rita. First thing everyone asks us, Richard says, is: How can you live all alone out here. Who do you talk to? With a chuckle, he answers, We talk to each other.

Rita and I, were a couple of reclusives and hedonists out here. So this is exactly our lifestyle. And if we want to get a little bit crazy, theres no one to wag their fingers at us.

Ballenas Islands Lighthouse was de-staffed on September 1, 1996, and Richard and Rita were transferred to Cape Scott.

For a larger map of Ballenas Islands Lighthouse, click the lighthouse in the above map.

Ballenas Islands lighthouse is best seen from the water, but a distant view if possible from the shore at Parksville.