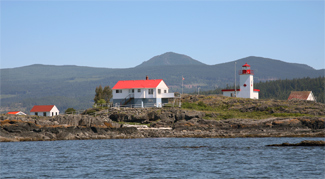 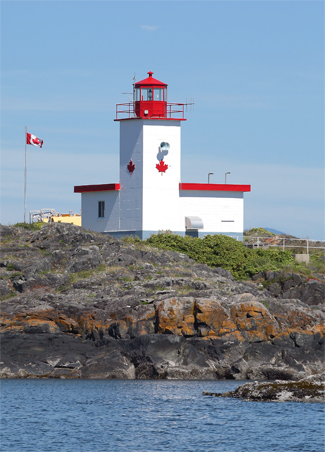 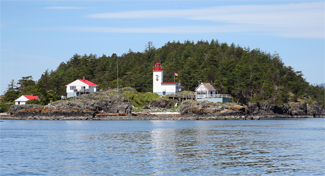 It seems a sure bet that Captain George Richards, who surveyed the British Columbia coast in 1860 aboard the HMS Plumper, was a horse racing fan. Earlier that year, Thormanby, a three-year-old racehorse owned by James Merry, won the Epsom Derby in England, and Captain Richards used this information when he christened features along the Sechelt Peninsula: Thormanby Island, Merry Island, Epsom Point, and Derby Point.

As vessels traveled between Vancouver and points northward, they would often pass through Welcome Pass, which is bounded by Thormanby Island and the mainland and has Merry Island situated at its southern entrance. In 1901, the Vancouver Ship Masters Association sent a petition to Ottawa with their Member of Parliament praying for the establishment of a lighthouse and fog alarm on Merry Island as they would surely be an invaluable boon in dark and nights and foggy weather.

Money for the project was soon allocated, and work on the site commenced in May of 1903. The Annual Report of the Department of Marine for that year carried the following information on the newly established light:

A lighthouse has been erected on the summit of the low point forming the southeast extremity of Merry island, at the southeast entrance to Welcome pass, which separates Thormanby Island from Sechelt peninsula off the southwest coast of the mainland.

The light is shown from an octagonal wooden lantern, standing on the roof of the Lightkeepers dwelling, which is a rectangular wooden building with a mansard roof. The lantern and building are painted white throughout. The height of the lighthouse from the base to the ventilator on the lantern is 35 feet.

From November 6, 1903, until the permanent illuminating apparatus is ready for installation, a temporary fixed white light will be shown from this station. It is elevated 57 feet above high water mark, and should be visible 6 miles from all points of approach by water.

The lighthouse was erected by day labour, under the superintendence of Mr. P. G. Fenton, of Vancouver.

Will Franklin was appointed first keeper of Merry Island Lighthouse, and he and his wife Mary Ann became quite self-sufficient by claiming the rest of the island under the Homestead Act and raising thereon sheep, turkeys, chickens, and ducks. This move was partly prompted by Franklins meager annual salary of just $360  less than a dollar a day.

Keeper Franklin was provided a hand foghorn in 1903 that he was required to sound in response to a vessels signal, but in 1922 the secretary of the Pacific Division of the Canadian Navigators Federation complained to the marine agent in Victoria that the fog horn which is worked by hand is inadequate and should be replaced by a more powerful horn operated by mechanical power. Franklin was asked to keep track of the number of ships passing the station to ascertain if a formal fog signal was justified. In just one month, 220 vessels passed Merry Island during daylight hours, and the desired mechanical fog signal commenced operation in April of 1924.

A radio station was established on Merry Island at the same time the fog signal was constructed. Gerald Pike served as radio operator on the island and would send regular weather reports along with information on passing ships. On March 22, 1927, Pike was carrying a can of gasoline to refuel an engine so he could charge the radios batteries, when he heard a call come in. He rushed into the radio room, can in hand, and as he went to set it down, a spark from the pipe he was smoking fell into the fuel producing an eruption of flames.

In an attempt to save the radio equipment, Pike grabbed the can and raced outside, setting himself ablaze in the process. He instinctively rushed to the keepers house for help. In a report on the incident, James Cunningham of the B.C. Police noted that Pikes trail could be followed across the engine room floor to the outer doors, and up the walk to Mr. Franklins residence by burned bits of clothing and blood. Keeper Franklin was not at home, but his mother-in-law doused Pike with a pail of water, and then, using the hand horn, summoned Franklin, who returned in time to save the stations buildings from burning to the ground. Pike passed away at a hospital in Vancouver shortly after arriving there aboard the tug Leroy, which responded to an SOS put out by Franklin.

Keeper Franklin retired in 1932, after thirty years at the lighthouse, but remained on the island for several years to care for his small farm. A subsequent keeper, E.J. LeClerc, wrote to the marine agent as he lay dying in a hospital. This may be the last letter you will get from me, and if there is anything you can do to help my little family after I have gone from here, I will greatly appreciate it, and God knows they will need help for a while. The agent honored the keepers request by appointing his wife, Helen LeClerc, keeper of Merry Island in 1939.

Helen was born in British Columbia to German parents, and when World War II broke out, even her husbands service in the earlier war couldnt save her from close scrutiny by the small islands few residents. The keeper was charged of being a German Nazi and entertaining all kinds of German friends. After enduring her neighbors paranoia during the conflict, Helen retired in 1945 due to ill health.

George Potts served for fifteen years at Merry Island starting in 1951. Keeper Potts daughter Joanna was two when she arrived on the island and ended up spending most of her childhood there, as her father was keeper until 1966. Commercial electricity hadnt reached the island by the time the Potts family arrived, so they used a small Onan generator to power a television and kerosene to run their refrigerator. Keeper Potts had no assistant at first, a condition that would result in his being treated in 1958 for total exhaustion. He provided the following account of his responsibilities that included operating the light and fog alarm and filing weather reports at 8 a.m., 10:30 a.m., 1 p.m., 4 p.m., 8 p.m., and 10:30 p.m.

I am on the go from daylight to 9 PM every day without a single break. I had one period this winter where I went 14 days without my clothes off and got only 10 hours sleep in that time. At the end of the period I used to sit outside in a chair to keep myself from falling to sleep. My wife gives me a hand as much as she can, but whereas with the other stations the wives can give the weather at 8 AM and allow the keeper to sleep in. Here that is not possible as Aviation weather entails a lot of detail and knowledge of sky conditions.

Joanna received her early education through correspondence courses supplied by the Department of Education. By the time she was ten, Joanna was fully capable of taking her fathers ten-foot runabout across the channel to the store during the summer when conditions were calm. Keeper Potts purchased a car that he stored at the B & J store in Halfmoon Bay, and the family would occasionally use it to make a quick run to Sechelt between weather reports.

A dwelling was finally built for an assistant keeper in 1958, and Fred Julian was hired as the first permanent assistant to help Keeper Potts with his workload.

Additional modern conveniences came to Merry Island in 1966, when the current lighthouse, a square, one-story building with a forty-foot tower rising from one corner, was built and electrical and telephone cables were laid across Welcome Pass. In 2001, the portion of the island owned by Keeper Franklin, which still has two structures built by him, was put on the market for $1.5 million. Roughly half of the lighthouses in British Columbia remain staffed, and Merry Islands brightly painted lighthouse and two nearby dwellings clearly identify it as one of the lucky ones.

For a larger map of Merry Island Lighthouse, click the lighthouse in the above map.

Merry Island Lighthouse is best seen from the water, but a distant view is possible from Redrooffs Road, which is a loop off of Highway 101 just south of Halfmoon Bay.