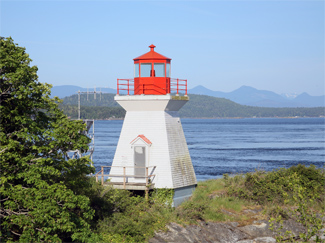 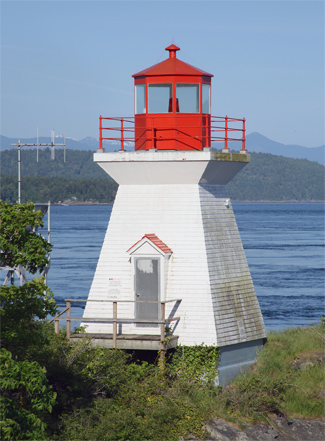 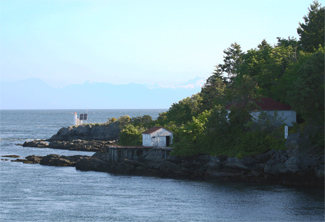 Porlier pass, between Galiano and Vales islands, is the first outlet into the strait of Georgia northward of Active pass; the pass, though short (not exceeding 1 mile from its southern entrance until fairly in the strait), is narrow, and is rendered still more so by sunken rocks; the tides are very strong, running from 4 to 9 knots, and overfalls and whirling eddies are always to be met in the northern entrance.

Caution.  In consequence of the numerous dangers existing in Porlier pass, mariners are advised to avoid that passage.

Despite the above warning, carried in the B.C. Coast Pilot, mariners often braved Porlier Pass to shave precious minutes off their runs, and the shift from sailing ships to steamships helped further embolden captains. In 1898, James Dunsmuir, owner of Wellington Colliery Company, founded Ladysmith on the eastern shore of Vancouver Island, in-line with Porlier Pass. Steamers were soon carrying coal from Ladysmith through Porlier Pass, and in 1901 barge ferries, loaded with railcars, started regular trips between Vancouver and Ladysmith. Once on Vancouver Island, the cars were placed on the Esquimalt and Nanaimo Railway line, and in this manner, cargo could be carried between Victoria and Vancouver in just one day.

Late in 1901, the superintendent of the Esquimalt and Nanaimo Railway joined the captain of the Ladysmith-Vancouver barge ferry and several pilots and masters of steamships in petitioning the Department of Marine for range lights on the northern end of Galiano Island to guide vessels through Porlier Pass.

Day labourers, under the supervision of Thomas Tubman, began work on the Porlier Pass Range Lights the following year, and the beacons were put in operation on November 15, 1902. The front light, exhibited from a square, wooden tower surmounted by an octagonal wooden lantern, was placed on bare rock on Race Point, fifty feet from the waters edge and six feet above high water mark. The height of the tower, as measured from its base to the top of the ventilator on its lantern, was twenty-four feet.

The rear range light was situated on Virago Point, the first point southwest of Race Point. This tower was also square in plan but had sloping sides and was surmounted by a square, wooden lantern. The height of the rear tower was thirty-one feet, and it stood on bare rock, 125 feet from the waters edge and twelve feet above high water mark. Both towers exhibited fixed, white lights, with the front light being catoptric and the rear dioptric.

The northern end of Galiano Island has long belonged to the Penelakut First Nation, and James Gaudin, the marine agent at Victoria, planned to hire Peter Sit-who-latza, a local Indian, to care for the lights at a monthly salary of $25. As Peter had a residence nearby, a dwelling would not have been necessary, but it was the prerogative of the local Member of Parliament to nominate keepers, and Ralph Smith insisted that Sticks Allison be given the job.

Sticks real name was Francis. He ran away from his home in Scotland at the age of nine, and after working in a coal mine for a few years in Nova Scotia, he made his way to British Columbia, where he worked as a farm labourer before going underground again after coal. In 1901, he was injured in a mine explosion, and while recuperating in a hospital, he befriended a little Italian boy. When the boys parents inquired where he obtained the fruit and candy he was enjoying, he pointed at Allison on his crutches and said, The man with the sticks gave it to me. And the nickname Sticks stuck.

Allison was still using sticks when he took control of the Porlier Pass Range Lights and would have a limp for the rest of his life. As no dwelling was supplied, Sticks was forced to live in a twelve-by-sixteen-foot shack left behind by the carpenters who built the towers. Gaudin visited the station in April of 1903 and noted, [As is] customary with our experience of the absence of a woman at a station [it] is not as tidy as could be desired, but on the whole I consider Allison makes a very good lightkeeper. In 1907, a four-room cottage equipped with a water cistern was built just in time for Sticks to bring home his new bride, Mathilda Georgeson, granddaughter of Keeper Scotty Georgeson at Active Pass.

Allison soon earned a reputation among mariners for not only keeping a dependable light but for also going out of his way to ensure the safety of those vessels plying Porlier Pass. Before he was provided a hand fog signal and given a charge to sound it in response to a vessels signal, Allison would hobble down to the shore and beat a five-gallon oil can with a stick when he heard the whistle of a steamship in the pass. For his service, Canadian Pacfic Railway, which acquired Esquimalt and Nanaimo Railway in 1912, awarded Allison a lifetime travel pass aboard its fleet, but the keeper had precious little free time for travel.

Keeper Allison was also generous to the Indians living near him. Each Christmas Eve, he and his family would prepare two large Christmas puddings, and then after the lights were lit, they would set off for the reserve in their rowboat with two steaming jugs of brown-sugar sauce. His two daughters, Devina and Frances, would run up to the residences and summon the Indians. They would bring their utensils down, Frances remembers, and Daddy would have his knife and he would carve off a slice of pudding for each one in the family, and pour some sauce in their container. Next, they would row to the Japanese fishing boats anchored nearby and divvy out more of the Christmas pudding. Now no work, no fish Christmas Day, Allison would exhort the perplexed fishermen. Thats Jesus day. Everybody rest. Suppose you dont rest; then Jesus bring no more fish. You go out catch fish after Christmas-time  no fish!

The familys Christmas season was not so merry in 1915, as Allison lost his Mathilda just before the holiday. Allison married Elizabeth Gear, a war widow with a fifteen-year-old son, in 1922, but the loss of his first wife and the never-ending work at Porlier Pass started to affect him.

On the night of December 22, 1929, Sticks, fueled by a bottle of rum, took a swing at Elizabeths head with the but end of his shotgun. Thanks to Elizabeths maneuverability and Sticks poor aim, the only thing injured was the walnut stock of the gun, which shattered as it hit the floor. The following day, Elizabeth retreated to Ladysmith where she filed a complaint against her husband. The couple soon separated, and Elizabeth and her son took up residence on a fuel barge near Porlier Pass, where she worked pumping gas.

Convinced his former wife was consorting with other men, a drunk and jealous Allison would yell his accusations to passing boats. One man from Chemainus, who visited the barge for fuel, reported that Keeper Allison, set atop a high bluff, shouted for the full benefit of all in the settlement  accusing him of immorality with Mrs. Allison.

Allison was becoming a public-nuisance, and on more than one occasion the marine agent nearly fired him. Despite his personal issues, Allison still managed to care for the lights and rescue people endangered in the pass. Sticks had made many friends in the maritime community who reciprocated his kindness by writing letters of support for the embattled keeper. Allison served until he turned seventy-six in 1942, convinced that the department would soon award him the Imperial Service Medal for his forty years of devotion to those transiting Porlier Pass.

Allison never did receive his medal, but his legacy at the station lived on as both of his daughters (Devina Baines and Frances Brown) married keepers who subsequently served at Porlier Pass.

The front light tower on Race Point was removed in February of 1996 and replaced by a cylindrical fiberglass tower. The station was de-staffed two months later. Pieces of the original front range tower were placed in storage by Alistair Ross, founder of the Galiano Museum, with the hope that one day it could be reassembled at the entrance to the museum. Architectural plans have been drawn up for a new museum to be built on donated land. Hopefully enough money will soon be raised to cover construction of the museum and restoration of the front range tower.

For a larger map of Porlier Pass Range Rear Lighthouse, click the lighthouse in the above map.

The land surrounding Porlier Pass Range Lights is owned by Penelakut Tribe, and permission to cross their property should be obtained before trying to visit the lights by land. To reach the lights from the ferry landing at Sturdies Bay on Galiano Island, continue straight on Sturdies Bay Road for 3 km (1.8 miles), and then bear left onto Porlier Pass Road and follow it for 24 km (15 miles). At this point, you will reach the Penelakut tribal land and will have a short hike to the rear light. The front light is not easily reached from the rear light, but I understand there is a trail to it.


Porlier Pass was named by the Spanish explorer Jose María Narváez in 1791 after Antonio Porlier, an official in Madrid. And another tidbit of local trivia - Ladysmith, a town mentioned in the above historical information, was the birthplace of Pamela Anderson.