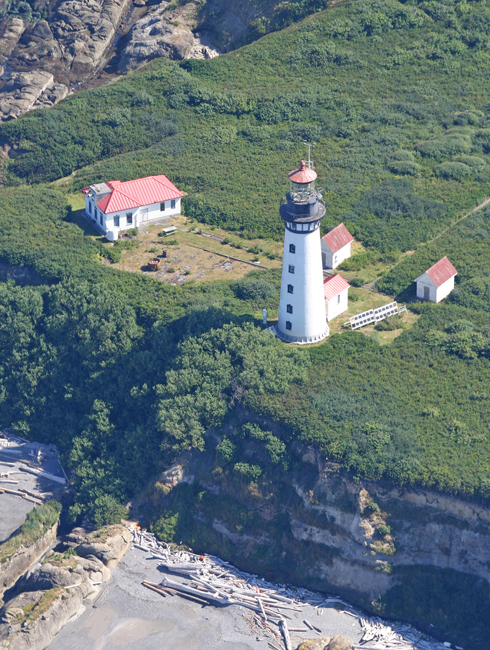 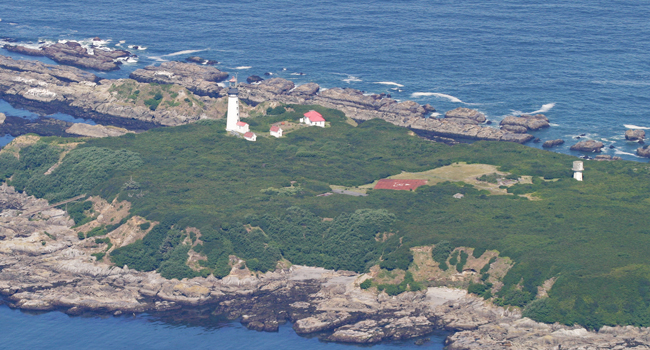 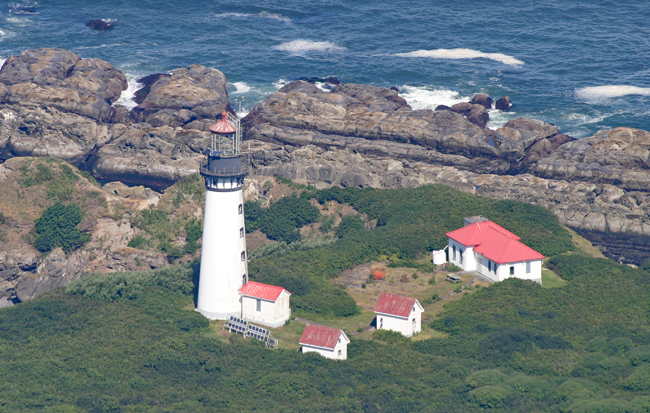 Destruction Island seems an appropriate home for a lighthouse whose main purpose is to prevent the destruction of seagoing vessels on the islands rocky shore. However, the lighthouse, even if it had been standing at the time, would not have prevented the tragic loss of life that occurred nearby and led to the islands name. In 1775, while at anchor under the lee of the island, the Spanish explorer Juan Francisco de la Bodega y Quadra, commander of the schooner Sonora, sent seven men ashore for wood and water. Upon landing, the entire party was killed by Indians, prompting Bodega y Quadra to name the island Isla de Dolores, Isle of Sorrow. The British ship Imperial Eagle visited the island in 1787 and dispatched a long boat to explore the nearby coast. During the exploration, the crew rowed some distance up a river where they too were massacred by hostile Indians. Charles W. Barkley, captain of the Imperial Eagle, named the river Destruction. The name was eventually transferred to the nearby island, and the river was called by its Indian name Hoh.

The thirty-three-acre, tabletop island rises roughly eighty feet above the surrounding water and is bordered by steep bluffs. An executive order issued by the Andrew Johnson administration in 1866 reserved Destruction Island for government purposes.

In 1884, the Lighthouse Board requested $85,000 for establishing a first-order light and fog signal on Destruction Island, but Congress granted just $40,000 for the purpose on March 3, 1885. As a light of any less order would not provide the aid navigators required, work on the project was delayed until Congress appropriated an additional $45,000 on August 4, 1886.

Bids for constructing the dwellings, fog signal building, barn, tramway, cisterns, and oil houses, for erecting the tower, and for furnishing the required metalwork were opened on May 29, 1888, and three separate contracts were awarded. James E. Smith was hired to erect the lighthouse for $11,800, while John Cooper of Mt. Vernon, Ohio was contracted to provide the metalwork for $22,400 and J. & S. Carkeek of Seattle were paid $29,595 to build the keepers dwellings and various outbuildings.

J. & S. Carkeek commenced work in August 1888 but had great difficulty in procuring transportation to the island for the construction materials. The need for a fog signal and light on Destruction Island was punctuated that same month when the sailing bark Cassandra Adams, one of the fastest clippers ever built in the Northwest, ran aground on the islands north reef. The vessel was traveling in a dense fog and struck the reef before the island was sighted. Heavy seas soon battered the ship to pieces, but the sixteen people on board made it safely to the island and then on to the mainland in open boats.

With the two, six-room keepers dwellings and other work complete, J. & S. Carkeek left the island on August 31, 1889, but it was later discovered that the cisterns didnt hold water, the cellar floor in the assistants dwelling was poorly laid, and much of the paint washed off the buildings with the first rain. The contractor was notified of the deficiencies, but when they failed to correct them, the retained percentage of his contract was used to complete the work by hired labor. The first principal keeper, Christian Zauner, arrived on the island 1889 with Thomas Campbell, an assistant, but there was little work for them until the station was completed. Prior to his appointment to Destruction Island, Keeper Zauner had spent three years as an assistant keeper at Tillamook Rock Lighthouse.

An additional $10,000 appropriation was provided on August 30, 1890 to allow construction of the lighthouse, and the concrete foundation for the tower was laid in October. Work on the brick tower, which stood ninety-two feet tall and was covered with a protective cast-iron casing, was completed on November 12, 1891, allowing the Henry-Lepaute, first-order Fresnel lens to be installed in the lantern room. The steam siren, sounding a five-second blast each minute, was placed in operation on November 15, 1891, and the light followed suit on January 1, 1892, when the five concentric wicks of the lamp were set afire. The lens had twenty-four flash panels and revolved atop ten chariot wheels to produce a white flash every ten seconds at a focal plane of 144 feet above the ocean. Every five hours, the keepers would need to wind up the weight that descended sixty-four feet down the tower as it caused the lens to slowly turn.

Four keepers were typically assigned to the station, with two living in each of the six-room dwellings, where were spaced fifty feet apart and located 550 feet east of the lighthouse. During the summer of 1896, six rooms were added to the north side of the assistant keepers dwelling, and, after this time, it was used to house the three assistants while the principal keeper enjoyed his own residence. The small community held its own school for the younger children, and raised chickens, cows, and vegetables to supplement the lighthouse rations delivered to the island.

A small workroom was added to the lighthouse in 1894 to aid the ventilation and drying of the interior of the tower. The keeper declared the work successful as conditions inside the tower greatly improved.

The stations fog signal was in operation around 500 hours each year, while consuming around 30 tons of coal. During the twelve-month period from July 1, 1895 to June 30, 1896, the fog signal sounded an incredible 1,855 hours, or over seventy-seven days. To facilitate the delivery of coal and other supplies, a tramway was installed that ran from the landing on the south side of the island, up the bluff, and then over to the fog signal building, with another branch leading to the dwellings. The need for coal was reduced in 1913, when the fog signal was converted from steam power to oil engines.

John F. Enquist arrived on Destruction Island in 1902, but by 1906 he had worked his way up to head keeper. After having been in charge of the station for five years, Enquist was returning to the island in August 1911 aboard the lighthouse tender Heather when he was killed. Forty-four-year-old Enquist had been on leave in Seattle and was being transported from the Heather to the island in a small boat, when a derrick collapsed and crushed his skull.

As the mainland shore near Destruction Island was sparsely populated and devoid of any natural harbors, the keepers at the station played a critical role in helping any vessels in distress. In 1921, Keeper Albert Beyer rendered assistance to the Myrtle May, which had a scow in tow, and furnished shelter and provisions to its crew and passengers. The following year, Keeper Beyer and his assistants went to the aid of a disabled launch that had been drifting helplessly for twenty hours. The three men aboard the launch were cared for at the station until they were able to leave the island.

The Coast Guard assumed responsibility for the lighthouse in 1939. Those assigned to the station after this typically served for a period of eighteen months, alternating six weeks on the island with a two-and-a-half-week shore leave.

George Wilson lived on Destruction Island in 1945 with his mother, Bernice Pendleton, and his stepfather, Niles Conrad Pendleton, who joined the Coast Guard after having served in World War II. Though George was just four years old at the time, he has vivid recollections of his time at the station. There were five tame deer on the island, and they would come up to the kitchen window and beg for cigarettes, which young George dutifully rolled for his parents. During hunting season, one of the coastguardsman took a rifle, walked up to one of the deer, and shot it. Everyone else at the station was dismayed at the brutal killing, but they did enjoy the fresh venison. George recalls that the Coast Guard provided a large turkey to each family for Thanksgiving, and for some reason, either because the bird was too large for the oven or because his mother didnt know how to cook it, the turkey was placed in a five-gallon pot and boiled on the stove.

The Coast Guard took steps towards abandoning the station in 1963, but protests from mariners stopped the closure. The lighthouse would see five more years of on-site keepers, before being automated in 1968.

The Fresnel lens continued its countless revolutions until it was removed in 1995 and replaced with a modern beacon. The two keepers dwellings are no longer standing. The only remaining companions to the lighthouse are two oil houses and the fog signal building, which has been remodeled to serve as temporary housing for maintenance crews.

The Fresnel lens is now on display at the Westport Maritime Museum, where it is promoted as the finest first-order lens display in the world. While it is a mighty lofty claim, it just might be true. A seventy-foot Lens Building, constructed in 1998, houses the lens, and a ramp partially encircles the display, permitting views at various levels. A skylight above the lens lets natural sunlight dance on the prisms, while the lens slowly rotates, casting its twenty-four spotlights around the room. A backup lens that was formerly mounted atop Destruction Island Lighthouse is also on display.

In April 2008, the Coast Guard, citing that the beacon was no longer being used for navigation, switched off Destruction Island Lighthouse for good. Now with no need for upkeep, the remote lighthouse will surely soon start showing signs of neglect.

Located on Destruction Island, which is three miles offshore from a point on the Olympic Peninsula roughly half way between Cape Flattery and Grays Harbor.
Latitude: 47.67454, Longitude: -124.48689

For a larger map of Destruction Island Lighthouse, click the lighthouse in the above map.