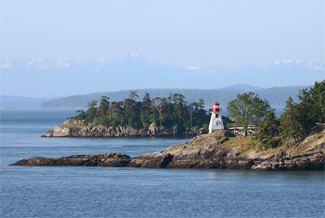 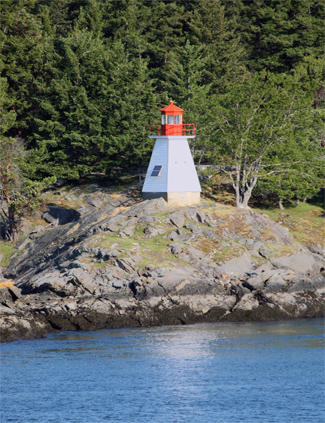 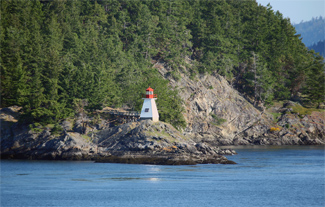 While surveying the Gulf Islands in 1861, Captain Daniel Richardson of the Royal Navy named Prevost Islands eastern extreme Portlock Point after Captain Nathaniel Portlock, who served as a masters mate aboard the H.M.S. Discovery and H.M.S. Resolution in the 1770s. Nathaniel Portlock would later command the King George on a successful fur-trading expedition to the Pacific Northwest from 1785 to 1788.

Today, thousands of visitors view the diminutive lighthouse on Prevost Island as they comfortably slip past the Portlock Point aboard a ferry, but most will remain ignorant of the pain, suffering, and death that occurred at this seemingly peaceful outpost.

An unmanned stake light was established on Portlock Point in 1890 at the request of George Rudling, captain of the steamer Islander, to help vessels make the transition between Swanson Channel and Trincomali Channel on their way between Vancouver and Victoria. Five years later, G. A. Frost built a square pyramidal wooden tower, with a kitchen attached, on the point at a contract price of $870. The tower stood forty-eight feet tall, from base to vane, and exhibited a fixed white light at a focal plane of seventy-two feet with a red sector covering Enterprise Reef. The light, produced by a dioptric illuminating apparatus of the seventh-order, was put in operation on November 1, 1895.

A fog bell, previously used at Active Pass before a fog horn was established there, was suspended in a small wooden tower, painted white and located 900 feet southeast of the lighthouse. The bell was ready for use on September 1, 1896, and when conditions dictated, was struck one blow every fifteen seconds by machinery.

At the time Portlock Point Lighthouse commenced operation, the island was a hunting preserve stocked, at considerable expense, by the Prevost Island Club for the exclusive use of its members. The club initially insisted that they be allowed to choose the lighthouse keeper from amongst their members, but when they learned of the positions meager salary, they allowed the government to appoint John S. Richardson, an intruder, as the first keeper.

Keeper Richardson served for a decade before resigning in 1905 and being replaced by W. J. Gillespie. Little is known about these first two keepers, but George A. Watson, who took charge of the station in 1911, penned many a letter that survived to document his travails at the lighthouse.

From the outset, Watson complained that his annual salary of $460 was insufficient to support his wife and two children. He tried writing Nanaimos Member of Parliament, and when that didnt result in a pay raise, he went straight to the top. In a 1914 letter to John D. Fazen, Minister of the Department of Marine and Fisheries in Ottawa, he provided a detailed description of his duties.

Now my light is a Diamond incandescent petroleum vapour burner, 25 m/m the same as in Active Pass that they class six and is paid over twice as much as I am they say [because] there is a steam operated fog [alarm] there now I have a fog bell to attend a quarter of a mile from my light and when it is in operation I have to travel that every three hours to wind the clockworks to keep it running and that travel is over a bluff of rocks and no shelter from storm and wind in bad weather.

Minister Fazen referred the appeal to George Robertson, the Marine Agent in Victoria, who was incensed at the insubordination and wrote Watson, If you are not satisfied with your position, please send in your resignation as there are a number of people only too pleased to accept it. Watsons campaign apparently did bare fruit, as Portlock Point was reclassified upward resulting in a pay increase for Watson of $90.

In June of 1917, Keeper Watson was so sick that he flew his flag inverted and at half mast, a signal of distress. For four days, he crawled on his hands and knees to reach the fog bell and attend the light before being forced to give up and retreat to his bed. The keeper was reluctant to leave the station, as he had no money to pay a doctor or an assistant to keep the light. Seeing that something had to be done, a friend on Mayne Island chartered a launch and took Watson to a hospital in Vancouver, where he slowly recovered over the next month.

During the summer of 1919, Watson came across a copy of the Family Herald and Weekly Star containing an article on the easy life enjoyed by Canadas lighthouse keepers. Enraged by the gross misrepresentation of his life at Portlock Point, Watson sent a thousand-word indictment of the government to the Stars editor, likening his life to a slave pen, as he was not permitted to leave the station without written permission. He closed his letter with the following lines, Is there any one man that will see his child starve when those men [in Ottawa] has plenty in their larder? No, they will say we must have bread for our children too. There citizens is where the unrest starts whether it ends with bread or blood shed.

Watson urged the editor to print his letter to see if it will help me or hang me [for] I cant live on that salary any longer and if it dont help me it will show some other poor fellow that might be mislead. Watsons reply carried by the Star eventually did pay off as he was awarded a pay increase in 1920 and 1921, but one year before he reached the mandatory retirement age of seventy, he was badly injured at the station in 1924. While trying to reposition a leaky fifty-gallon oil drum, Watson lost his footing, and the drum fell on his abdomen, rupturing him on both sides. He tried to recover at the station, but after a month was forced to fly a distress signal. The local superintendent of lights came to the station, found Watson unfit to carry on his duties, and gave him a month to pack up his belongings. Watson was granted a gratuity of $188.33 in November of 1924, and an annual annuity of $262.29  less than a third of his current wages.

The subsequent two keepers also experienced ill health at Portlock Point, and in 1941 an engineer with the Department of Pensions and Public Health found a contributing factor. A water sample taken from the stations well proved to be highly contaminated, containing a high count of fecal coliform bacteria. A cistern was put in place and fed by a system of gutters and downpipes to collect the rainwater that fell on the stations roofs.

A new dwelling, detached from the light tower, was built at Portlock Point in 1949, and with regular doctor visits, radio, and correspondence school for the keepers children, life certainly had improved at the station. In 1960, reporters from the Vancouver Sun visited Keeper Frank Reddy and his family at Portlock Point and wrote an article entitled, Idyll of B.C. Coast Life, that included this descriptive line, The life the Reddys lead on Prevost is as close to Nirvana, that Buddhist state of perfect beatitude, as most of us will ever come. Though his salary flirted with the poverty line, Keeper Reddy said his biggest mistake in life was that he didnt come to the lighthouse 20 years ago.

Two decades of advancements in technology and improvements at the station had transformed life at Portlock Point from being barely tolerable to highly enjoyable, but that is not the way it would end.

On Sunday, March 1, 1964, James Heanski kissed his wife goodbye and left his home in Victoria to return to his duties at Portlock Point. Two days later, Heanski noticed the beacon on Enterprise Reef was out and included this information with his scheduled weather report at 7:45 p.m. That transmission was the last time anyone heard from James Heanski.

Around 8:15 p.m., eye-witnesses on Galiano and Pender Island, reported a tremendous explosion and a large fireball emanating from the keepers dwelling on Prevost Island. Two B.C. ferries interrupted their regular runs to send staff ashore at Portlock Point, and the Coast Guard tender Sir James Douglas soon arrived with a portable pump. By this time, the dwelling was fully engulfed, but the fire was kept from spreading to other buildings at the station. The following morning, Heanskis charred trunk was discovered in the dwelling's smoldering remains along with fragments of a kerosene lamp that was ruled the cause of the accident.

Portlock Point was fully automated and de-staffed in 1964. The present tower, shorter than its predecessor, was put in place in 1987. A wooden footbridge provides access to the tower from a nearby helicopter landing pad. In 2006, the lighthouse was transferred to Parks Canada, to be added to the Gulf Islands National Park Reserve created under the Pacific Marine Heritage Legacy.

For a larger map of Portlock Point Lighthouse, click the lighthouse in the above map.

Portlock Point Lighthouse is visible from the Vancouver - Victoria (Tsawwassen-Swartz Bay) Ferry or from ferries to Mayne Island or Galiano Island from Swartz Bay. Almost all of Prevost Island is privately owned, but Portlock Point Lighthouse and the surrounding shoreline at Richardson Bay are part of Gulf Islands National Park Reserve. This part of the park is accessible only via private powerboat, sailboat, or kayak.

The lighthouse is owned by Parks Canada. Grounds open/tower closed.