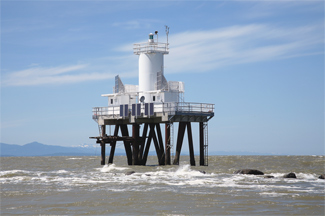 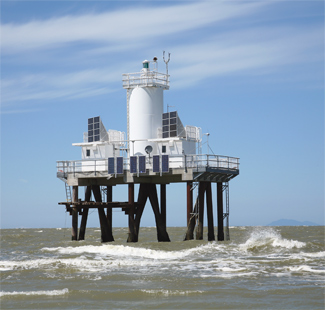 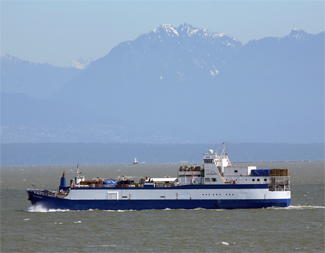 The Fraser River, the longest river in British Columbia, empties into the Strait of Georgia just south of Vancouver, after flowing over 1,300 km (870 miles) from the Canadian Rockies. The river is named after Simon Fraser, who in 1808 led an expedition on behalf of the Montreal-based North West Company from the site of present-day Prince George to the mouth of the river. A small quantity of gold sent to the San Francisco mint in early 1858 by James Douglas, governor of the Colony of Vancouver Island, triggered a stampede of 30,000 prospectors to Victoria, which then had a population of just 500, and from there up the Fraser River to the site of the discovery on the Thompson River. Fearing this influx of Americans might challenge British sovereignty in the region, the Colony of British Columbia was hastily formed on August 2, 1858, with New Westminster, situated on the Fraser River, as its capital. The Colony of the Queen Charlotte Islands merged with British Columbia in 1863, and Vancouver Island followed suit three years later, in 1866.

In the spring of 1859, petitioners demanded a lightship to mark the Fraser Rivers mouth, whose position was ever changing due to the roughly twenty million tons of sediment that emptied into the Strait of Georgia each year. A vessel was finally built in New Minster in 1865, named South Sand Heads, and anchored at the southern side of the entrance to the Fraser River in 1866. A heavy westerly gale in November 1871 severely damaged the vessel, and during the ensuing repairs, its fog bell was removed from the forepart of the ship, to make room for a new windlass, and suspended near the crew cabin. As a result, the keepers were less vigilant in ringing the fog bell, as being so close to the habitable part of the vessel it rendered existence almost insufferable. According to an 1872 report, the lightship was equipped with eight Argand lamps, and its hull was painted red.

On April 20, 1878, the South Sand Heads lightship capsized during a heavy gale and had to be removed from the station during May and June for repairs. While overhauling the vessel, it was discovered that the lantern mast was decayed, and that her topsides and the greater portion of the deck frame had dry rot. Correcting these issues would have required too great an outlay, so the ship was simply patched up, given a new anchor and chain, and returned to its station, where it was thought she could serve another five years. In September of the following year, however, the lightship was deemed no longer serviceable, withdrawn from her station, and offered for sale. The schooner Eliza was placed on the station under contract starting on May 4th, 1880, until a lighthouse could be built to mark the river entrance.

After parliament appropriated $14,000 for Sands Head Lighthouse, a contract for its construction was awarded to Thomas McKay of New Westminster at a price of $9,500. The lighthouse consisted of a hexagonal wooden tower, forty-nine feet high from its base to the vane on its lantern, which rested on an iron screwpile foundation. A fog bell formerly used at Race Rocks was attached to the structure to be sounded during thick and foggy weather, and a third-order Fresnel lens, producing a fixed-white light at a focal plane of fifty-two feet, was mounted in the lantern room.

Sands Head Lighthouse commenced operation in May of 1884. John Sproat was appointed its first keeper, but when he declined the position, Hugh H. Fraser was placed in temporary charge of the light. Tragically, Mr. Fraser and his assistant, Frederick Williams, drowned after just a short time at the light.

Forced to live in close quarters, the keeper of Sand Heads Lighthouse and his assistant either learned a great deal of toleranceor didnt. In April of 1892, a breathless assistant keeper arrived in Vancouver with reports of the abuses he had endured at the hands of a drunken keeper, likely R.S. Jones. After the keeper had fallen asleep, the assistant attempted to escape in the stations rowboat, only to have the keeper awaken and heave a sandbag at him from the tower. Captain Lewis of the lighthouse tender Quadra tried in vain to convince the assistant to return to the station but finally had to sail out to the lighthouse, remove the keeper, and place two of his crewmembers in charge of the light.

Hamilton Armour was keeper at Sand Heads from 1892 to 1897 and was instrumental in saving the lives of several fishermen. During the spring freshets, large quantities of driftwood floated down the Fraser River. The marine agent reported witnessing trees of 10 and 12 feet in diameter, and sometimes exceeding 200 feet in length, studded with branches, and with roots large enough to cover the side of a moderate sized house lodging against buoys in the river. Such flotsam posed a serious threat to the lighthouse, and over the years clumps of piles or dolphins were driven into the riverbed to protect the towers iron pile foundation from drift timber and ice.

By 1905, the shifting sands at the mouth of the river had moved the main channel more than a mile from Sand Heads Lighthouse, and the authorities paid $1,000 to the Victoria Sealing Company for an old schooner, the Mermaid, to be used as a lightship. The vessel was overhauled, equipped with anchors and chains and other accessories at a cost of $9,778.90, and placed on station on October 18, 1905, with Michael OBrien, a veteran of the U.S. Lighthouse Service, in charge. The wooden vessel was painted red with the words Sand Heads in white on the forward bulwarks. Her bottom was coppered, and her upper works painted light gray. The light from an anchor lens lantern was displayed at a height of fifty-six feet from the foremast, and a fog bell, positioned just forward of the same mast, sounded once every ten seconds when needed.

Sand Heads Lighthouse was discontinued with the establishment of the lightship, and in 1912 a crew under the direction of C. Fischer was sent out to dismantle the tower. The Marine Department had hoped to reuse the wooden tower elsewhere in the province, but it was so difficult to detach from its foundation that it was instead doused with kerosene and burned.

In 1913, the schooner Thomas F. Bayard was purchased for $4,500 to replace the Mermaid, which Keeper OBrien noted leaked like a basket. The Bayard was constructed in Brooklyn in 1880 and served as a pilot boat in New York Harbor until she sailed through the Panama Canal and began transporting prospectors and freight to Nome during the Klondike gold rush. Later, she hauled coal between Nanaimo and Seattle and was finally being used as a sealing vessel before being purchased by the government. A one-inch diaphone plant was installed on the vessel, along with a submarine bell, and she was christened Sand Heads No. 16 for her new career.

OBriens twenty years of service aboard the lightship ended in 1924, but Sand Heads No. 16 would remain at her station for just over three more decades with Captain E.L. Janes in charge. Aluminum reflectors were installed on one of her masts so the vessel would appear on radar screens at a distance of up to seven miles. Later, the lightship was equipped with electric lights.

Captain Janes told a reporter that the lightship was rammed by freighters lost in fog on at least three occasions. " 'Was I alarmed?' Not very much," said Janes. "That sturdy oak vessel took everything. I don't think any other type of craft could have survived such a remarkable career."The lightship was driven ashore in 1947 and 1955, neither time with any loss of life, but after the second grounding, repairs were determined to be too expensive, and another lighthouse was constructed on the northern side of the rivers entrance.

Subsequent owners of the Thomas F. Bayard had plans to restore her to sailing condition, and in 1978 this responsibility was passed on to the Vancouver Maritime Museum, which purchased the former lightship. The task proved too costly for the museum as well, and on September 6, 2002, the deteriorated vessel sank at her mooring. Pieces of the vessel were salvaged, and a portion of its mast is on display in the museum.

Located at the end of the Steveston Jetty, a long breakwater on the north side of the entrance to the Fraser River.
Latitude: 49.1059, Longitude: -123.3033

For a larger map of Sand Heads Lighthouse, click the lighthouse in the above map.

Sands Head Lighthouse is not accessible from shore and is best viewed from the water. Whale Watching and Eco Tours offered by Steveston Seabreeze Adventures should pass by the light.