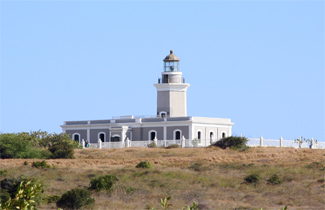 During his second voyage to the New World, Christopher Columbus sailed along the southern coast of Puerto Rico before landing to replenish his water supply somewhere on the islands west coast on November 19, 1493. Though the exact point of his disembarkation is uncertain, the towns of Aguada and Aguadilla seem the most likely candidates, though Mayaguez and Boqueron are also listed as possible sites. While rounding the southwest point of Puerto Rico, it is believed that Columbus bestowed the name Cabo Rojo on the cape due to its limestone cliffs tinged red by minerals. Columbus never returned to Puerto Rico, but Ponce de Leon, a member of the landing party in 1493, returned fifteen years later with an army of fifty to settle Puerto Rico, which had been given the name San Juan Bautista by Columbus. The Spanish colonists soon took control of the natural salt flats on Cabo Rojo from the Taino Indians, making salt mining the oldest industry on Puerto Rico.

After the United States gained control of Puerto Rico through the Spanish-American war in 1898, the U.S. Lighthouse Service was directed to take charge of all Puerto Rican lighthouses on May 1, 1900. Inspections were made of all the light stations and any necessary repairs were carried out. The following description of Cabo Rojo Lighthouse was included in the Annual Report of the Light-House Board for 1901.

This light is of the third order, flashes white every minute, is 121 feet above high water, is visible 18 miles, and is shown from an hexagonal dark-gray tower attached to a one-story flat-roofed gray dwelling, which has green blinds and white trimmings. The tower is 40 feet high from its base, was commenced in 1878 and was finished in 1882 by the Spanish, at a cost of 14,900 pesos. It is used to guide along the southerly coast of Puerto Rico and to the Mona Passage. The lamp and revolving machinery were overhauled and repaired as practicable, but they are still in bad condition. The floors and walls were cemented, the plumbing and sewer were overhauled and two bevel-gear wheels for the lens clock were furnished, and the clock was repaired. In February 1901, the lamp, which gave out, was replaced temporarily with a regulation type table stand lamp, which is still in position, awaiting a new lamp, which is to be sent from the general light-house depot. A duplicate of the machinery, which has been ordered from France, is expected to arrive quite soon.

The layout of Cabo Rojo Lighthouse, which was the third lighthouse built in Puerto Rico, is very similar to those at Arecibo and Cabo San Juan. The one-story dwelling measures 90x 37, and its entrance is located on the north side of the structure, opposite the tower. On the left and right side of the entrance hall or vestibule were doors that opened into identical five-room apartments for the keepers. The five rooms consisted of two bedrooms, a kitchen/dining room, a bathroom, and a living room. Walking straight through the vestibule, one would find two rooms just before the steps that led up to the tower entrance. On the left was a storeroom, while an engineering room was on the right. A spiral stairway in the storeroom led to a circular oil room with a vaulted roof positioned beneath the tower. Just east of the lighthouse is a cistern, used to store precious water for the keepers.

A cast-iron spiral staircase leads up the hexagonal tower to the lantern room. The tower has two windows that face south towards the sea, and one door, located partway up the tower, that opens onto the dwellings roof, which was used to collect water for the keepers. The lantern room originally housed a third-order Fresnel lens of Sautter, Lemonnier & Cie. design that was equipped with several flash panels and revolved to produce white flashes. A drop tube, located inside the walls of the stairwell, contained a 200-pound weight that was cabled to a clockwork mechanism for controlling the revolution of the lens. The weight-driven mechanism was replaced by an electric motor in 1960.

On August 11, 1915, a hurricane, which would strike Galveston, Texas a few days later and kill roughly 300 people, passed just off the southern coast of Puerto Rico. Keeper Jose Escalera Velez and his assistant, Arturo Machicote Ferrer, were commended by the Lighthouse Service for rescuing three men, who were out in a small boat about a mile from the station, and caring for them until the storm passed.

In 1959, the living quarters were updated with modern bathroom facilities that were installed in one of the two bedrooms in each apartment. The storeroom and engineering room were converted into kitchens, and the rooms in the southeast and southwest corners that had formerly functioned as kitchens were made into bedrooms.

The keepers did not get to enjoy these upgraded accommodations for long as the light was automated in 1967 and the lighthouse was sealed up to prevent vandalism of its interior. Deprived of its keepers, the lighthouse steadily fell into disrepair, until a three million dollar renovation was initiated in 2002. Cabo Rojo Lighthouse, returned to near original condition and painted in its historically accurate colors, opened to the public in March 2007.

While most lighthouses that are open to the public nowadays are typically a historical museum focusing on the story of the lighthouse and its keeper, Cabo Rojo Lighthouse is more of an art museum. An artist decorated the interior of the lighthouse using Homers Odyssey for inspiration. The walls of the various rooms are supposedly covered with pages from the Odyssey (though one of the few pages I found in English is actually from Walt Whitmans Democractic Vistas). Affixed to these papered walls are chairs, to each of which with is strapped a different edition of the Odyssey. Overhead, an audiovisual system is capable of projecting words from the Odyssey on the walls, while playing aloud readings from the epic poem.

For a larger map of Cabo Rojo (Los Morrillos) Lighthouse, click the lighthouse in the above map.

From Route 2 south of Mayaguez, turn south on Route 100 and continue through Cabo Rojo and Boqueron for 16 km (10 miles) then turn right on Route 301 and continue 13 km (8.1 miles) to reach Cabo Rojo Lighthouse. The lighthouse is open Thursday to Tuesday from 9 a.m. to 4:30 p.m. and can be reached by calling (787) 851-1025. A 10 to 15 minute walk is required to reach the lighthouse or you can ride a trolley. Visitors are allowed to climb the staircase to the roof from which a spectacular view of the surrounding coastline can be had.

The lighthouse is owned by the U.S. Coast Guard and managed by Municipio de Cabo Rojo. Grounds/tower open.


I asked if school children came to the lighthouse to sit on the chairs and read the Odyssey, but I was informed the setup is more artistic than educational. The audiovisual system was not functioning during my visit, but may be modified to project significant sites around Puerto Rico. While the Odyssey theme is certainly interesting, it would be nice to see at least some of the rooms of this beautiful lighthouse dedicated to the rich history of the area and the lighthouse itself.

I had low expectations when, after my trip to Puerto Rico, I sat down to watch Wuthering Heights, an MTV made-for-TV movie that I heard showed the Cabo Rojo Lighthouse. While I didnt care much for the storyline, the acting, and most of the music, the film does contain a significant amount of footage shot in and around the lighthouse that might just justify devoting 88 minutes of your life to it. The movie was filmed entirely in Puerto Rico and deals with a family who lives in the Cabo Rojo Lighthouse, which they call The Heights. Since it was released in 2003, the film must have been shot just before the lighthouse underwent its major renovation - it would be interesting to know if any usage fee for the lighthouse went towards the restoration.

There are numerous shots of the exterior of the lighthouse, some of which show the lower window in the tower being used as a door as seen in the black and white photograph on this page, but it was all the footage of the interior of the lighthouse that surprised me. The circular stairway and several rooms are shown in scenes that include a family dinner, a major party, and a fight or two.