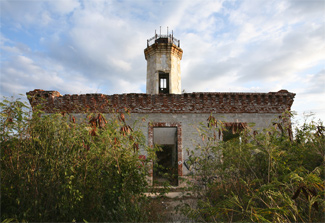 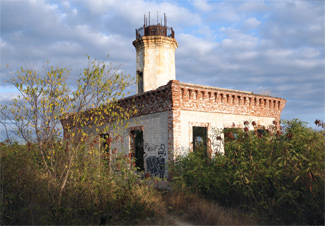 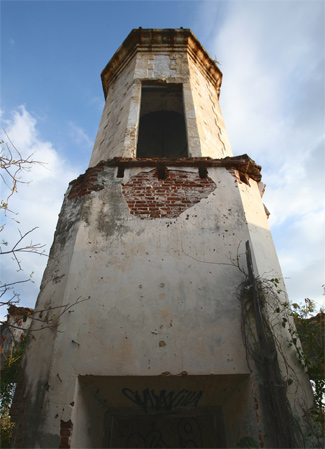 A survey report from 1897 provides the following description of Guanica Bay. About 15 miles eastward of Cape Rojo, the south-west extremity of the island of Puerto Rico, is the harbour of Guanica, which is considered to afford the best anchorage on this coast. Here vessels can anchor in 4 ½ to 2 ½ fathoms on sand and gravel; the latter depth being at the farther end of the harbour. With its entrance defined by Point Brea on the west and Point Meseta on the east, Guanica Bay was an important port with its exports at the time of the survey including sugar, coffee, maize, cotton and starch. The Spanish began work on a lighthouse on Point Meseta in 1892 to mark the entrance to Guanica Bay and to bridge the gap between the lights at Cabo Rojo and Coffin Island. This sixth-order, fixed-white light was first activated in 1893 and could be seen for eight miles from its lofty perch of 117 feet above high water. Guanica Lighthouse, consisting of a one-story dwelling with an octagonal red brick tower projecting from its flat roof, was built to house a single keeper and was almost identical to the original Point Higuero Lighthouse.

The main entrance to Guanica Lighthouse was on the north and opened into a vestibule. The coat of arms of the Corps of Road Engineers was built into the parapet above the main entrance. On the west side of the structure were two bedrooms for the keeper and a bathroom, while a living room, engineers room, and a kitchen/dining room were found on the east side. A square storeroom was located on the south wall, on the opposite side of the tower from the vestibule. A winding spiral staircase led to the octagonal lantern room, which was surrounded by a cement gallery and a cast-iron balustrade. The original illumination apparatus used in the tower was a sixth-order, Fresnel lens supplied by Sautter, Lemonnier & Cie.

When contemplating a landing point for the invasion of Puerto Rico during the Spanish-American War, Major-General Nelson A. Miles first considered Port Fajardo or Cape San Juan on the north coast of the main island. However, when he learned that the enemy was apprised of the plan, he sent a letter to Captain Francis J. Higginson of the U.S. Navy in which he made the following proposal. As it is always advisable not to do what your enemy expects you to do, I think it advisable after going around the northeast corner of Porto Rico, to go immediately to Guanica and land this force.

On July 25, 1898, Robustiano Rivera, keeper of Guanica Lighthouse, spotted the approaching flotilla of American ships and immediately alerted the barrio. All residents of Guanica, save eight men who welcomed the invaders, abandoned their homes and fled to Rivera Yauco where they broke the news to the citys mayor. After landing at Guanica, American forces quickly marched on to secure Ponce and other cities. As troops were moving northward towards San Juan and Fajardo, Spain sued for peace, and hostilities on Puerto Rico halted on August 12, 1898. The war officially ended with the signing of the Treaty of Peace in Paris on December 10, 1898.

The U.S. Lighthouse Service was directed to take charge of all Puerto Rican lighthouses on May 1, 1900, and it soon inspected all the stations and planned for any necessary repairs. The following description of the work done on the Guanica Lighthouse was included in the Annual Report of the Light-House Board for 1901. The walls, ceilings, floors, and exterior walks were repaired with cement. A stone rubble wall was built to protect the dwelling from the wash of sand and gravel during the rains.

The Lighthouse Service regrets to report the death of Domingo Suarez Rosa, retired keeper in the ninth lighthouse district, Porto Rico, on July 24. He was retired on July 1, 1925, at the age of 62 years, on account of physical disability, after having served for 26 years in the Lighthouse Service of the United States and 12 years in the Spanish Lighthouse Service at the following lighthouses: Port San Juan, Cape Rojo, Point Figuras, Mona Island, Guanica, and Port Ferro. Faithfulness and loyalty to the service, combined with cheerfulness in the performance of his duty, were characteristic of the life of Keeper Suarez. He counted as his friends all under whom he served in the Lighthouse Service on the island of Porto Rico and will be remembered by all for his kindly manner.

On September 6, 1937, an earthquake caused some damage to Guanica Light Station. The tower sustained damage near the lantern floor level, leaving it in an unsafe condition. The Lighthouse Service, in reported the event, noted that plans had been made prior to the earthquake to move the light to a new structure more advantageously located.

Sadly, the historic structure has been repeatedly vandalized and is now practically in ruins, though some parts of its unique architectural elements are still visible such as the white and gray Genoa marble slabs used in the flooring, the exterior gray lime stucco imitating granite blocks, the exposed brickwork in the cornice and around the windows and doors, and the quoining and balustrade on the tower. Most of the lantern room and roof are now gone along with the entire lace-like parapet that was constructed with red brick atop the dwelling.

As has been demonstrated at Point Figuras, it is possible to bring a lighthouse back from near ruins, but unless such action is taken soon at Guanica, this unique treasure may be lost. The Guánica municipality and the Department of Natural Resources signed an agreement in 2007 to restore the lighthouse, and in 2012, there were reports that work on the lighthouse was to begin in 2013. It seems nothing came of these attempts to save the lighthouse, and on January 7, 2020, an earthquake caused most of what was standing of the lighthouse to collapse. The ruins will now most likely slowly deteriorate until little is left of the lighthouse.

For a larger map of Guánica Lighthouse, click the lighthouse in the above map.

The lighthouse is owned by the Puerto Rico Department of Natural Resources. Grounds open, tower closed.


A map of Puerto Rico that I picked up somewhere on my trip had two lighthouse icons placed near Guanica. I was sure one of them was the historic Guanica Lighthouse, but wasn't positive what the other one might be. I stopped at the harbor and showed the map to some police officers and locals who all agreed that the second faro must be this range light located in the harbor. After solving that mystery, I noticed this monument, also located in the harbor, that honors the veterans of the Spanish American War and was erected on the 40th anniversary of the landing of the American forces in Guanica.