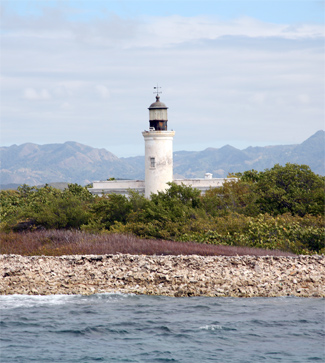 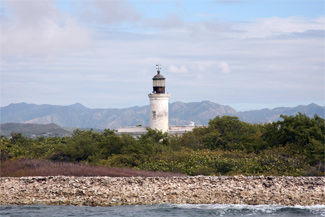 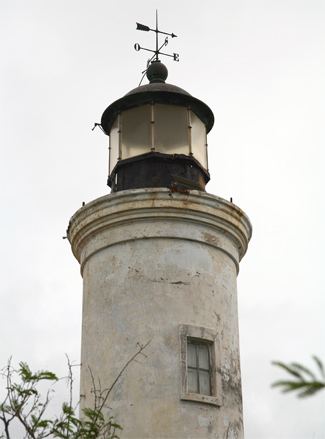 When American forces made their first landings on Puerto Rico during the Spanish-American War, they chose to use the south shore, which was poorly defended, instead of San Juan. On July 25, 1898, the Gloucster sailed into the harbor at Guanica and captured the village, which was defended by thirty Spanish regulars. Two days later, the Dixie, Annapolis, Wasp, and Gloucster steamed to Ponce, and after encountering no resistance upon entering the harbor there, a Lieutenant Merriam was sent ashore with a flag of truce to demand the surrender of the city. The Spanish garrison had retired on the approach of the Americans, and an official surrender of Ponce was not worked out until the following morning. The Spanish likely deactivated the lighthouses of Puerto Rico during the war as a report on the operations of the U.S. Army in Puerto Rico notes that the light-house on Cardona Island was relighted on the evening of the 29th (of July, 1898) and that on Caja de Muerto was relighted on the evening following. The Americans found that the lighting apparatus and oil were still in place on Cardona Island and the former light keepers were willing to resume work under the same terms they had with the Spanish.

Even with Cardona Island Lighthouse now active, the Columbia ran aground on a coral reef projecting from the island upon arriving at Ponce on July 30. The commander of the U.S. fleet wisely suggested that two vessels be sent to Puerto Rico as soon as possible to conduct a survey of the southern coast and harbors and that a buoy be set just south of Cardona Island, where the Columbia grounded.

Shortly after the U.S. Lighthouse Board had assumed control of Puerto Ricos lighthouses, it included the following description of Cardona Island Lighthouse in its Annual Report of 1901.

This sixth-order fixed red light is 46 feet above high water, is visible 7 ½ miles, is shone from a cylindrical tower in the center of the front of a one-story flat-roof dwelling which is blue with white trimmings. The tower is 31 feet high from its base, was commenced in 1887 and was finished in 1889 by the Spanish, at a cost of 11,760 pesos, and is used to guide to the entrance of Port Ponce. The cracks in the walls, the roof, and the exterior walk were repaired with cement; the grounds about the dwelling graded, locks fitted to three doors, the cistern was repaired, and new chains were fitted.

The 53 x 43 Cardona Lighthouse was built of stone and brick and intended for one second-class keeper. The main entrance to the structure is in the middle of its northern side while the cylindrical tower is located on the opposite side. A cast-iron stairway leads to an octagonal lantern room that is surrounded by a cement gallery and cast-iron balustrade.

A reinforced-concrete oil house was finished at Cardona Island Lighthouse in early 1914 at a cost of $370.72. In 1922, the light was changed from oil to acetylene at a cost of $1,025. The lighthouse was automated in 1962, and the dwelling sealed up to prevent vandalism.

The original sixth-order Fresnel lens, manufactured by Sautter, Lemonnier & Cie., was still in use in the late 1970s.

For a larger map of Isla de Cardona (Cardona Island) Lighthouse, click the lighthouse in the above map.

Cardona Island is only accessible by private boat, but you can get a distant view of its lighthouse from the observation tower at La Guancha boardwalk in Ponce and from the Ponce Yacht Club.


Due to time constraints, I hired a local fisherman to take me out to Coffin Island rather than take the ferry that goes out on the weekends. This allowed me to go ashore on Cardona Island as well, but that adventure was a disappointment as the vegetation has grown right up to the lighthouse making it basically impossible to get a decent picture of the lighthouse from close up. The best views of the lighthouse are definitely from the water.

The captain brought along a couple friends, and while I was ashore on Coffin Island, one of them spent an hour or more free diving for lobsters and anything else that was edible. Here is a photograph of his good-sized haul.