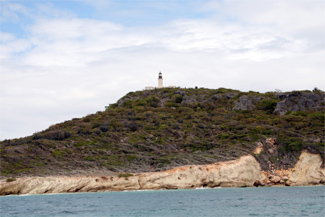 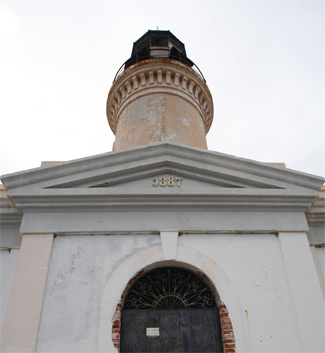 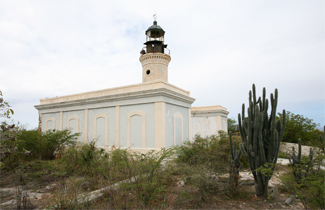 There are a few explanations of how Isla Caja de Muertos, or Coffin Island, got its name. The shortest and perhaps least interesting one is that a French Explorer thought the outline of the island resembled a coffin on a table, but a more dramatic tale involves the nineteenth century Portuguese pirate, Jose Almeida. Almeida became enamored of a Basque lady in Curacao, married her, and took her off to sail the seas. Tragically, the new bride refused to remain below decks during her first raid experienced aboard the pirate ship and was killed by gunfire. Almeida sealed his brides embalmed body in a glass box, protected by a copper coffin that he placed in a cave on a deserted island near Ponce. Each month, Almeida would return to the island, pay his respects to his true love, and leave a part of his newly acquired treasure with her. Years after the pirate Almeida was executed in Puerto Rico for his plundering, a Spanish engineer gave Coffin Island its name after discovering the cave containing the coffin of Almeidas wife. Coffin Island and the rest of Puerto Rico was wrested away from Spanish control in 1898 by the United States, and shortly thereafter the Lighthouse Board recorded the following description of Muertos Island Lighthouse in its annual report.

This light-station is on the summit and in the center of Muertos Island. The light is fixed white, varied by a white flash every three minutes, is of the third order, is 297 feet above high water, and is visible for 18 miles. It is shown from a cylindrical tower on the center of a one-story, flat-roofed dwelling, which is gray with white trimmings. The tower is 41 feet high from its base. The light was begun in 1882 and was finished in 1885 by the Spanish, at a cost of 39,412 pesos, and it is used as a guide along the southerly coast of Porto Rico. The lamp and clockwork of the lens were repaired, a new cover was fitted to the cistern, the windows were repaired, the walk around the building and exterior and interior walls were cemented and the lens clock was repaired.

In 1902, the Lighthouse Board built new boat ways and a boat landing for the station, erected boundary posts around the site, fitted new locks and bolts to all windows and doors, and installed a new Hear air pressure lamp. The lighthouse was located about three-quarters of a mile from the landing and was reached via a steep, winding, rocky, and difficult trail.

The I-shaped Muertos Island Lighthouse is unique amongst the lighthouses of Puerto Rico. The main entrance is located in the middle of the vertical portion of the I, which runs east-west, and opens into a small corridor across from which is located the entrance to the base of the tower. Positioned on the opposite side of the tower is an oil room, while to the right of the tower as one enters the lighthouse is an engineers room and to the left of the tower a supply room. In the top and bottom portions of the I, which run north-south, are found two keepers apartments, each consisting of a living room, two bedrooms, a kitchen/dining room, and a bathroom.

A spiral stairway leads up the cylindrical tower to a lantern room in which was housed a third-order Fresnel, equipped with three flash panels and manufactured in France by Sautter, Lemonnier, & Cie. A clockwork mechanism, powered by a weight suspended in the central column of the stairway, revolved the lens to produce a distinctive flash pattern.

On August 11, the eye of the 1915 Galveston Hurricane, one of the costliest hurricanes to strike the United States, passed just south of Puerto Rico. Jose Medrano was serving as assistant keeper of the lighthouse at the time, and when he realized the stations launch would be lost if not taken to a place of safety, he hastily made a nine-mile trip to Ponce Harbor and beached the boat.

Alfonso Sanchez Bermudezs service at Muertos Island Lighthouse is documented in several sources. On August 12, 1916, Keeper Bermudez and his assistant Antonio D. Jesus rescued a man whose boat was in a sinking condition near the island. Three months later, Bermudez and Jesus rescued a man whose boat became disabled during a storm and provided him food and shelter at the lighthouse until the storm abated. Bermudez was commended for his bravery displayed while rescuing a sailor off the sailboat Juanita from drowning on September 21, 1916 and for keeping him at the station for three days until weather conditions improved.

During the earthquake that struck the northwest coast of Puerto Rico in 1918, Keeper Bermudez noted that roughly an hour after the earthquake struck, the sea receded and then returned at Coffin Island, covering about 15 meters of beach above the normal shoreline. This surge was much less than that which caused significant damage at Point Borinquen Lighthouse.

On June 13, 1922, an unconscious man was brought to the lighthouse suffering from a serious wound in his arm. Keeper Bermudez rendered first-aid treatment and later reported the matter to his superiors: At 5 p.m. on this date a man by the name of Juan Cruz was brought to the station, being unconscious. He had a 3 1/2-inch wound in his left forearm so deep that it cut through tendons, veins, and tissues, causing a great hemorrhage. The undersigned furnished him first aid, it being necessary to stitch up the wound in order to stop bleeding, and take him immediately to Ponce, where he could have medical attention.

On December 10, 1924, Keeper Bermudez rendered assistance to the occupants of a disabled fishing boat that was discovered near the station.

Finally, in 1926, the Lighthouse Service Bulletin noted that during the tropical hurricane that struck Puerto Rico on July 22 of that year Keeper Bermudez sheltered 7 persons from the shipwrecked fishing boat Pluma del Mar and also took in 20 persons, including 12 children, living near the station in houses unroofed by the storm.

When Keeper Bermudez was not assistant those in need, he was must have been diligently maintaining the station as he was awarded the efficiency flag for having the model station in the district for 1917, 1924, and 1926. Bermudez was in charge of the lighthouse for roughly twenty years.

In 1945, a 500mm lens was placed in the lantern room of the Coffin Island Lighthouse, the light was automated, and the structure boarded up.

For a larger map of Isla Caja de Muertos (Coffin Island) Lighthouse, click the lighthouse in the above map.

Island Venture makes a trip to Coffin Island on Saturdays and Sundays and can be reached at (787) 842-8546.


In 1986, the Aurora Lodge Number 7 of Ponce, Puerto Rico placed a monument on Coffin Island to mark the place where local Masons first met. The inscription on the monument reads (according to my translation): Due to the persecution of the Spanish government at that time, Aurora Lodge Number 1 (todays Aurora Lodge Number 7) was established on Coffin Island on April 12, 1871 with its founder and first venerable maestro José Rafael Alomar Famania. The secretive nature of the Masonic rituals led Spanish authorities to suspect the early Masons of subversion. Ten Masons from Ponce thus met secretly on the island for several years until in 1887, a government decree recognized the masons and allowed them to meet openly.