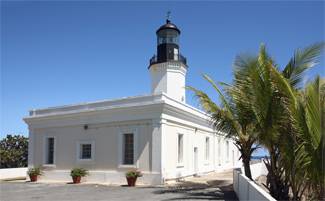 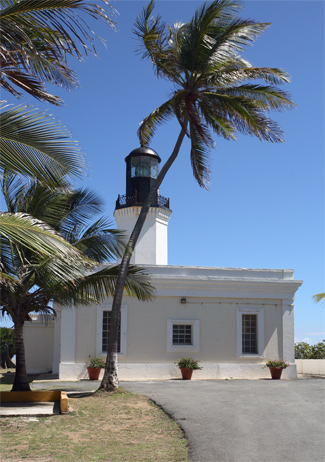 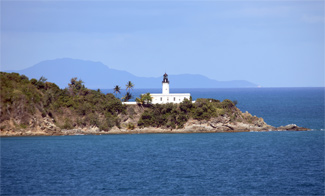 Punta Tuna, a narrow rock formation projecting into the Caribbean Sea on the southeast shore of Puerto Rico, seems the ideal spot for a lighthouse. Its elevation naturally increases the visibility of a light, and its dimensions are just enough to comfortably hold a lighthouse. Built by the Spanish, Punta Tuna Lighthouse helps mariner round the southeastern corner of Puerto Rico by serving as the easternmost light on the islands southern shore, and the southernmost light on the islands eastern shore. After the United States won control of Puerto Rico through the Spanish-American war in 1898, the U.S. Lighthouse Service was directed to take charge of all Puerto Rican lighthouses on May 1, 1900. Inspections were made of all the light stations and any necessary repairs were carried out. The following description of Punta Tuna Lighthouse was included in the Annual Report of the Light-House Board for 1901.

The light consists of two flashes in group, every 2 minutes; each flash is 7 ½ seconds long. One eclipse is of 15 seconds and the other 90 seconds. The light is of the third order, is shown 110 feet above high water, and is visible for 18 nautical miles. It is shown from an octagonal white tower on a square, dark gray, one-story flat-roof dwelling with white trimmings. The tower is 43 feet high from its base. The light was begun in 1891 and was finished in 1893 by the Spanish, at a cost of 26,500 pesos. It is used to guide along the easterly and southerly coast of Porto RicoIn March, 1901, the rain-water cistern was repaired, as it leaked so badly that the keepers were without water except such as was brought from a distance. Strainers were fitted to the water leaders; the road to the landing was graded and repaired; the road and sewers, the interior walls and the coping of the tower, the floors, and exterior walks were repaired. The lens machinery was also overhauled; the plaster in the dwelling was patched and repaired; the oil-room floor was recemented; leaks were stopped in the roof, and the door of the dwelling was repaired.

The entrance to the lighthouse faces east and provides access to a vestibule off of which are found two symmetrical keepers quarters, one to the right and one to the left, and the stairs that lead up to the centrally positioned tower. Each keepers quarters consisted of a living room, two bedrooms, a kitchen/dining room, a bathroom, and a storeroom. Passageways flank both sides of the tower, with the one on the south leading to the storeroom, which connects to an oil room behind the tower. The hall on the north side of the tower leads to the engineers room.

Though the exterior of the tower is octagonal above the dwelling, inside the dwelling it has the form of a square with two clipped corners. A cast-iron circular stairway winds 14.5 meters up the tower and provides access to the lantern room, which is surrounded by a cement gallery and cast-iron balustrade. A third-order Fresnel lens, manufactured in France by Barbier, Benard & Cie. and equipped with two sets of double-flash panels, was mounted in the lantern room. A 200-lb weight, suspended in the central column of the stairway and attached to a clockwork mechanism, provided the force to revolve the lens and produce the lights unique double-flash characteristic.

By 1930, the rotation of the lens was sped up so the lens completed one revolution in thirty seconds instead of two minutes. In 1935, a new reinforced concrete dwelling was built, and the station was modernized and completely electrified.

Pedro Albino Jr. was born at Punta Tuna lighthouse in 1919, while his father, Pedro Albino Sr. was serving as assistant keeper. Pedro Abino Sr. served at six different lighthouses, where most of his eight sons were born, and during his career championed salary increases for keepers. Pedro Sr. served in World War I before joining the Lighthouse Service, and Pedro Jr. followed in his fathers footsteps, serving in World War II before joining the Coast Guard in 1946.

It was an emotional moment for Pedro Jr. when in 1947 he was assigned Officer-in-Charge of his birthplace, Punta Tuna, with nine men under his command. In October of that year, a violent thunderstorm passed over the station. His wife quickly gathered in some clothing near a pole that supported a transformer, and seconds after she returned to the lighthouse, a bolt of lightning struck the transformer, causing it to explode. Without electricity, the light and radio beacon were useless, so Pedro Jr. rushed to town and called the Coast Guard to have them send out a technician.

While awaiting the arrival of the technician, Pedro Jr. picked up an electronics manual and managed to have the radio beacon and light restored by just after midnight. When the technician arrived, he asked why Pedro Jr. had called for help as Pedro seemed to know more about the equipment than he did. Pedro Jr. received a commendation letter from the commander of the Tenth Coast Guard District that lauded the zeal and initiative displayed while taking the expeditious action required to resume normal operation of the station.

George Van Parys was so appalled at the condition of Punta Tuna Lighthouse in 2006 that after his visit he sent letters to the Coast Guard, National Park Service, and General Services Administration describing the neglected status of the structure and inquiring what he could do to help. He was informed that the lighthouse was eligible for transfer to a qualified government or non-profit agency under the provisions of the National Historic Lighthouse Preservation Act, but that a timetable for this action had not been set.

In anticipation of the availability of the lighthouse, George and his wife formed the Tuna Point Lighthouse Association whose mission is to restore and preserve the structure and open it up to educational and cultural activities. One unique aspect of the groups plans is the mounting of internet-controllable cameras on the property so that visitors from around the world could remotely view the lighthouse. Inspired by a historic map that showed how the original system of lighthouses covered the entire coastline of Puerto Rico, Van Parys believes that cameras installed at lighthouses could now be a vital part of homeland security.

Before Pedro Jr. passed away, he lamented the state of abandonment Punta Tuna Lighthouse was in, remembering how the station shined like a porcelain cup when he was in charge. It was his dream that the town of Maunabo promote the lighthouse as a permanent tourist attraction, where exhibits of paintings, photographs, and other crafts could be displayed. His dream is starting to be realized as since late 2006 the community of Maunabo has been opening the lighthouse grounds to the public on a regular basis and is also working towards gaining ownership of the lighthouse.

In 2009, Punta Tuna Lighthouse was offered to qualified government agencies and nonprofit organizations under the provisions of the National Historic Lighthouse Preservation Act (NHLPA) of 2000, but this turned out to be premature as the property had not been excessed by the Coast Guard. Punta Tuna Lighthouse was again offered under the NHLPA in June 2011, and qualified entities were given sixty days to submit a letter of interest. On October 17, 2012, National Park Service Director Jon Jarvis announced that the lighthouse would be transferred to the Municipality of Maunabo. From the day the first stone was laid, the Municipality has interpreted the lighthouse as one of its most significant cultural, social and architectural components, said the Hon. Jorge L. Márquez Pérez, Maunabos mayor. I consider the Punta Tuna Lighthouse part of our heritage. As a result, I feel morally and historically obliged to assume its perpetual care.

Though the Fresnel lens remains in the lantern room, a modern beacon, powered by a set of solar panels, serves mariners today. The lighthouse grounds offer a spectacular view of the surrounding coastline.

For a larger map of Punta Tuna Lighthouse, click the lighthouse in the above map.

From Route 3 in Maunabo, turn east onto Route 760 and follow this winding road for 3.7 km (2.3 miles) to Point Tuna. Route 760 will first be Calle Principal, and then it will become Calle Dr Janer as you make a right, and then Calle E as you make another right. The lighthouse grounds are open between 9 a.m. and 4 p.m., Wednesday - Sunday (holidays excluded). For more information, the lighthouse can be reached at (787) 861-0301.

The lighthouse is owned by the the Municipality of Maunabo. Grounds open, tower closed.