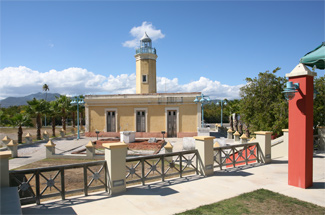 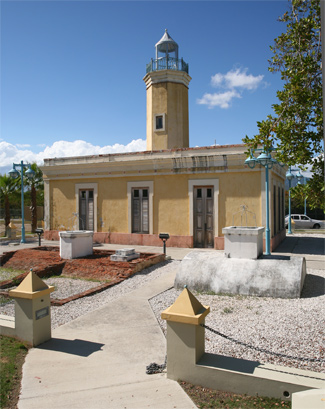 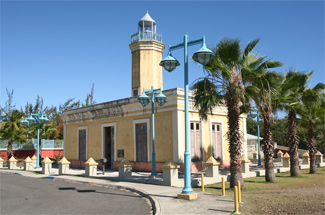 Construction of Punta de las Figuras Lighthouse was begun by the Spanish in 1892 and finished in 1893 at a cost of 18,300 pesos. The fifth-order light, which was displayed at a height of forty-seven feet above high water and was visible from a distance of twelve miles, served to guide vessels into the ports of Arroyo and Patillas and connected the more powerful coastal lights at Point Tuna and Caja de Muertos. The lighthouse structure consisted of an octagonal tower rising from the middle of a flat-roofed dwelling, painted dark gray with white trimmings. After the United States assumed control of the lighthouse following the Spanish-American War, the Lighthouse Board noted that the swamp north of the light-house was drained, a fence was made and fitted by the gate; strainers were fitted in the leaders, the broken glass in the windows was repaired, and the interior walls and walks were repaired with cement.

The brick and stone dwelling measured roughly 58 by 18 and the main entrance led into the vestibule of a five-room apartment, with a room set aside for the engineer and the keepers assistant. A kitchen with a Spanish stove was located in the southeast corner of the dwelling, and a brick cistern and well located nearby provided the necessary water supply.

The lighthouse was not simply utilitarian as the top of the dwelling was wrapped in a decorative high relief frieze featuring a pattern of alternating rectangles and circles. The frieze-cornice arrangement is repeated, though on a smaller scale and without the high relief, atop the tower. Genoa marble slabs were used as flooring, and the ceiling featured firewood beams. A cast-iron spiral stairway led to the lantern room, where a fifth-order Fresnel lens by Barbier, Benard, & Cie. was mounted atop a cast-iron pedestal.

A reinforced-concrete oil house was completed at the station in early 1914.

Lorenzo Castro-Gonzales was keeper of the lighthouse for at least fifteen years in the early 1900s. In 1920, fifty-three-year-old Lorenzo was living at the lighthouse with his wife, a daughter, and two young boarders. Keeper Castro-Gonzales must have kept the station in immaculate condition as he received the lighthouse efficiency flag in 1919, 1920, and 1921 for having the model station in the district. According to lighthouse regulations, the light station in each district attaining the highest general efficiency during a fiscal year shall be entitled to fly the efficiency flag during the succeeding fiscal year. The efficiency flag shall be the regulation Lighthouse Service flag, and shall never be displayed above or on the same staff as the national colors. The Lighthouse Service flag was a white, triangular-shaped pennant that had a red border and featured the silhouette of a blue lighthouse. By 1930, Keeper Gonzales had been transferred to Cabras Island Lighthouse.

The light at Point Figuras was relocated in 1938, and Point Figuras Lighthouse was boarded up and abandoned. During World War II, the structure was once again occupied and used as a lookout. Some years after the war, the land surrounding the lighthouse was leased to the Army, who retained control of it until 1963. After the Army relinquished control, the lighthouse was repeatedly vandalized, and by 1978 all the doors, windows, and large sections of the interior walls and tiles were missing. The lens and lantern were reportedly destroyed by vandals in 1969.

In 1978, the lighthouse was photographed for the Historic American Engineering Record, which contains the following colorful description of the structure and its environs.

Knowing its once dilapidated condition, one would be surprised to see the brightly painted and restored Point Figura Lighthouse today. In 2002-2003, the government beautifully rehabilitated the lighthouse at a cost of $2.3 million. A new black and white tile marble floor was installed, the Spanish stove was restored, and a new spiral staircase was put in place to provide access to the lantern room. The area just south of the lighthouse still features the original well and cistern. The Puerto Rico National Parks Company operates a beach resort called Punta Guilarte Arroyo adjacent to the lighthouse. The remains of a light formerly used to guide ships into Arroyo Harbor can be found on the beach near the lighthouse.

For a larger map of Punta de las Figuras (Point Figuras) Lighthouse, click the lighthouse in the above map.

From Route 3 near Arroyo, turn south on Camino Vecinal, and after 0.7 km (0.4 miles) make a quick right and a left to continue south on Camino Vecinal. Just before you reach the coast, turn left onto Calle Cangrejos and continue 1.1 km (0.7 miles) to the Punta de las Figuras Lighthouse, located near Punta Guilarte Vacation Center. The lighthouse is reportedly open daily between 9 a.m. and 3 p.m. For more information, call (787) 839-3565.

The lighthouse is owned by the Puerto Rico Department of Natural Resources. Grounds/tower open.