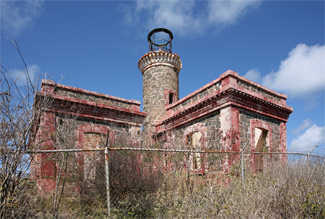 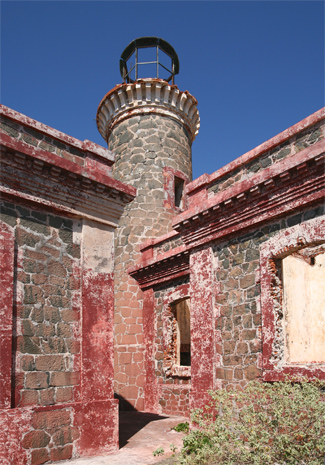 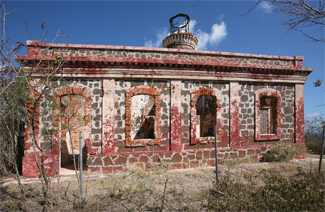 The Culebra archipelago consists of a collection of just over twenty rocks, cays, and islands, situated eighteen miles east of the main island of Puerto Rico and halfway to St. Thomas, U.S. Virgin Islands. Culebrita Island is the easternmost island in both the archipelago and all of Puerto Rico and was thus a natural spot for a lighthouse to mark the Virgin Passage, separating Puerto Rico and the Virgin Islands. Construction of Culebrita Lighthouse, which was begun on September 25, 1882 and completed on February 25, 1886, was a difficult undertaking due to the undeveloped state of the island. A wooden pier was first built for offloading supplies that were lightered to shore from the supply vessel, anchored offshore. Next, a road had to be hacked out of the island with picks and shovels to reach the construction site, situated at an elevation of 305 feet. Almost half of the laborers quit due to the backbreaking work required to transport supplies to the islands summit over the rugged road. Fearing he would lose his entire crew, the engineer in charge ordered a shipment of pack animals from his superiors in San Juan. Five donkeys arrived the next week and provided great relief to the workers.

When work on the stone edifice began, the laborers threatened to abandon their work if not supplied with shoes to protect their feet from the burning effect of the hydraulic lime used in the plaster. Shoes were soon provided for the men, but the donkeys hooves were showing signs of irritation. Having grown attached to the donkeys, the men would wash the animals hooves each night with some of their precious allotment of fresh water.

The plans for Culebrita Lighthouse called for a unique T-shaped stone structure with the thirty-seven-foot-tall tower being centered along the vertical portion of the T. The bottom portion of the T was an oil room and storeroom, and on the opposite side of the tower, a corridor led to a pair of identical keepers quarters, one on the left and one on the right. Each apartment consisted of three rooms measuring 10 x 12 and a kitchen/dining room measuring approximately 13 x 15.

The lantern room, accessed by a spiral stairway, housed a fourth-order lens in 1901, but by 1908 a third-and-a-half-order lens manufactured in France by Sautter, Lemonnier, & Cie had been installed. The focal plane of the light was 305 feet above high water. A door in the lantern room led outside to a cement gallery that was surrounded by a cast-iron balustrade.

At the end of the Spanish-American War, Culebrita Lighthouse and all others in Puerto Rico fell under control of the United States. The fourth-quarter edition of Commerce Reports for 1916 noted that several employees of the United States Bureau of Lighthouses had recently been commended for services rendered under circumstances which required the display of courage in the saving of lives or property. Most of the keepers mentioned had rescued individuals from disabled boats, but one keeper was recognized for preventing the spread of a fire near his light station. The first entry in the list of commended keepers was the following:

Julio L. Rengel, keeper, and Vincente Garcia, assistant keeper, of Culebrita Island Light Station, P.R., for the energetic manner in which they worked during the prevalence of a hurricane which passed over the island of Culebrita October 9 and 10, 1916, to keep the light burning. The keeper and the assistant keeper filled the gap in the lantern left by broken glass with planks and blankets and replaced the broken glass during the day so as to avoid any interruption to the service of the light.

The estimated velocity of the wind during the hurricane was 125 miles an hour.

In 1920, Keeper Simeon Martin was commended for rescuing two men whose boat was wrecked on the reefs near Culebrita Island Light Station. A strong earthquake was felt at the lighthouse on August 1, 1927 and caused the light apparatus to oscillate but no damage was done.

In 1959 the U.S. Coast Guard sealed up the lighthouse with concrete blocks and cement. The U.S. Navy started using the lighthouse as an observation post during the latter part of the 1960s and maintained a presence on the small island until 1975, when the lighthouse was destaffed for the final time. The Coast Guard still maintains a solar powered light in the lantern room, but obviously does not perform much maintenance on the structure as evidenced by the entire lack of glass in the lantern room.

Culebrita Lighthouse was placed on the National Register of Historical Monuments of the United States on October 22, 1981, but nothing is being done to preserve the deteriorating structure. Vandals and multiple hurricanes, such as Hugo in 1989 and Marilyn in 1995, have caused significant damage to the lighthouse. Doors, windows, and the cupola are missing, and part of the roof has collapsed.

The Culebra Foundation, founded in 1994, has formed a small museum on Culebra and is trying to spearhead a movement to save Culebrita Lighthouse, the only remaining Spanish-era structure in the Culebra archipelago. The lighthouse and the surrounding four acres of land were transferred from the General Services Administration to the Municipality of Culebra in 2002. According to the foundation, the local government appropriated over two million dollars for preserving the lighthouse, but disgracefully, the significant sum was mishandled and little has been done to save the historic structure. In 2015, Para la Naturaleza, a unit of the Conservation Trust of Puerto Rico, announced that it would be collaborating with the Municipality of Culebra to restore and preserve the lighthouse.

For a larger map of Culebrita Lighthouse, click the lighthouse in the above map.

Culebrita is easily reached by water taxi or kayak from Culebra, which in turn can be reached by plane from San Juan or by ferry from Fajardo.

The lighthouse is owned by the Municipality of Culebra. Grounds/tower open.


My trip to visit Culebrita Lighthouse was definitely a highlight of my trip to Puerto Rico. It started one morning at Isla Grande airport where a group of about eight of us was escorted from the terminal out on the tarmac to board a small prop plane. Four passengers were loaded into one side of the airplane, and the rest of us were led to the other side where the pilot noticed a liquid steadily dripping from the airplanes wing. This discovery caused enough concern to cause all of us to be taken back into the terminal, but not ten minutes later we were loaded onto the same plane with the same drip without any explanation. Feeling a bit uncomfortable, I finally asked the pilot if the liquid was fuel, and when he replied in the affirmative, I questioned if it was safe to fly in that condition. He, of course, answered yes, and I quickly reasoned that if he were willing to fly the plane and risk his life, it must not be too serious.

The aerial views between San Juan and Culebrita are some of the best I have ever experienced. The white beaches on the small islands off the northeast coast of Puerto Rico are surrounded by turquoise waters that make for an idyllic tropical vista, and on the return, we were treated to the high-rise-lined beaches of San Juan and the citys two historic forts. Once over Culebrita, we descended through a narrow valley, and shortly before reaching the runway, the pilot had to make a hard left to touch down on the runway. I had never seen an approach with a turn in it, and I dont think I was the only one, as the guy next to me suddenly reached forward and grabbed the seat in front of us just before touchdown.

I was picked up at the airport by the captain of the boat that was taking me to Culebrita - the same guy who I had spent three hours the night before trying to convince that I did indeed have a reservation for a trip on this day. I had to make two calls to his booking agent in New York to get it straightened out. Turns out the problem was that I had booked too far in advance, and he had forgotten about the reservation. I was told that nobody books more than one or two days in advance. To his credit, the captain ended up honoring my reservation and canceling a dental appointment on the main island, but the whole problem might have been averted had he confirmed my reservation when I called four days before the trip instead of telling me to call back the night before the trip.

It is a quick fifteen-minute boat ride out to Culebrita. Once on the island, I first hiked to the summit to visit the lighthouse, which turned out to be my favorite in Puerto Rico. Even though the roof of the lighthouse is missing along with most of the lantern room, the stonework, coloring, unique shape, and marble tiled floors make the structure very special. And then there are the views from the lighthouse  to the west is Culebra, to the east are the Virgin Islands, and to the north is Tortuga (Turtle) Beach, the prettiest beach I think I have ever seen.

After ample time at the lighthouse, I headed down for some swimming and lounging at beautiful Tortuga Beach followed by a couple of hours of snorkeling on the opposite side of the island before being picked up by the water taxi.