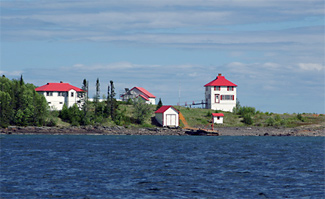 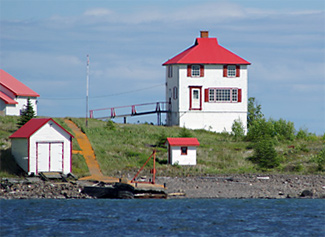 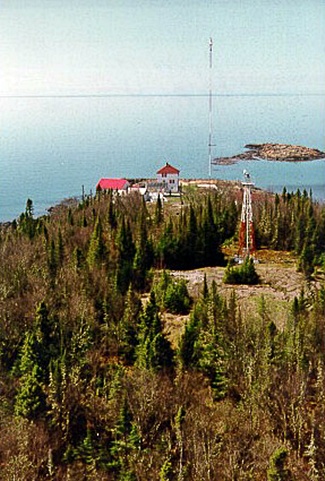 Lake Nipigon, the largest lake located entirely within the boundaries of the province of Ontario, drains into the Nipigon River and then into Nipigon Bay on the northern shore of Lake Superior. Lake Nipigon and the Nipigon River are the largest tributaries of Lake Superior. Nipigon Bay is protected by a string of islands, including St. Ignace Island, the second largest island in Lake Superior, Copper Island, Wilson Island, Vein (Salter) Island, Simpson Island, Fluor Island, and numerous smaller islands. While there are five ship channels leading into the bay from Lake Superior, only two are well-suited for large vessels: Nipigon Strait and Simpson Channel. The entrance to Nipigon Strait, used by vessels approaching from the west, is bounded by Fluor Island and Lamb Island, while the entrance to Simpson Channel, used by vessels approaching from the east, lies between Simpson Island and Battle Island.

The first lighthouse erected by the Canadian government on Lake Superior was placed on Talbot Island, just south of St. Ignace Island in 1867, and was known as St. Ignace Lighthouse. William Perry kept the light that first season, and at the close of navigation in November, he extinguished the light and started for one of the Hudsons Bay Company trading posts. Perry never reached his destination, and his body was found the following spring on the mainland shore of Nipigon Bay, about fourteen miles from the trading post.

To prevent the need for the keeper to leave the station, the government built a suitable dwelling on Talbot Island in 1869. Thomas Lamphier, the second keeper of the light, died in June 1871 and was replaced by Andrew Hynes. At the end of the 1872 shipping season, Keeper Hynes left his station and spent eighteen days traveling the fifty miles to Silver Islet. After he finally arrived, Hynes died from the effects of exposure. Having lost three keepers at the station in just five years, the Department of Marine decided to discontinue the light, as the fisheries in that region had not proved as valuable as anticipated.

In 1875, the Department of Marine contracted Joseph White to build lighthouses on Battle Island and Lamb Island to mark, respectively, the eastern and western entrances to Nipigon Bay. The lights were expected to be finished during the 1876 season, but due to unexpected difficulties encountered by the contractor, they were not placed in operation until 1877.

On August 7, 1876, Darius Smith, the Superintendent of Lights above Montreal, landed a lantern room at Lamb Island along with other supplies needed for the contractor to finish the lighthouse. The following description of Lamb Island Lighthouse appeared in the Department of Marines report for 1877:

The lighthouse on Lamb Island exhibits a fixed white catoptric light showing to all points seaward. It is elevated 90 feet above water mark, and should be seen in clear weather from a distance of 17 miles. The building is of wood, painted white, and consists of a square tower 46 feet high from base of structure to vane of lantern, with a keeper's dwelling attached. This lighthouse was put in operation on the 15th May last. Mr. John Michaelson was appointed keeper on the 7th September, 1876, at a salary of $300 per annum.

In 1877, Keeper Michaelson was praised for being an industrious man and for having much improved the place. Further details about his improvements were provided in 1878 by Darius Smith:

Arrived off Lamb Island, on the 27th July, at 2 a.m. This is a square wooden tower, with dwelling-house attached, and stands on the middle of the Island, 90 feet above the lake. The tower is 46 feet high from base to vane, and this light can be seen 20 miles. The lantern is constructed of iron, 8 feet in diameter, and has four circular lamps, No. 1, with 19 inch reflectors, Size of glass, 36 x 36 inches. It is a white fixed catoptric light.

The deck of the lantern leaks badly, and a new cover is required; the keeper cannot keep it tight.

John Michelson is the keeper; he has a family of ten. His station is in very good order. A boat-house has been built by the keeper, 29 feet long and 14 feet 6 inches, wide; it is a good building; it is not yet quite finished, as some more lumber is required for the back end of the building. The lumber used in its construction is that which was taken off the contractors hands by the Department. The keeper has also supplied some which he procured along the shore.

Due to continued leaks, the lighthouse was in a bad state of repair in 1896 and had to be practically rebuilt at a cost of $818.46. In 1909, a fourth-order French lens replaced the lighthouses original catoptric lighting apparatus.

On September 20, 1928, an air diaphone commenced operation in a building nearer the shore of Lamb Island with the following characteristic: two-and-a-half-second blast, three seconds of silence, two-and-a-half-second blast, fifty-two seconds of silence. In 1930, the characteristic of the light was changed from fixed white to a flash every twenty-five seconds.

Arthur J. Newman took charge of Lamb Island Lighthouse in 1937. Twelve years earlier, Arthur married Mabel Jenn, who came to Canada in 1921 at the age of seventeen as one of roughly 100,000 British Home Children brought in by Dr. Barnardo's Homes, a charity set up by Thomas Barnardo to help children. Excerpts of some of Mabel Newman's letters were printed in Ups and Downs,  the magazine of the Canadian Branch of Dr. Barnardo's Homes, which included the following in 1946:

For sixteen years we have lived on a lighthouse! This is a more important station here, so we have to stay wide-awake and keep twenty-four hour watch. We are one happy family, I'm glad to say. This work means we can all work together and never be apart. Some of our well-meaning friends call this a God-forsaken job, but we don't look on it as such. We feel the Presence of our Lord far more here than in the busy hustle and bustle of the City. Did he not walk upon the storm-tossed sea? We like to watch the storms on the lake, but at the same time we never forget to ask God's blessing on the sailors.

Fifty-eight-year-old Arthur Newman died of a heart attack at Lamb Island Lighthouse during a storm on November 28, 1951, when Arthur and Mabel were alone on the island. A small forestry department aircraft was able to land Arthur Newman, Jr. on the island the next day to take care of the light in place of his father. Mabel left the island in the aircraft, but the plane was too small to carry her husband's body and a tug had to be sent to retrieve the body. Arthur, Jr. looked after the light for the rest of the season, and a new keeper was brought in the next year.

A forty-foot-tall, square, skeletal tower replaced the original lighthouse in 1961, and today a white flash every five seconds is exhibited from a focal plane of 100 feet above Lake Superior. A new keeper's dwelling was also built on the island in 1961.

In 2015, Lamb Island Lighthouse was designated a heritage lighthouse under the Heritage Lighthouse Protection Act by Honourable Leona Aglukkaq, Minister of the Environment and Minister responsible for Parks Canada.

For a larger map of Lamb Island Lighthouse, click the lighthouse in the above map.