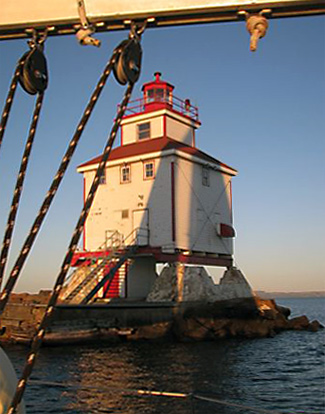 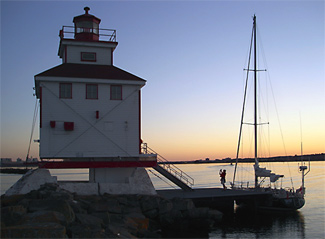 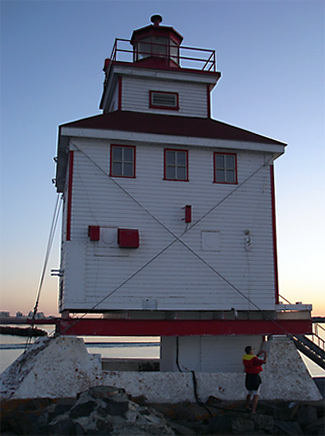 Situated on Thunder Bay Harbours breakwater, Thunder Bay Main Lighthouse is a waterfront focal point for tourists and residents alike. The square, two-storey dwelling, with a lantern room centered atop its hipped roof, was first activated in 1940 and is supported by steel beams that rest on four concrete pedestals. The lighthouses clapboard exterior is painted white, while the lantern room and various accents are painted fire-engine red. For protection from storm-tossed seas, each first-floor window was equipped with steel shutters.

The Lake Carriers Association described the newly completed lighthouse in its annual report for 1940:

A new lighthouse and fog signal was established on the north side of channel on south end of new Port Arthur breakwater. The station is white square wood, surmounted by red iron lantern. The light, at an elevation of 48 feet, shows a flashing white catoptric light, one flash every 7 ½ seconds.

The construction requirements specified in the original 1939 tender package called for all materials to be Canadian made, and if that werent possible, they should be products of the British Empire. Framing lumber was to be spruce or fir, boarding and rough flooring was to be spruce or red pine, all finished flooring was to be birch or maple, and the shingles were to be of cedar from either New Brunswick or British Columbia. The iron railing and lantern room were to be supplied and installed by the Department of Transport after the substructure was complete.

In early January, 1951, vandals pedaled their bicycles out to the breakwater over the frozen habour, smashed the half-inch-thick glass in a fourteen-inch porthole window, and then shimmied through the small opening to enter the lighthouse. Edward Ormsby, a local sub-agent for the Department of Transport, discovered the forced entry when he made a trip out to the lighthouse and suspected it must have been the work of boys given the size of the porthole window. An article in the Fort William Daily Times provided the following description of the destruction caused during the break-in: The damage includes 23 smashed window panes, damage to the wooden stairway, the lamps, the two diesel motors, paint spilled on the floor, [and] metal articles such as fire extinguishers put in a steel vice and mangled. Damage was estimated at over $200, and the Ontario Provincial Police was called in to investigate the matter.

On May 15, 1971, the fully loaded freighter Simcoe, owned by the Canada Steamship Line, plowed into the breakwater and reportedly moved the lighthouse three feet, severing the submarine cable that powered the light and causing damage that took four months to repair.

A temporary pole light was established at the western end of the breakwater on August 17, 1886, and in 1887 the main light from the Canadian Pacific Railway dock was moved across the ice and anchored atop a cribwork block on the breakwater to replace the pole light. These lights worked with a pair of range lights established at the mouth of the Kaministiquia River in 1873 to serve mariners at Fort William and Port Arthur.

The following description of the breakwater at Port Arthur and Fort William was published in 1905:

Port Arthur is rendered safe by breakwaters parallel to the shore, the entrance being through a gap marked by a fixed red light, 43 feet high, upon the northern portion of the breakwater. The channel is dredged, and 19 feet may be carried to the Canadian Northern Railway Companys elevator. The inner harbour at Port Arthur is therefore formed by two cribwork breakwaters extending in front of the wharfs on the water front of the town. The more northerly breakwater is 3,654 feet long, and has a general trend south of 25 degrees west from a point outside the elevator wharf at the north end of the town. The lighthouse is on this breakwater, and is situated at 31 feet from its south end, showing, as above stated, a fixed red light 43 feet high.

The breakwaters are sunk generally in 17 and 18 feet of water, and have a height of five feet six inches above low water. On the lake side the crib work is made vertical up to about low water line, and from there to the top it is finished with a slope one in one, strongly sheeted and the angles protected by boiler plates. The construction of this breakwater has converted what was formerly a dangerous and exposed roadstead into a safe and commodious harbour.

When the present breakwaters were built, they were placed several hundred metres farther offshore from where the original breakwaters stood in order to afford plenty of room for massive freighters to navigate in the harbour.

Thunder Bay Main Lighthouse remains active today, sending out a red flash every five seconds to mark the north side of the central opening in the breakwater. The structure is floodlit seasonally to make it more visible. If mariners wish to have the services of a fog signal to locate the gap in the breakwater, they can click their radio mike five times within a five-second window on channel 19 to activate a horn.

For a larger map of Thunder Bay Main Lighthouse, click the lighthouse in the above map.

This lighthouse is best seen by boat, though distant views are possible from the waterfront in Thunder Bay. Sail Superior offers harbour tours that pass by Thunder Bay Main Lighthouse.