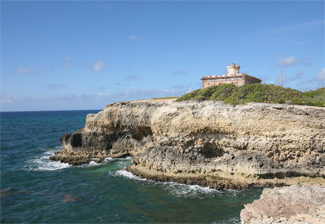 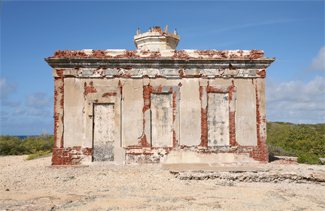 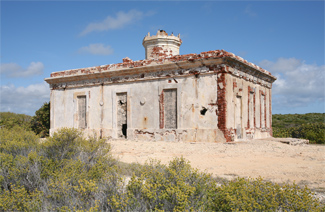 The Spanish commenced construction of Puerto Ferro Lighthouse in 1896 using essentially the same plans as the earlier Punta Mulas Lighthouse located on the opposite shore of Vieques Island, but the outbreak of the Spanish-American War interrupted the work. Just a few months after control of Puerto Rico passed to the United States, work resumed on Puerto Ferro Lighthouse with the U.S. government setting aside $4,000 for the purchase and installation of a light at Puerto Ferro. The lighthouse was activated for the first time in December 1899.

Puerto Ferro Lighthouse consists of an octagonal tower centered on the roof of a one-story dwelling, which measures 53 x 35 with the main entrance centered on the south side of the structure. The main door enters into a vestibule, which connects to the tower to the north, the keepers two bedrooms and a living room to the east, and an inspectors room, office, storage/oil room, and latrine to the west. The kitchen was located opposite the vestibule on the north side of the dwelling.

A spiral, cast-iron stairway provided access from the dwelling to a circular lantern room, which was surrounded by a cement gallery and a cast-iron balustrade. A third-order Fresnel lens in the lantern room was revolved by a clockwork mechanism attached to a 200-pound weight that was suspended in the stairways central column. The lights early signature was a white flash every five seconds, and the structure was painted white with gray trimmings.

Keeper Raimon Romero discovered a bottle with a message inside near Puerto Ferro Lighthouse on November 17, 1912. The message indicated that the bottle had been set adrift at a point in the Atlantic Ocean about 240 miles east of Cape Henry, Virginia on October 12, 1907. It was thus surmised that the bottle had made a circuit of the North Atlantic in just over five years.

In 1912, a request was made to purchase a half-acre parcel inland from Puerto Ferro Lighthouse for the establishment of a new watershed and cistern, as the water being collected from the roof of the lighthouse was being contaminated by sea spray due to the proximity of the lighthouse to the ocean.

In Reports of the Department of Commerce for 1913, it was recommended that $34,000 be spent to establish a lighthouse at Port Real. The following explanatory note accompanied the recommendation.

The lighthouse at Port Ferro, on the south coast of Vieques, or Crab Island, is one of the primary seacoast lights of the Porto Rican system. The light tower and keepers dwelling attached to it are built on top of a rocky promontory undermined for some time by the sea, and the whole structure, already dangerously cracked, is in danger of collapsing. It is urgent to rebuild a lighthouse at or near this point, as this is an important aid to the navigation from St. Thomas to Cuba and other West Indian Islands and the Caribbean Sea. A light in this vicinity is necessary for navigation, and it is proposed to dismantle the present Port Ferro Light Station and to erect a new light station at Port Real, about 3 miles westward where the aid will be more useful and on better ground than on its present location at Port Ferro, as Port Real is the most important and the best anchorage around Vieques Island.

This requests for funds was repeated for over a decade, but Puerto Ferro Lighthouse continued to operate until it was boarded up and abandoned in 1926. On May 2, 1922, two earthquake shocks were felt at the lighthouse. The second was somewhat stronger than the first and opened up cracks in two different places in the kitchen chimney. A more severe earthquake struck the station on March 19, 1925 at 4:50 a.m. This tremor caused some of the mercury used to float the lens to slosh out onto the lantern room floor, and the lens stopped revolving until the keepers were able to repair it the following morning. The quake enlarged existing cracks in the building and created new cracks in the roof of the dwelling.

Between 1941 and 1942, the U.S. Navy expropriated two-thirds of Vieques Island, including the area surrounding Puerto Ferro Lighthouse. Starting in 1948, the Navy began using a portion of the island for bombing exercises. Over 23,000 bombs, the majority of which contained explosives, were dropped on Vieques in 1998. Then on April 19, 1999, David Sanes, a civilian employee of the Navy, was killed while on duty at a military observation point when a bomb exploded just 30 feet from him and 1.5 miles from its intended target.

After this accidental death, local residents started practicing civil disobedience by setting up camps inside the bombing range. The protesters gained the support of several political activists, including Robert F. Kennedy, Jr. and Al Sharpton both of whom were imprisoned for trespassing on the Navys property on Vieques. During his prison term, Kennedys wife Mary gave birth to the couples sixth child, whom they named Aidan Caohman Vieques Kennedy.

On June 13, 2001, President George W. Bush announced that the Navy would suspend its bombing in 2003 and leave Vieques. The citizens of Vieques held a celebration on May 1, 2003, when the military ended its nearly sixty-year-long control of most of the island. The area around Puerto Ferro Lighthouse is now part of the Vieques National Wildlife Refuge. While a good portion of the refuge remains off-limits, the peninsula on which the lighthouse sits and a few spectacular beaches nearby are open to the public.

Today, Puerto Ferro Lighthouse is missing its lantern room and is in dire need of restoration. When the lighthouse was abandoned, an automated skeletal tower, shown in the black and white photograph above, was erected adjacent to the lighthouse. The tower supported a beacon that produced a white flash every four seconds, but eventually succumbed to corrosion and collapsed, leaving no navigational aid on the point.

Located on the central southern coast of Vieques Island. The lighthouse was formerly within the U.S. Navy's Camp Garcia, but is now part of the Vieques National Wildlife Refuge.
Latitude: 18.0962, Longitude: -65.4235

For a larger map of Puerto Ferro Lighthouse, click the lighthouse in the above map.

From the Vieques ferry landing in Isabella Segunda, travel south on Calle Morropo for 0.2 km (0.13 miles), and then keep right onto Calle San Jose. After two blocks, turn left onto Calle Munoz Rivera, and then after three more blocks bear right onto Calle Antonio G Mellado. After 0.4 km (0.25 miles), turn left onto Route 997 and continue south for about 5 km (3.1 miles). From this point, you will likely have to walk the last 2 km (1.3 miles) to Puerto Ferro Lighthouse as a gate typically blocks the road.


I had originally planned to take the ferry to Vieques, but when I was unable to secure a reservation, I decided to book a flight rather than face the lengthy ferry lines that accompany a long holiday weekend. With a duration of just eleven minutes, the flight from Ceiba to Vieques was the shortest I have ever taken and provided some fairly decent views. When I had tried to book a rental car on Vieques, I was laughed at as no company would rent a car for just one day during Holy Week. One kind man finally asked me what I wanted to do on the island and recommended that I instead hire a driver he knew to take us between our destinations. This turned out to be a good thing, as it was less expensive than a rental car, and the driver, who had been on the island for almost twenty years, used to run a company that offered tours of the islands famous biloluminescent Mosquito Bay and was very knowledgeable about the goings-on of the island.

Our first destination was Puerto Ferro Lighthouse, which I wanted to visit in the morning so we could finish the hike before it got too hot. A dirt road leads right to the lighthouse, but a gate forces you to walk the last mile or so to the lighthouse. My parents were along for this adventure, and they didnt find the walk too difficult. The area surrounding the lighthouse is beautiful, and there is a picturesque bay just east of the point where the lighthouse stands. The lighthouse has been sealed off to protect the interior, but some time ago holes were chiseled in a couple of the bricked-up doorways.

The interior isnt in the best condition, but the wooden beams supporting the brick roof are mostly intact as is the spiral stairway, though it is badly corroded. Climbing to the roof is definitely not recommended nor safe, but it does offer a nice view of the tower and surrounding coastline. While I was taking pictures inside the lighthouse, my dad spotted a collapsed iron tower - the one seen in the black and white photograph above to which was affixed a diamond-shaped daymark and a beacon to replace the functionality of the lighthouse. The ruins of the light can be found amongst the tangled remains of the tower.

On the north side of the lighthouse are two openings for a cistern, formerly used to hold the stations water supply. There is still water in the cistern today, covered with interesting flotsam. Just west of the lighthouse is this pole, which is topped by a light and was formerly connected to a power line. I assume it served as a navigational aid, but it isnt your typical Coast-Guard-approved structure.

After an hour or so at the lighthouse, it was time to make the return hike to meet our driver and proceed to Punta Mulas Lighthouse. We enjoyed our time on Vieques, which also included a great lunch at Taverna in Isabela Segunda and being chased by an iguana on my way up to check out the fort located on a hill above the city. On our trip back to the airport, the precocious daughter of our drivers friend treated us to an entertaining version of Cash Cab. Im ashamed to admit it, but we missed three questions and technically should have been kicked out before we arrived at the airport. In my defense, I havent studied the order of the planets since I was in the fourth grade and roughly the same age as our quiz giver.