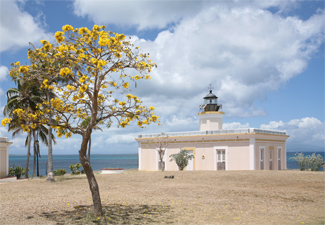 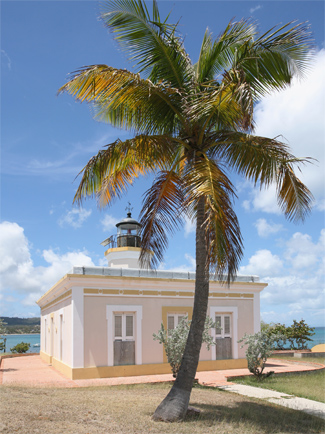 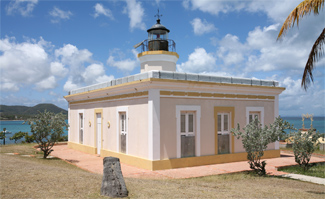 Isabella Segunda, the main town on the island of Vieques, was founded in 1843, the same year in which Queen Isabella II began ruling Spain. On a point just east of Isabella Segunda, the Spanish began construction of Punta Mulas Lighthouse in 1895 to mark the towns harbor and to assist vessels transiting the passage defined by Culebra Island to the north and Vieques Island to the south. Built at a cost of 14,500 pesos, the lighthouse commenced operation in 1896. The lighthouse, originally painted light blue with white trimmings, consists of an octagonal tower centered on the roof of a one-story dwelling, and this same basic plan was used to construct Puerto Ferro Lighthouse, located on the opposite shore of Vieques Island. The dwelling measures 53 x 35 with the main entrance centered on the south side of the structure. The main door entered into a vestibule, which connected to the tower to the north, the keepers two bedrooms and a living room to the east, and an engineers room, an office, storage/oil room, and latrine to the west. The kitchen was located opposite the vestibule on the north side of the dwelling.

A spiral, cast-iron stairway provided access from the dwelling to a circular lantern room, which was surrounded by a cement gallery and a cast-iron balustrade. A sixth-order Fresnel lens, manufactured in France by Barbier & Benard, was mounted atop a cast-iron pedestal in the lantern room at a height of sixty-eight feet above the surrounding water. The lights early signature was fixed-red, visible from a distance of eight miles.

When the United States took control of Puerto Rico in 1898, at the end of the Spanish-American War, the following information was published on Vieques Island, the largest of the Passage Islands lying between Puerto Rico and the Virgin Islands:

Crab Island, called also Vieques Island, six miles to the eastward of Puerto Rico, is the largest and most important of the Passage group, being 17 miles long by five broad. A ridge of small hills runs nearly its whole length along the middle of the island and rises to a moderate height at the southwest extremity of the island.

On the northern shore of Crab Island is Port Mula, at the mouth of a little stream. It contains about 1,000 inhabitants and is the residence of the governor, who is nominated by the captain general of Puerto Rico.

There is a lighthouse erected at Mula Point, from which a fixed red light is exhibited. There is comparatively no trade except fruits and fish in this archipelago, but undoubtedly these islands are capable of development and will pay a fair revenue after they have become a portion of the United States. Their natural beauty is unsurpassed, and over them the trade wind is continually blowing, giving them a warm delightful climate.

After the United States assumed control of the lighthouses of Puerto Rico in 1900, the following improvements were made at Punta Mulas Lighthouse: an outside water closet was erected, a stove was built in the kitchen, leaks around the tower and in the roof were repaired, and the walk in front of the lighthouse was cemented. An oil house, for storing kerosene, was built near the lighthouse in 1913 at a cost of $371.

Just a head keeper was assigned to Punta Mulas Lighthouse, as an assistant was not required to help with the stations fixed, sixth-order lens. Cayetano Valie was in charge of the station from 1930 to 1932, and in 1931, he was commended for rescuing two men whose lives were imperiled off the north coast of Vieques near the lighthouse.

Punta Mulas Lighthouse was remodeled in the early 1940s. At that time, the brick roof was replaced by one built of reinforced concrete. The storage/oil room was converted into a pantry and dining room, the vestibule became the living room, the office became the storeroom, and the former living room was made into an office. More changes were made in 1944, when the new pantry/dining room was made into a power plant and battery room, the storeroom was converted into a modern bathroom, and a portion of the office was remodeled to serve as a storeroom.

The lighthouse was automated and left unattended starting in 1949. However, a caretaker started living in the dwelling in the 1960s, which prevented the structure from falling into disrepair.

For a larger map of Punta Mulas Lighthouse, click the lighthouse in the above map.

From the ferry landing in Isabel Segunda on Vieques, turn left onto Calle Morropo, and after 0.3 km (0.2 miles), you will find Punta Mulas Lighthouse on your left. The lighthouse formerly housed a small museum focusing on Vieques and its maritime history. For more information, the lighthouse can be reached at (787) 741-5000.

The lighthouse is owned by the U.S. Coast Guard. Grounds/dwelling open.


A plaque on the lighthouse reads:

The Punta Mulas Lighthouse, a National Historic Monument, constructed in the year 1896 during the Spanish rule. Reconstructed under the administration of the Honorable Manuela Santiago Collazo, Mayor of Vieques, in the year 1992

It is obvious that the lighthouse was beautifully and meticulously restored as the decorative ironwork now mounted above the cistern is missing in the black and white photograph above. I knew the lighthouse would be closed during my visit in 2009 due to water damage, but I was disappointed to find that even the grounds were not open. I know I am biased, but I thought the lighthouse was the most beautiful spot in town, and certainly worthy of upkeep as it could host numerous public and private events.

Punta Mulas Lighthouse is still in a lot better shape than when it appeared in the 1986 movie Heartbreak Ridge. In this film, Clint Eastwood leads a ragtag platoon that he has whipped into shape on a reconnaissance mission on the island of "Grenada," which is played by Vieques. Eastwood's marines first rescue some Americans holed up at St. George's University and then have to take refuge in the abandoned Punta Mulas Lighthouse when they encounter a tank flanked my enemy fighters. You can clearly see the ferry landing and pier in the background in Isabella Segunda as a soldier climbs to the top of the lighthouse to repair a phone line so an air strike can be called in. After a helicopter destroys the tank, the men advance through the town and take the hilltop fort, which is also in dramatically better condition now then when the movie was shot.