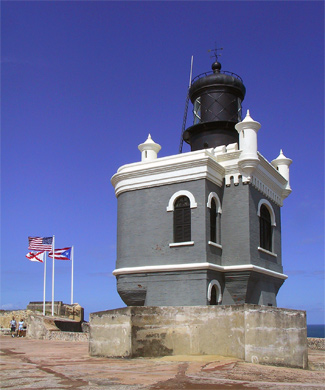 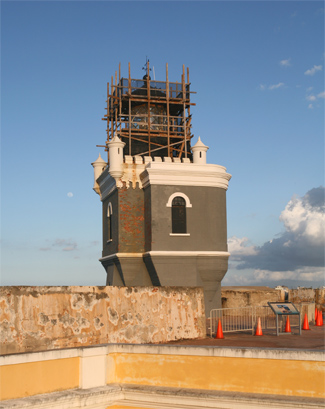 Work on Castillo Felipe del Morro, the fort on the northwest corner of the Islet of San Juan, began in the 1500s, but the structure was modified over the following 400 years to keep pace with new military technologies. Originally six feet thick, the forts outer walls had grown to their current thickness of eighteen feet by the end of the 1700s. The fort, commonly known as El Morro, has six levels and rises to a height of 145 above the surrounding water. The dome-covered sentry boxes found on many angles of the fort are known as garitas and have become a symbol of Puerto Rico.

Multiple lighthouses have served to mark the entrance to Puerto San Juan, one of the most important ports in the Spanish Empire. The first Puerto San Juan Lighthouse, and the first in all of Puerto Rico, entered service on January 1, 1846. Built atop the forts Austria Bastion, the bastion closest to the bays entrance, the lighthouse exhibited a light using five parabolic reflectors.

In 1876, the lighthouse was moved to Ochoa Bastion, the bastion closest to the sea, where it could be better seen by vessels approaching the harbor from the northeast. This new lighthouse featured an octagonal brick base that supported an octagonal cast-iron tower, painted gray and white. The lighthouses base was roughly ten-feet-tall and the tower approximately twenty feet tall, giving the light a focal plane of 171 feet above high water.

The cast-iron tower was rendered unserviceable during the Battle of San Juan, part of the Spanish-American War, which occurred in May 1898 when Admiral Sampson arrived with a fleet of twelve ships and briefly bombarded the city. The Americans gained control of Puerto Rico after the Treaty of Paris was ratified on December 10, 1898. Ensign W.R. Gherardi of the U.S. Navy was put in charge of Puerto Rico lighthouses on January 24, 1899, and he immediately began work on an octagonal tower, built of reinforced concrete, to replace the cast-iron one. The light from El Morro Lighthouse began burning again on March 22, 1899.

By 1905, the concrete tower developed a serious crack around the top of the tower, and it was torn down and replaced with the present three-story tower in 1908. The Lighthouse Board adopted a Spanish-influenced design for this brick tower, the top of which is surrounded by a crenellated parapet with an ornamental guardhouse at each corner, similar to those seen on fort. A third-order Fresnel lens, manufactured in France by Sautter, Lemonnier, & Cie and equipped with eight flash panels, was installed in the towers helical bar lantern room. The lens is somewhat unique in that it does not have prisms above or below the central drum. A 200-pound weight, suspended in the central column of the towers cast-iron spiral staircase, powered a clockwork mechanism that controlled the revolution of the lens. An electrical motor replaced this drive mechanism in 1932. The total cost for the new lighthouse was $3,961.47.

In 1920, a single-story dwelling, measuring fifty-two by twenty-four feet, was built for the lighthouses head keeper and assistant keeper. The outside of the dwelling , which cost $4,813, was covered with stucco on metal lath.

The present El Morro Lighthouse was originally painted gray, but by 1937 it had been painted a cream color with brown trimmings. The light was automated in 1962, and the keeper positions were discontinued.

In preparation for the quincentennial celebration of the arrival of Christopher Columbus in the New World, parking lots and paved roads surrounding El Morro were removed, and the lighthouse was repaired and restored to its original appearance by the National Park Service.

For a larger map of Puerto San Juan (El Morro) Lighthouse, click the lighthouse in the above map.

From the international airport, take Route 26 west for 4.8 km (3 miles) until it ends, and then take the bridge north to reach Old San Juan. After the bridge, you will be on Avenida de la Constitucion and you will quickly make a slight right as the road becomes Avenida Luis Munoz Rivera. Follow Munoa River for 2.7 km (1.7 miles) to Fort San Cristóbal. There is a small parking lot at this San Juan National Historic Site from which it is a walk of just over a mile to reach Fort San Felipe del Morro, where the lighthouse is located. You can try to park closer to El Morro, but your walk will still be at least ¼ mile.


During my visit to Puerto Rico in 2009, the lantern room of El Morro Lighthouse was undergoing restoration so the top of the structure was surrounded by scaffolding. The work had commenced roughly a year earlier, but lack of funds had delayed completion of the project. I had read on the National Park Service website about Lighthouse Tours that were offered at the fort, so I contacted them to find out when they were offered. That was when I learned that the lighthouse was being worked on and that public tours were not currently being offered.

After talking about the lighthouse for a while, somehow the chance of getting a peek inside came up, and we set a date and time for us to meet a ranger at the fort. I thought we would have the opportunity of just seeing inside the base of the lighthouse, but we were soon climbing the spiral staircase to the lantern room, where we had the chance to see the Fresnel lens, with its six bulls-eye panels and two plywood panels. Our tour wasnt quite through yet, as the park ranger received permission from a welder for us to climb atop the scaffolding, and soon we were at eye level with the directional indicator atop the lantern room enjoying an amazing aerial view of the fort and practically all of Old San Juan.

At some point during the tour, I asked the ranger where the keeper of the lighthouse lived. I suspected he lived in the fort, but the ranger said he resided in a bright red dwelling that she pointed out on the square just past the grassy expanse on the landward side of the fort.

While I was disappointed that the lighthouse was covered by scaffolding, we were treated to an informative, VIP-like tour that we will not soon forget and for which we were very appreciative.