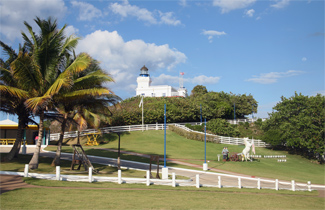 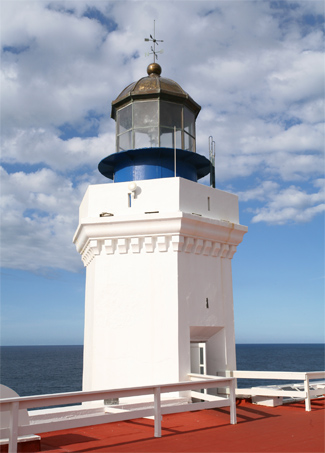 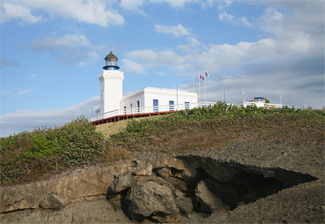 During the nineteenth century, Spain developed Puerto Rico as a plantation to grow such export crops as sugar, tobacco, and coffee. This trade kept the port at Arecibo busy, but between 1851 and 1858 around fifteen ships grounded or sank at the port due to a lack of navigational aids. In 1898, Spain finally completed a lighthouse atop Punta Morrillo on the eastern side of Puerto Arecibo, but just a few months later it fell into the hands of the United States, which gained control of the territory following the Spanish-American War. The plans for the lighthouse called for a forty-foot-tall, hexagonal tower attached midway along the long side of a rectangular, one-story, flat-roofed dwelling measuring 84 x 40. The entrance to the dwelling was on the south side, directly opposite the tower, and led into a vestibule. On the left and right side of the vestibule were doors that led into identical five-room apartments for the keepers. The five rooms consisted of two bedrooms, a kitchen/dining room, a bathroom, and a living room. Walking straight through the vestibule, one would find two rooms just before the door that led to the tower. On the left was a storage and cleaning room, while an engineering room was on the right. Each of the rooms in the dwelling was provided with a single, double-pane casement, except for the corner rooms, which had two windows. A basement below the tower served as an oil room, and a nearby cistern was used to hold water collected from the roof of the dwelling.

Halfway up the tower a window is located on the north face, and opposite this, a door provides access to the roof of the dwelling. A cast-iron and copper lantern room is perched atop the tower with its base surrounded by a cement gallery. A third-order Fresnel lens fabricated in France by Barbier & Benard was used to produce a fixed white light at a height of 120 feet above high water. Situated roughly thirty-four miles west of Puerto San Juan Lighthouse and twenty-eight miles east of Punta Borinquen Lighthouse, Arecibo Lighthouse served as both a coastal and harbor light.

The lighthouse, constructed in 1897-1898 using brick, stone, and rubble masonry, was originally painted red with lead-gray trimmings. Wooden floors were installed in the keepers quarters, while white and gray Genoa marble slabs were employed as flooring elsewhere in the lighthouse.

Arecibo Lighthouse was minded by a head keeper and an assistant keeper. Manuel P. Castillo was appointed assistant keeper in 1905 and a year later rose to head keeper, a position he held until 1913. In 1912, Keeper Castillo was awarded an efficiency pennant for having the model station in the district. A reinforced-concrete oil house was completed at the station on January 6, 1914.

The Lighthouse Service Bulletin described the following change to the station made in 1926:

As it was found desirable to increase the intensity and improve the characteristic of the light at Arecibo Light Station, on the northwestern coast of Porto Rico, by changing it from a fixed white oil vapor light to a flashing light, it was decided to use electricity in the lens for the additional reason that the dwelling could be lighted electrically from the same plant, thus improving living conditions therein and reducing fire risk and attendance.

This isolated light station is located on a wind-swept point, and it had been reported that the station had never been inspected when the weather was found to be calm. For this reason it was thought that a wind-driven electric generator, such as are now commercially available, could be tried out here, in the interests of economy, as it was estimated that the amount of power available might be greater than needed.

The plan covered the installation of a suitable wind-driven electric generator, and the introduction of electricity for lighting purposes in the dwelling, and an experimental test of a set of electric incandescent lamps suitable for the lens. A preliminary test was carried out at the San Juan Lighthouse Depot with favorable results.

The plant was installed at the station in September, 1926, and passed through various periods of success and failures, with the result that a new improved type of propeller was installed on the tower, another 16-cell battery was connected to the original battery, thus doubling the capacity of the plant, a new reverse current cutout was installed, and the generator and plant overhauled. It was then placed in commission again, and has operated satisfactorily for about four months. It will evidently require thorough test over a considerable period to prove its value.

In 1959, the keepers quarters were remodeled to accommodate modern bathroom facilities, and a reinforced-concrete roof replaced the original brick roof.

After the light was automated in 1964, the unmanned structure fell victim to decay and vandalism. Over the eight-year period between 1969 and 1977, the lighthouse was seriously vandalized sixteen times. The Fresnel lens was damaged in 1975 and destroyed in 1977.

When a survey of Arecibo Lighthouse was conducted in 1977, some of the marble slabs were missing in the floor, all the windows and doors were gone along with the lantern room, and chunks of brick and mortar had been torn from the walls. The City of Arecibo initiated an ambitious restoration of the lighthouse in 2001, and a year later a new lantern had been installed and the entire structure thoroughly rehabilitated. The lighthouse, which anchors a historical park that includes an Indian village, a zoo, an aquarium, and a playground, is now home to a small museum showcasing marine artifacts, the history of the lighthouse, and the Spanish-American War.

For a larger map of Arecibo (Punta Morrillo) Lighthouse, click the lighthouse in the above map.

The lighthouse is owned by the U.S. Coast Guard. Grounds open, dwelling is a museum.


To gain access to Arecibo Lighthouse, you must pay admission to the Arecibo Lighthouse & Historic Park, which in 2009 cost $10. The price may be a bit steep, but there are some fairly interesting kid-oriented things to see besides the lighthouse, which I must disappointingly say is mainly used as office space, though the tiled floor and spiral stairway are in great shape, and the view from the lighthouse roof is outstanding. Some of the other attractions included with the lighthouse are Columbus' three ships, a pirate ship, a pirate's cave/aquarium, a mini zoo, and a Taino village.