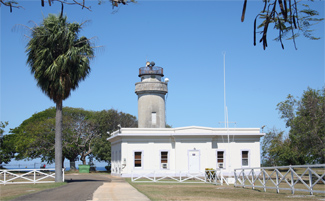 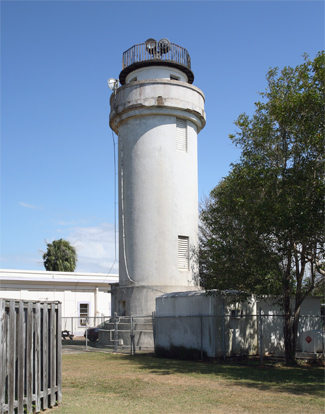 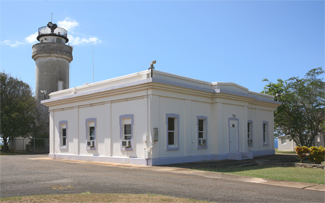 Puerto Ricans often call the main island of their self-governing U.S. territory Borinquen, which is derived from the islands indigenous Taíno name of Borikén. On September 15, 1889, the Government of Spain, which then controlled the island, activated the newly completed lighthouse on Punta Borinquen that had cost 30,870 pesos and was located sixty-five miles west of San Juan. The structure consisted of a thirteen-room, one-story dwelling, designed to house two keepers, that was centered around an octagonal tower. Both the tower and dwelling were built with stone and brick and were painted red with white trim. A bracketed cornice, built in a Moorish style that contrasted sharply with the structures otherwise simple neo-classic lines, supported the walkway that encircled the lantern room. A fourth-order lens installed in the lantern room had a focal plane of sixty-five feet above the surrounding sea. A weight suspended in the tower powered a clockwork mechanism that revolved the lens to produce a distinctive pattern of alternating red and white flashes separated by thirty seconds.

To supply the light, landings could be made near the station but only in the best of conditions, as it was an open roadstead and a nearly constant and heavy swell produced by the tradewinds pounded the shore. Otherwise, supplies had to be landed at Aguadilla and then transported over a five-mile-long tortuous, winding, and rocky trail to get to the station.

In the Reports of the Department of Commerce and Labor for 1911, $75,000 was requested for the removal of and rebuilding of the light station and dwelling at Point Borinquen. It was noted that the present light was improperly located at the foot of a 230-foot bluff, which obscured a view of the light from the northeast. In addition, the view from the south, towards the harbor of Aguadilla, was obstructed by plantations of high trees. With the opening of the Panama Canal in 1914, Point Borinquen Lighthouse would be the landfall and most important aid to navigation on the route from Europe to Panama, and hence a new light was sorely needed. At the time, Point Borinquen Lighthouse was described as being in a bad state of repair, the top part being considered unsafe and the foundation insecure.

After annual funding requests, an act of Congress in June 1917 provided $85,000 for the new Point Borinquen Lighthouse, but before any work had commenced, a 7.5-magnitude earthquake struck Puerto Rico at 10:14 a.m. on October 11, 1918. Centered about ten miles off the northwest coast of the island, the quake triggered a tsunami that inundated the nearby coastline to a depth of nearly twenty feet. Of the 116 people killed in the earthquake, forty were victims of the tsunami. Aguadilla and Mayaguez were the communities hardest hit, and property damage totaled $4 million.

Due to its low-lying position on the shore, Point Borinquen Lighthouse, which was already threatened by erosion, was battered by the giant wave as it spread inland. The structure, however, received most of its damage from the earthquake. The tower was shattered by the shock and likely would have fallen if not for the support of the iron stairway. Cracks appeared in the main walls of the lighthouse and many more developed after a strong aftershock on October 24. It was then necessary to abandon the lighthouse and display the light from a temporary wooden structure until the new Point Borinquen Lighthouse could be constructed.

Keeper Fancisco Cavallieri was living at the lighthouse at the time of the earthquake with his wife and three children. According to a report by his great-granddaughter Ileana Fajardo, Keeper Cavallieris wife had a sense that something was not right just minutes before the tremor. She noticed the air suddenly grew tight, the birds went silent, and the familys dogs began to bark wildly and ran out of the house. When Francisco ignored her pleas to leave the lighthouse, she picked up the kids and ran inland. Keeper Cavallieri soon followed his wife, and just moments later the tidal wave engulfed the lighthouse.

One of the stations two keepers was in the tower at the time of the earthquake, and he immediately started down the stairs, but not before noticing that the water along the nearby shore had started to recede. The keeper later measured the height of the flood produced by the tsunami to be around fifteen feet near the lighthouse.

By July 1919, plans for the new station were complete, a third-order lantern and the metalwork for the station were being fabricated, and construction bids were about to be solicited. The replacement lighthouse was constructed in 1920 atop a 230-foot bluff approximately one mile northeast of the old site. This time the tower was constructed of reinforced concrete and was detached from the nearby dwelling. The following description of the new lighthouse was published by the Lighthouse Service:

The tower is of reinforced concrete, 15 feet 2 inches in diameter, strongly proportioned, resting on a concrete block 25 feet square and 6 feet deep, the top of the block being that of the grade line, which is 233 feet above water. The tower supports a concrete watch room and gallery and a third-order helical bar lantern, the focal plane of which is 60 feet above the grade line and 293 feet above the water. The illuminating apparatus consists of a third-order [12-panel] flashing lens and 55 millimeter type A IOV lamp, the lens is arranged to show a group of four flashes every 30 seconds of 32,000 candlepower. The light is visible 24 miles. There are four reinforced concrete landings within the tower between the first and lantern floors, and the stairs are of cast iron. The kerosene for the lamp is stored in two cylindrical tanks located in vaults beneath the pavement at the foot of the tower and is drawn up to the watch room by an automatic measuring pump located therein. A lightning rod attached to the lantern-gallery floor runs down one side of the tower and is well grounded. The metal clockweight tube is also well grounded in a similar manner.

The dwelling is built of reinforced concrete. It is a one-story structure, 39 feet by 6 inches by 56 feet 4 inches in plan, with a clear height inside of 15 feet. This building has quarters for two keepers. A hall runs through the center of the dwelling, and there are five rooms on each side of it, one of which is a combined storeroom for the keepers. The dwelling lies 50 feet east of the tower, and is provided with concrete walks leading to the tower, outbuildings, and roadway. A four-compartment rain-water cistern, 5 feet wide and 5 feet deep, extends for the full length of the house on the west side beneath the sidewalk which surrounds the house. The work was carried out under two contracts, one for the metal work and the other for the erection of the buildings. The work in the shop started in October, 1918, and was completed at the site in August, 1920 [at a cost of $70.492.87].

A fence of concrete posts and barbed wire enclosed the two-acre station. The lighthouse was placed in operation on August 31, 1920. As the lens used in the original Punta Borinquen Lighthouse was destroyed in the earthquake, a third-order lens was ordered from the Macbeth Company of New York for use in the new tower. This lens floated in a pool of mercury to facilitate its rotation. In 1947, the lantern room was removed, and a thirty-six-inch, double-headed Crouse-Hinds beacon, designed to aid both sea and air traffic, replaced the Fresnel lens.

In 1924, a right-of-way for a road to the new station was purchased, and a roadway, four meters wide and 2,000 feet long, was constructed by hired labor. The road brought the total amount expended on the new lighthouse to $84,403.71, just a few hundred dollars short of the original appropriation.

Earthquakes continued to affect Point Borinquen Lighthouse even in its new location. On May 23, 1922, a severe earthquake broke the mantle being used in the incandescent-oil-vapor lamp. On August 18, 1925, an earthquake extinguished the light and caused some of the mercury used to revolve the lens to slosh out onto the lantern room floor. With quick action, the keepers were able to have the light back in operation in just twelve minutes. An earthquake on June 14, 1927 broke the lamps mantle, but the light was promptly put back in operation.

Edgerly L. Brewer joined the Coast Guard during World War II, and for the first three weeks of July 1943, he was in charge of eight men who resided in half of the dwelling at Point Borinquen and were tasked with manning a lookout tower and helping with the lighthouse. A day after arriving at the station, Brewer wrote a letter to his wife describing the station:

We have been cleaning up our five of the ten rooms in the house connected with the lighthouse. It is a one-story concrete building with a hall running through the building with five rooms on either side. The keeper [Joe Velez] and his family have half the building and we have the other half. The ceilings are 14 feet high and so its pretty cool. The keepers step-mother is here and does she ever like her cigars.

In our galley we have a Servel Electrolux (refrigerator) that has been here just about two weeks and we have just an old three-burner kerosene stove but are supposed to get a new electric one.

Keeper Velez was kind to Edgerley during his short stay, giving him fresh fruit and inviting him to eat some pea soup made of peas, beans, okra, peepers, rice, and ox tongue.

Jeff Bryant served as officer-in-charge of Punta Borinquen Lighthouse in 1977, and when he left in December of that year, responsibility for turning the light on and off was transferred to the nearby air station. The Coast Guard had tried to automate the lighthouse but the relays would not take the load, so manual intervention was still needed. Shortly after Jeff Bryant first arrived at Punta Borinquen he reported for duty one morning after being out drinking the night before. His commanding officer promptly gave him a shovel and rake and put him to work spreading gravel in the driveway under the hot sun saying, If youre going to stay out with the owls all night, be prepared to soar with the eagles in the morning.

The lighthouse is still controlled by Air Station Borinquen, but the dwelling is used as guest housing and the beacon is now automated.

Located at the top of the bluffs, near the northwest corner of the Rafael Hernandez Airport in Aguadilla.
Latitude: 18.4972, Longitude: -67.1488

For a larger map of Punta Borinquen Lighthouse, click the lighthouse in the above map.

From Route 2 in Aguadilla, go north on Route 107 (Calle San Rafael) for 4.1 km (2.6 miles). From this point, continue straight onto Avenida Borinquen for 2.1 km (1.3 miles), and then turn left onto a short road that leads to Punta Borinquen Lighthouse.

The lighthouse is owned by the U.S. Coast Guard. Grounds/tower closed.


As the dwelling at Punta Borinquen Lighthouse consists of two two-bedroom cottages that are used as guest housing for the nearby USCG Air Station Borinquen, the grounds are not accessible to visitors. You can get a decent view from the street near the lighthouse, but I also asked permission of the adjacent Punta Borinquen Golf Club to walk to the green of Hole 10 to get this view of the lighthouse.