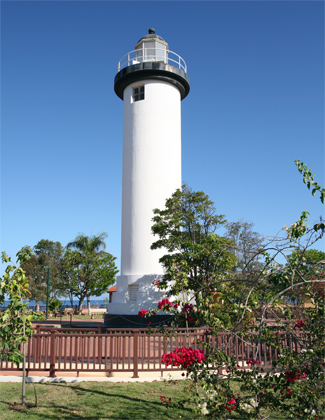 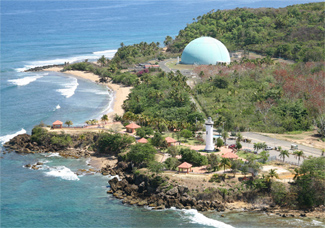 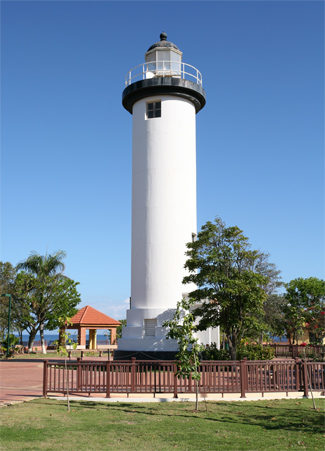 Built by the Spanish at a cost of 12,361 pesos, the first lighthouse on Punta Higuero was activated on January 13, 1893 to help guide mariners to Mayaquez Bay and through Mona Passage, which separates Puerto Rico from Mona Island. The towers lantern room originally housed a sixth-order Fresnel lens, which displayed a light at a focal plane of sixty-nine feet. An oil lamp was used as the first light source, but this was upgraded to a more powerful oil-vapor lamp in 1913. The U.S Lighthouse Service, which took control of Puerto Ricos lighthouses in 1900, built a detached, fireproof oil house at Punta Higuero in 1914 to store the volatile kerosene. Also in 1914, Jose Prieto, keeper of the lighthouse, was awarded the lighthouse efficiency pennant for having the model station in the district. The original lighthouse consisted of a one-story, stone and brick dwelling, built around a thirty-two-foot-tall octagonal brick tower. A Historic American Engineering Record contained the following description of the old lighthouse.

Its Mediterranean appearance came from an elaborate combination of exposed and indented brick work in the faces  around doors and windows  and corners. The castle look was further emphasized by reddish stucco imitating stone-work on all facades and the very elaborate exposed brick cornice topped by a parapet built in lace-like brick-work.

Punta Higuero Lighthouse was severely damaged by an earthquake that struck the area at 10:20 a.m. on October 11, 1918, but it was not affected by the tsunami associated with the quake due to its bluff-top location. The nearby lighthouse at Punta Borinquen was rendered unusable by the double-blow of the earthquake and tsunami.

An inspection of Punta Higuero Lighthouse following the tremor and several aftershocks found two serious cracks in the tower that extended clear through the brickwork and were located two and eight feet above the roof of the dwelling. Other cracks were found in the arches above the windows and doors in the exterior walls, and a great deal of plaster had fallen from the walls. The dwelling was vacated, not being considered safe for occupancy by the keepers, and $30,000 was requested to construct a replacement lighthouse out of reinforced concrete. A reinforced concrete yoke was placed around the tower for support until a new structure was finished.

Congress appropriated $24,000 in July 1919 for rebuilding the lighthouse. As bids for the project exceeded this amount, workers in the lighthouse district and hired labor were used. The Annual Report of the Commissioner of Lighthouses for 1922, gives the following description of the new station.

The tower is of reinforced concrete and consists of a cylindrical shaft 12 feet in diameter, with walls 1 foot thick, having a stepped base and supported on a square reinforced foundation 3 feet thick. A spiral stairway of precast concrete steps extends from base to top, the inner ends of the steps being supported by a hollow concrete column. A 7-foot helical bar lantern will eventually surmount the tower and contain the lens apparatus removed from the old station, but for present the old lantern is in use. The focal plane of the light is 55 feet above the ground, and 93 feet above high water.

The dwelling is a frame structure covered with asbestos shingles on the sides and roof. It contains a double set of quarters of four rooms each, with porches at each end. The dwelling is 63 feet long and 26 feet wide over all.

While waiting for the new lighthouse to be completed, several more earthquakes shook the station and rattled the nerves of its keepers and their families. On August 22, 1919, an earthquake lasting four-and-a-half minutes struck the area, breaking a mantle in the lighthouses lamp and temporarily extinguishing the light. The keeper of the lighthouse reported two more earthquakes in 1920:

January 27, 1920
I have the honor to inform you that yesterday at 5:10, 6:50, and 8:08 p.m., three earthquakes were felt, lasting 4, 6, and 7, seconds respectively, breaking the mantles in each case. The last tremor damaged the vaporizer and connecting tubes, and it was found necessary to replace them. The light did not fail because we immediately installed the spare outfit.

February 11, 1920.
An earthquake that lasted from 11 to 12 seconds was felt here yesterday. The mantle was broken, and some plaster fell off the building. At 9:05 p.m., it was found necessary to put out the light to change the vaporizer for it seemed as if the nozzle has been affected by the pieces of the broken mantle. It took 42 minutes to effect the change.

Rufino Flores Graniel was in charge of the lighthouse for most of the 1920s, and he often responded to the needs of people in distress near the station. On August 9, 1925, he tended to four people who arrived at the station after having been adrift for four days. Three months later, Keeper Graniel rendered assistance to a man who injured his knee while working on the railroad track that passed near the lighthouse.

On July 24, 1926, the eye of a powerful hurricane passed over the southwest portion of Puerto Rico, causing rivers to flood and drown about twenty-five people. Keeper Graniel provided shelter for four families, twenty-four persons in all, including fifteen children, whose homes were destroyed by the hurricane.

The dwelling at Punta Higuero suffered fire damage after the light was automated in 1933 and was later razed. Punta Higuero Lighthouse now stands alone in beautiful El Faro Park, a popular spot for surfing and whale watching.

For a larger map of Punta Higuero (Point Jiquero, Rincon) Lighthouse, click the lighthouse in the above map.


The blue dome just north of the lighthouse is what remains of a nuclear reactor that was built between 1960 and 1964 by the Atomic Energy Commission and the Puerto Rican government. The objective of the reactor was to assess the economic and technical feasibility of the integral boiling superheating concept, wherein water was boiled in the center of the reactor and the resulting steam used to drive a turbine generator. Technical difficulties led to the decommissioning of the reactor in 1970.