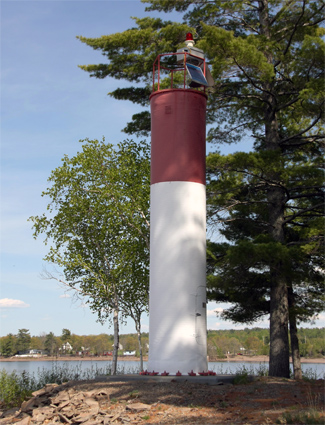 Charles Macpherson constructed wooden towers, each of which measured sixteen feet from base to the vane on the lantern room, at Fanjoys Point and Robertson Point, and the lights were placed into operation on October 1, 1873. It wasnt uncommon for landowners to have points named after them or for landowners to be placed in charge of lighthouses built on their land, and such was the case for the lights on Grand Lake, as John Robertson and William Fanjoy were appointed keepers of the two lake lights established in 1873. (Note that early spellings of the names were Robertson's Point and Fanjoy's Point, which more clearly captured the fact that the points were named after people.)

In 1895, Keeper Charles Mott cleaned up the land around the lighthouse and cut down trees that were obscuring the light. Fanjoys Point Light was improved in 1905 when a seventh-order lens and lamp were substituted for the reflectors and lamps previously in use.

The original tower at Fanjoys Point was replaced with a modern beacon in 1971.

For a larger map of Fanjoys Point Lighthouse, click the lighthouse in the above map.

From the Trans-Canada Highway, take Exit 347 and travel north on Route 10 for 4.0 km (2.5 miles), passing through Mill Cove, and then turn left onto Fanjoy Point Road and follow it to its end near where you will find the lighthouse.