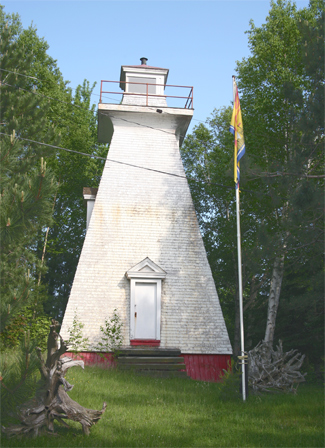 When New Brunswick became a separate colony from Nova Scotia in 1784, Ste. Annes Point, which had just been settled by loyalists the previous year, was named the capital, largely due to its central inland location that made it less prone to an American attack than say Parrtown (present-day Saint John). In 1785, a street plan was laid out west of Ste. Annes Point, and this new site, named "Frederick's Town", in honour of Prince Frederick Augustus, the second son of King George III, was made the capital. The name was soon shortened to Fredericton. On August 20, 1869, six beacon lights were put into operation on the Saint John River to aid steamships operating between Fredericton and Saint John. These lights were located from north to south at Wilmot Bluff, Oromocto Shoal, No Mans Friend, Oak Point, Sand Point, and Swift Point. For $1,044, John Duffy erected all six lights, which were rather crude, consisting of a lantern on a mast or a lantern on a mast atop an open framework. The total cost for the six lights, including construction, superintendence, and lighting apparatuses, was $2,342, and it was anticipated that another $600 would be spent to acquire the sites.

J.D. Wilmot, who owned the property where Wilmot Bluff Light was erected, was appointed first keeper of the light and served in that capacity until 1893.

The original light, a lantern hoisted atop a mast, exhibited a white light at a focal plane of 104 feet above high water mark. The light was partially destroyed by fire in 1882, but it was thoroughly repaired and placed back in operation.

All of the original six lighthouses built on the Saint John River were later replaced by enclosed structures. These improvements started in 1895 after some of the towers had become dilapidated and continued until 1908, when work on a new Wilmot Bluff Lighthouse was finished.

John C. Plamer, of Kars, was awarded a $1,060 contract to construct the new lighthouse  a square tower, with sloping sides, surmounted by a square wooden lantern. The lighthouse stands on a cribwork foundation and measures forty-two feet from its base to the top of the ventilator on its lantern.

Wilmot Bluff Lighthouse was decommissioned in 1967, and today it is barely visible from the water. Indeed, it is hard to believe that it is still in its original location.

Clarence Gillies was the last keeper of the light and served from 1949 to 1967. When the lighthouse was decommissioned, he expressed an interest in purchasing it, however the government favored having the tower moved. In June of 1969, the lighthouse was instead sold for $604 to Gillies' son-in-law, B. Napier Simpson, who planned to cut it into three sections and move it to Ontario. This plan proved too costly, and after six months the government threatened legal action as the agreement had been to either remove the lighthouse or reduce its height by 15 so as not to confuse mariners (this amounted to removal of the lantern).

Mrs. Gillies, whose husband Clarence had unfortunately passed away by this time, was very upset by the thought of the lighthouse being demolished or blemished so in the end the government agreed to let the lighthouse remain where it was. Napier signed ownership of the tower over to his mother-in-law who in turn signed it over to her son Gerald Gillies.

In February of 1970, the Superintendent of Lights inspected the property and agreed that Gerald Gillies could in fact keep the lighthouse intact at its original location if it were maintained in good condition. Ironically by this time the new skeletal tower that had replaced the lighthouse was already declared surplus as well.

Gerald and his wife Jo have maintained the lighthouse in a reasonable manner doing a bit of maintenance work each year. While some sections of the tower may be in need of paint, the grounds surrounding the light are always maintained in a park-like manner.

For a larger map of Wilmot Bluff Lighthouse, click the lighthouse in the above map.

Take Nevers Road Exit (#297) off the Trans-Canada Highway and go north on Nevers Road until it ends at Route 102. Make a right onto Route 102 and continue past Fredericton Airport. When the road makes a sharp 90° curve to the right, continue straight ahead onto Thatch Road. The lighthouse will be on your left shortly after you leave Route 102. The tower is on private property but can be viewed from the top of the driveway.