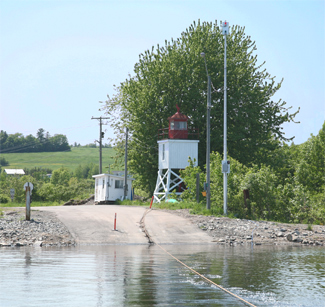 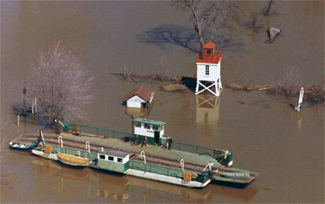 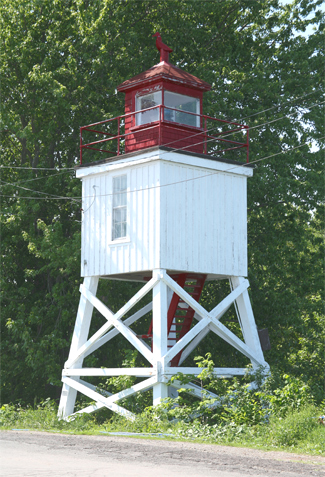 The Village of Gagetown is situated on the west bank of the Saint John River, just above a point where the main branch of the river makes an almost 90° turn. Formerly named Grimrose, the village was home to Acadians, many of whom settled along the Saint John River during the Explusion of the Acadians. As part of the Saint John River Campaign (1758  59), which saw Colonel Robert Monckton lead a force of 1150 British soldiers on a mission to destroy Acadian settlements on the Saint John River, fifty Acadian families were forced to abandon their homes in Grimrose. Every building in the village was burned, livestock was slaughtered, and many fields were torched. Renamed Gagetown, after British General Sir Thomas Gage, who was granted a large tract of land in New Brunswick for his service in the Seven Years War, the village later became a Loyalist community following the American Revolutionary War. In the late 1800s and early 1900s, the village was a stop for steamboats, which carried passengers along the river between Fredericton and Saint John.

Gagetown received its first lighthouse in 1895, when a square wooden pyramidal tower, surmounted by a square wooden lantern, was erected atop a cribwork pier. The tower, which measured forty-seven feet from the deck of the pier to the vane on its lantern, was painted white and its lantern red. The towers fixed white light, shown at an elevation of fifty-three feet, was intended to guide vessels along the river between Jemseg and Upper Musquash Island and, in particular, to mark the dramatic turn in the river.

This peculiarly sharp bend was known as No Mans Friend, as sailing vessels were forced to tack laboriously as the narrowness of the river made maneuvering difficult. No Mans Friend was the site of one of the six beacon lights that were placed along the river in 1869, but by 1893, the tower there was much decayed, and the decision was made to replace it with the Gagetown Lighthouse, built on the opposite shore of the river in 1895.

On April 10, 1901, the fine Gagetown Lighthouse was carried away by the spring freshet. As a temporary measure, a fixed white light was shown from a lantern suspended from an elm tree, situated within twenty feet of the site of the lighthouse. The lighthouse was retrieved, put back in place, and then reactivated on June 22, 1901. The cost of rebuilding the foundation and repairing the lighthouse came to $269.

The present Gagetown Lighthouse is likely the second tower on this site. The original lighthouse was destroyed by ice in April of 1934. The current design with its open supportive stilts has helped lengthen the lifespan of this lighthouse.

The lantern room is still equipped with a Chance Brothers seventh-order drum dioptric, a lens built specifically for use in Canada according to Mr. Kenneth Sutton-Jones, formerly of Chance Brothers Ltd.

Gagetown Lighthouse is located at the western end of the ferry that connects Gagetown with Lower Jemseg. In March 2009, the government announced the ferry, which over the previous three years serviced an average of 1.3 vehicles per trip, would be eliminated along with those at Belleisle and Hampstead. Public outcry managed to save the Gagetown and Belleisle ferries, though their schedule was reduced, but the Gagetown ferry was shut down in February 2016.

For a larger map of Gagetown Lighthouse, click the lighthouse in the above map.

From Route 103 just south of Gagetown, turn east on Ferry Road to reach the lighthouse and the ferry landing. Note that ferry service was discontinued in February 2016.