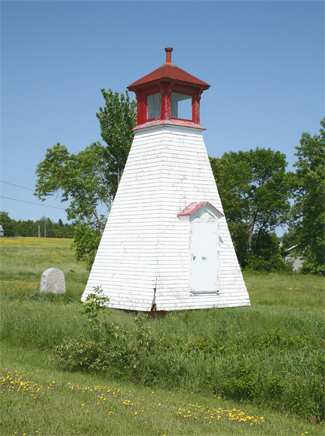 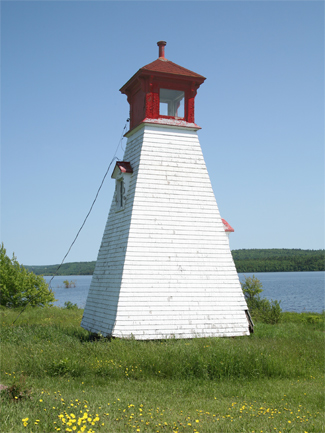 Washademoak Lake isnt really a lake by most peoples definition but rather an expansion of the Saint John River or perhaps a fjord. The primary entrance to the lake lies between Hog Island to the south and on the north by the tip of a peninsula that extends from the mainland.

In 1874, Parliament made appropriations for several lighthouses in New Brunswick, including a beacon light to mark the entrance to Washademoak Lake. This beacon light actually turned out to be a set of range lights, one of which was placed on Lower Musquash Island and the other at Hendry Farm, near Central Cambridge.

The lights, which consisted of open framework towers, painted brown and topped with white lanterns, were completed in 1875 at a cost of $863.50, but they were not put into operation until April 1, 1876. J.C & J.Q. Wetmore were paid $595 to erect the towers, E. Chanteloup received $214.50 for lighting apparatuses, and George Nixon was paid $48 for glass. The light on the east side of Lower Musquash Island was elevated twenty-six feet above the high water mark, while the one on Hendry Farm was elevated thirty feet. Joseph Hendry was appointed first keeper of Hendry Farm Light, and Daniel Smith was the first person responsible for Lower Musquash Island Light.

The 1878 List of Lights and Fog Signals on Coasts, Rivers and Lakes of the Dominion of Canada provides the following instructions for using the pair of lights to enter or exit Washademoak Lake.

In 1892, it was noted that the two towers at the entrance to Washademoak Lake were dilapidated, and as it would cost nearly as much to repair them as build new lighthouses, plans and specifications were drawn up for new structures. John A. Jones was the lowest bidder for the project and was awarded a $675 contract. The new lighthouses were finished in July of 1893.

Sixth-order dioptric lenses were installed in the range lights in 1910 in place of catoptric lighting apparatuses. The lens on Lower Musquash Island was visible over 270°, while the lens at Hendry Farm covered 240°.

E. Melvin Hendry, a member of the Hendry family who owned the farm surrounding the light and who lived just a few hundred yards from the tower, served as keeper from 1880 to 1888 and again from 1897 until his death 1899. Melvin's daughter, Annie Melissa, who had been keeping the light for some time, was appointed keeper in his place. Annie served until 1923, when she was married, and her sister Mary then took charge of the light for three years until her own marriage.

Robert Mott was responsible for Hendry Farm Light from 1927 until the end of 1930, when George B. Jones, Member of Parliament, reported to the Department of Marine that Keeper Mott had been very active in a recent election, hauling people to the polling place and doing everything possible to aid the Liberal Party. Keeper Mott was dismissed on grounds of political partisanship and replaced by Acel Chapman. Five years later, chargers of political partisanship were brought against Keeper Chapman with a request that Robert Mott be re-instated as keeper! While keepers were not allowed to practice political partisanship, politics certainly played a role in their appointment.

Hendry Farm Lighthouse was decommissioned in 1995.

In September of 2005, Senator Joseph Day, acting on behalf of the Minister of Fisheries and Oceans, participated in a ceremony marking the official transfer of Hendry Farm Lighthouse to the Village of Cambridge-Narrows. Today's announcement is an excellent example of how the Government of Canada and local grassroots organizations can work together to secure a bright future for these important structures," said Senator Day. "This ownership transfer gives the community a chance to take advantage of this important piece of our shared history, and to promote new opportunities, like the lighthouse's immense tourism potential.

A monument has been placed near the tower with a plaque that bears the following inscription: Together with the Musquash Island Lighthouse the Hendry Light was a very important navigational aid for boats entering and leaving Washademoak Lake. As a boat entered the narrow channel it would be oriented so that the stern pointed to the Musquash Light and the bow pointed to the Hendry Light for safe passage into the lake. Over the years the Hendry family and their descendants and nearby neighbours were the keepers of the light.

For a larger map of Hendry Farm Lighthouse, click the lighthouse in the above map.

The lighthouse is owned by the Village of Cambridge-Narrows. Grounds open, tower closed.