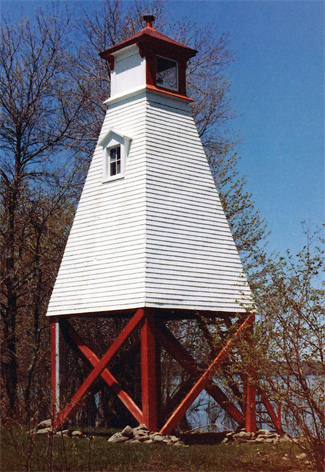 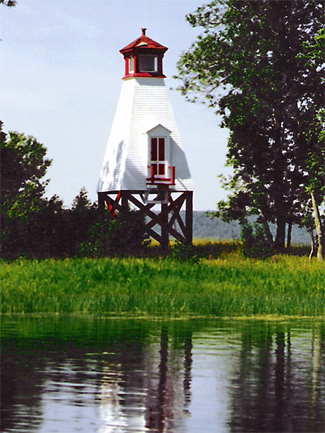 Lower Musquash Island is an irregularly shaped island that encloses a freshwater lagoon of almost equal area with its land surface. The island is situated at the entrance to Washademoak Lake, which is not an actual lake but a broadening of the Saint John River. In 1874, Parliament made appropriations for several lighthouses in New Brunswick, including a beacon light to mark the entrance to Washademoak Lake. This beacon light actually turned out to be a set of range lights, one of which was placed on Lower Musquash Island and the other at Hendry Farm, near Central Cambridge.

The lights, which consisted of open framework towers, painted brown and topped with white lanterns, were completed in 1875 at a cost of $863.50, but they were not put into operation until April 1, 1876. J.C & J.Q. Wetmore were paid $595 to erect the towers, E. Chanteloup received $214.50 for lighting apparatuses, and George Nixon was paid $48 for glass. The light on the east side of Lower Musquash Island was elevated twenty-six feet above the high water mark, while the one on Hendry Farm was elevated thirty feet. Joseph Hendry was appointed first keeper of Hendry Farm Light, and Daniel Smith was the first person responsible for Lower Musquash Island Light.

The 1878 List of Lights and Fog Signals on Coasts, Rivers and Lakes of the Dominion of Canada provides the following instructions for using the pair of lights to enter or exit Washademoak Lake.

In 1892, it was noted that the two towers at the entrance to Washademoak Lake were dilapidated, and as it would cost nearly as much to repair them as build new lighthouses, plans and specifications were drawn up for new structures. John A. Jones was the lowest bidder and was awarded a $675 contract. The new lighthouses were finished in July of 1893.

John Kelly, Inspector of Lights, noticed that large sections of the clay bank in front of Lower Musquash Island Lighthouse had been lost to the freshet since the new tower had been built some distance inland from the previous one. To protect the bank, Kelly had a breakwater constructed by placing a forty-foot-long log along the bank with six cross ties that ran in perpendicular to the long toward the tower. Fifty loads of stone along with brush were then placed atop the wooden structure. This work was carried out by W.B. Barnes at a cost of $42.50.

Sixth-order dioptric lenses were installed in the range lights in 1909 in place of catoptric lighting apparatuses. The lens on Lower Musquash Island was visible over 270°, while the lens at Hendry Farm covered 240°.

Lower Musquash Island Lighthouse was discontinued in 1922, but then re-established two years later at the opening of navigation in 1924.

In 1994, Lower Musquash Island Lighthouse was decommissioned. The lighthouse has apparently been given to the owner of the island, and unfortunately rumor has it that he plans to have it moved.

For a larger map of Lower Musquash Island Lighthouse, click the lighthouse in the above map.

Lower Musquash Island Lighthouse is best viewed by boat, but a distant view can be had from Hendry Farm Lighthouse.