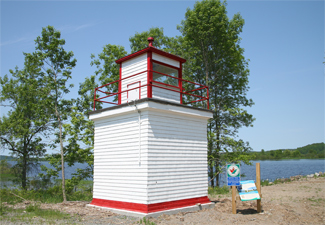 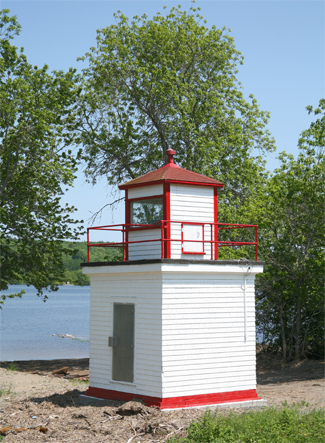 Hampstead is located on the western shore of the Saint John River, north of Belle Isle Bay and south of Washademoak Lake. A cable ferry formerly operated at Hampstead, connecting with Wickham on the east shore, but this service was terminated in 2009.

On October 29, 1900 a mast light was placed into operation on the public wharf at Hampstead. This fixed white light, elevated thirty-six feet above high water mark, was shown from a lens lantern, hoisted up a thirty-one-foot mast that had a shed at its base. The structure, intended to guide river traffic to the wharf, was painted white and built at a cost of $35.43.

In 1912, the mast light was replaced by a twenty-one-foot-tall square wooden tower built under contract by G.W. Palmer of Tennants Cove.

When completed in 1912, the tower stood atop a wooden cribwork on the south side of the low water wharf. The light was deactivated in 1994, and in 1999 the Coast Guard determined that its supporting cribwork was unstable. The tower was accordingly relocated to the high water wharf, where it was chained in place and its lantern boarded up. By 2000 the Saint John River Society had assumed stewardship of a number of concrete wharves along the river including the one at Hampstead. It was thought that they would take possession of the lighthouse as well, and in 2001 they moved it to higher ground behind the wharf to avoid damage from the spring freshet. The society acquired Hampstead Lighthouse in 2009, and using grant money restored and painted the tower in 2010.

For a larger map of Hampstead Wharf Lighthouse, click the lighthouse in the above map.

From Route 102 in the community of Hampstead, take the turnoff for the former Hampstead ferry. Hampstead Lighthouse is located near the road not far from the high water wharf.