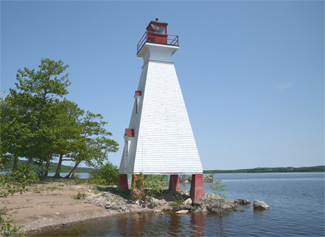 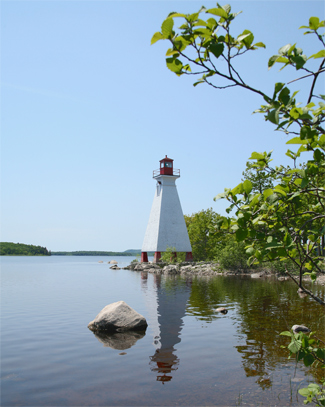 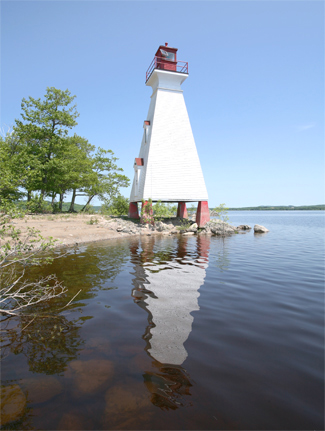 Oak Point is situated at the northern end of Long Reach, a wide, straight section of the Saint John River that runs along the west side of the Kingston Peninsula. Several islands, including Rush Island, Isle of Pines, Rocky Island, and Grassy Island, are found near Oak Point and present a series of obstacles for mariners navigating this stretch of the river.

In 1848, Mr. Woodward presented to the Colony of New Brunswicks House of Assembly a petition signed by Robert W. Crookshank, William O. Smith, Charles Ward, John Duncan and 104 other merchants and ship owners of the City and County of Saint John calling for a lighthouse at Oak Point. Precedence in the colony dictated that construction and maintenance of lighthouses should be paid for by a duty levied on vessels that benefited from them, and as steamboats plying the waters of the Saint John River were paying no duty, it was recommended a bill calling for the collection of light duties on the river be passed.

Such legislation was not passed that year or in 1849, and the Saint John River would remain dark until after New Brunswick joined Canada. Finally, in 1869, two years after Confederation, the Department of Marine saw that six beacon lights were established at Oak Point, Sand Point, Swift Point, Wilmot Bluff, Oromocto Shoal, and No Mans Friend. For $1,044, John Duffy erected all six lights, which were rather crude, consisting of a lantern on a mast or a lantern on a mast atop an open framework. The total cost for the six lights, including construction, superintendence, and lighting apparatuses, was $2,342, and it was anticipated that another $600 would be spent to acquire the sites.

Charles Theal was the first keeper of Oak Point Light, and he, along with the other five keepers hired on the Saint John River in 1869, were paid an annual salary of $80. After the river lights had been in operation for a year, the Department of Marine reported that the passenger steamers and other vessels plying the river found them to be of great service.

In 1902, the current Oak Point Lighthouse was constructed. A detailed description of this structure is found the Annual Report of the Department of Marine.

The light shown from a lantern on a mast on Oak point, river St. John, has been replaced by a stronger light shown from an inclosed lighthouse tower, built 56 feet outside the site of the old light, on the shore on the east extremity of the point. The light shown from the new tower is fixed white dioptric, elevated 49 feet above high water mark, and visible 12 miles from all points of approach. The lighthouse is a square wooden building with sloping sides, painted white, surmounted by a square wooden lantern painted red. The height of the building from its base to the ventilator on the lantern is 48 feet. The old mast and shed have been taken down.

The treacherous currents along this section of the river make it unsafe year-round as only a light ice forms in even the coldest of winter weather. During the spring freshet, most of the point is under water making the lighthouse appear as if it sits alone far out into the river. Although the tower has flooded on occasion, it does not have the recurrent problem faced by the Belyeas Point Lighthouse.

The Kiwanis Club that operates the nearby campground on Oak Point had a lease on the Oak Point Lighthouse for several years in the late 1990s. A deck and stairs were built on the landward side of the tower, and for a couple of years, the lighthouse served as a gift shop. The club later installed a window on the ground floor of the tower, facing the river, and started overnight rentals of the lighthouse. When the Coast Guard was notified of the alterations, the lease was immediately terminated, the deck and stairs torn down, and the window removed and boarded up leaving no outward evidence that it had ever existed.

For a larger map of Oak Point Lighthouse, click the lighthouse in the above map.

From Route 102 on the west side of Saint John River, make a right turn at the sign for Oak Point Provincial Park. From mid-May through Labour Day, there is an entrance fee to the park even if you are simply driving out to the point to see the lighthouse.