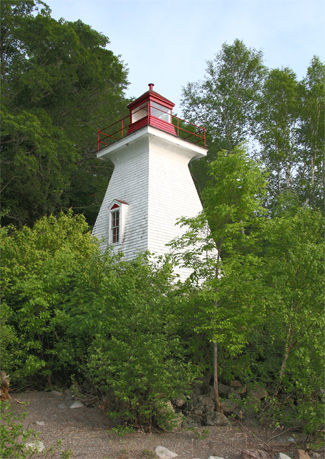 In 1894 a large hotel was opened near the community of Long Reach in a sub-community called "The Cedars" due to the large cedar trees gracing the nearby shores of the Saint John River. Several years later it was decided that a proper lighthouse should replace the existing mast and shed light located just down river at Williams Landing. Some debate ensued as to where the lighthouse should be located, but in 1904 a tower was built on the shore below the hotel. Four years later in 1908 a large wooden wharf was constructed to accommodate the burgeoning riverboat trade. The Cedars became a destination for city folk and tourists alike who wanted a day, week or a season to relax in the country along the banks of the beautiful Saint John River, and in those days the river was the main highway to get there. Farmers met the boats to send their goods to market, and the arrival of a riverboat was always a social occasion that brought neighbors together. The era of the riverboats eventually came to an end, and the wooden wharves fell into disrepair. The Cedars Hotel was torn down in the 1970s so all that remains of that era is the lighthouse.

The Cedars Lighthouse was decommissioned in May of 1994, and in 1996 Peninsula Heritage began trying to acquire it from the federal government. It took nine years, but in 2005 the lighthouse was finally turned over to the group. Unfortunately the tower is not a high priority for the organization, which doesn't understand the potential of the project. Though the future of the lighthouse is still in question, a trail to it was finally opened in 2008 making the secluded lighthouse accessible to the public by land for the first time in its history.

Lighthouse enthusiast Kelly Anne Loughery lives near The Cedars Lighthouse, and spearheaded the task of acquiring it from the federal government. Kelly Anne's great-great aunt, Clotille May Bissett, became the first and only female keeper of record when her husband Thomas, who previously held the position, passed away in June of 1932. Starting at a salary of $150 per year, Mrs. Bissett served as keeper for at least four years.

For a larger map of The Cedars Lighthouse, click the lighthouse in the above map.

On the west side of Kingston Peninsula, take Route 845 to the community of Long Reach. Approximately one kilometer north of Williams Road, you will see Frances Smith Memorial Hall on the east side of Route 845 and St. James church on the west side. Directly across from the hall, behind a group of mailboxes, and to the south of Ganong Road, there is a small footpath, marked with a sign during the summer months, that leads 0.3 km to the lighthouse. Do not attempt to drive to the lighthouse or walk down any roads as all other approaches are over private property.

Find the closest hotels to The Cedars Lighthouse