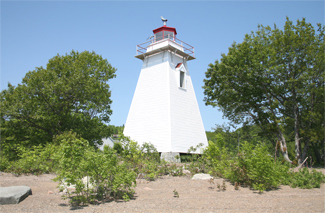 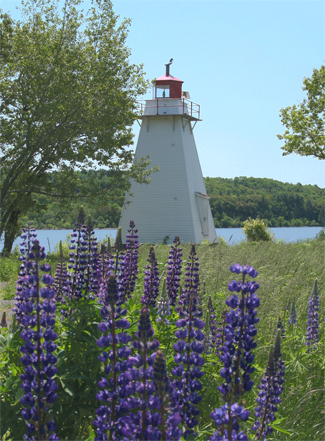 Many points along the Saint John River and its tributaries are named after the early owners of the land, and as lighthouses were built on these points, it was only natural that the landowners, in many cases the only residents living within miles of the site, were made the first keepers of the lights. This happened at Belyeas Point and at McColgan Point, Robertson Point, Cox Point, Fanjoys Point, Bridges Point, and Palmers Point.

Belyeas Point is situated at the southern end of Long Reach, a wide, straight stretch of the Saint John River that runs along the west side of the Kingston Peninsula. In 1881, Parliament appropriated $800 for the erection of a light at Belyeas Point, tenders were called for, and a $395 contract for the construction of the tower was awarded to Saunders Clark of Carleton.

Belyeas Point Lighthouse was completed the following year and commenced operation on June 1, 1882, with Spafford Barker Belyea serving as its first keeper at an annual salary of $80. The Annual Report of the Department of Marine for that year provides the following information on the lighthouse.

The light is fixed white with an illuminating dioptric apparatus of the 6th order; is elevated 40 feet above water mark and should be visible 11 miles from all points of approach. The tower, which stands upon a small timber crib, is a square wooden building painted white, and 36 feet high from the pier to the vane on the lantern. The lighthouse is situated on the extreme point near the water's edge, on the west side of the river, and the light is for the purpose of guiding vessels clear of Purdy's Shoal on the opposite side of the river, and for the general purposes of navigation.

A decade after the lighthouse was built, the Annual Report noted that the inside and outside of the tower were painted from top to bottom, the block and tower were in good order, and the interior was clean and well kept.

As seen in a photograph to the left, Belyeas Point is prone to flooding. Severe flooding damaged the original lighthouse in the 1930s, leading to the tower being rebuilt and relocated from its original position lower on the shore. Even resting atop pylons on more elevated terrain, the new Belyeas Point Lighthouse has been damaged by the spring freshet several times over the years.

For a larger map of Belyeas Point Lighthouse, click the lighthouse in the above map.

Take Exit 80 from Route 7 and travel north on Route 102 for approximately 3.2 km (2 miles). In the community of Morrisdale, make a right on Lighthouse Lane and drive down the hill. The lighthouse used to be easily viewed from the cul-de-sac but now homes have been built that block the view and limit access. The best view is now from the river.