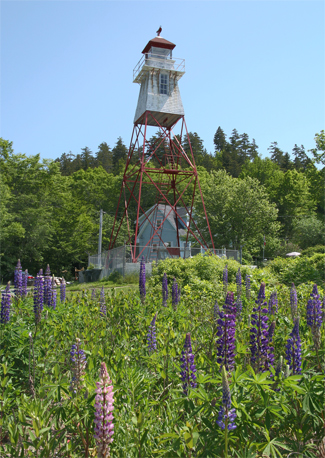 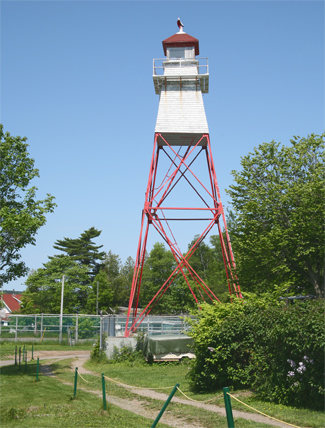 The Saint John River was given its name by Samuel de Champlain in 1604, as he arrived at the rivers mouth on that saints feast day, June 24. The river has its origins in Maine and Quebec, and from there, water travels 673 km (418 miles) before reaching the Bay of Fundy. In 1816, the 105-foot General Smythe, named for New Brunswick's second Imperial Governor, became the first steamboat to offer passenger service on the Saint John River. Traveling at five-miles-an-hour, journeys between Saint John and Fredericton initially took a full day, but the advent of larger steamers, such as the Fawn and the Rothesay, cut the travel time in half by the 1860s. Built in 1897 and capable of carrying 1,000 passengers, the 200-foot-long SS Victoria was the largest steamship to serve the river. Introduction of train service and the advent of the automobile brought an end to steamboat service, and the last run was made in 1946.

On August 20, 1869, six beacon lights were put into operation on the Saint John River to aid the steamships operating between Saint John and Fredericton. These lights were located from south to north at Swift Point, Sand Point, Oak Point, No Mans Friend, Oromocto Shoal, and Wilmot Bluff. For $1,044, John Duffy erected all six lights, which were rather crude, consisting of a lantern on a mast or a lantern on a mast atop an open framework. The total cost for the six lights, including construction, superintendence, and lighting apparatuses, was $2,342, and it was anticipated that another $600 would be spent to acquire the sites.

J. Cauldfield was the first keeper of Sand Point Light, and he, along with the other five keepers hired on the Saint John River in 1869, were paid an annual salary of $80.

In 1895, a survey of the site at Sand Point was made in order to acquire land for the construction of a new enclosed tower to replace the original open-framed structure. The purchase of the property proved to be complicated as the owner was outside Canada.

A new Sand Point Lighthouse was completed in 1898, and the Annual Report of the Department of Marine for that year provides detailed information on it.

The mast on an open framework, from which the light was shown at Sand Point, on the River St. John, has been removed and replaced by a square skeleton framed steel tower, with sloping sides, surmounted by an enclosed wooden light room and by a square wooden lantern.

The new lighthouse stands on the site of the old mast, about 150 feet back from high water mark, on the most prominent part of the point. The lantern and iron-work are painted red, and the enclosed upper part of the tower is painted white. The height of the building, from the base to the ventilator on the lantern is 58 feet.

The light shown from the new building is a seventh order dioptric, fixed white light, elevated 60 feet above high water mark, and should be visible 13 miles from all points of approach by water.

At the opening of navigation in 1901, the entire superstructure above the iron framework, including the lantern room, was painted white to serve as a more conspicuous daymark against the background of dark fir trees.

Sand Point Lighthouse is the tallest lighthouse on the St. John River. In 1991, the tower underwent a thorough renovation.

The house adjacent to the tower belongs to Don Morrison whose father was a keeper of the Sand Point Lighthouse.

For a larger map of Sand Point Lighthouse, click the lighthouse in the above map.

From Route 845 on the lower end of Kingston Peninsula, take Sand Point Wharf Road south to its terminus at the lighthouse. Note that the wharf located adjacent to the lighthouse is private as is all of the cottage property around it. Please be respectful.