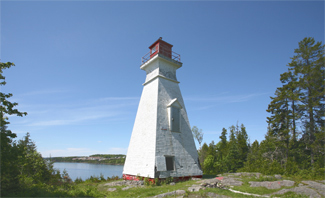 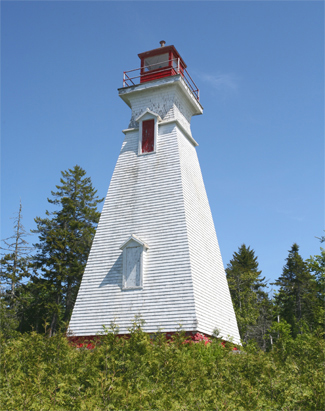 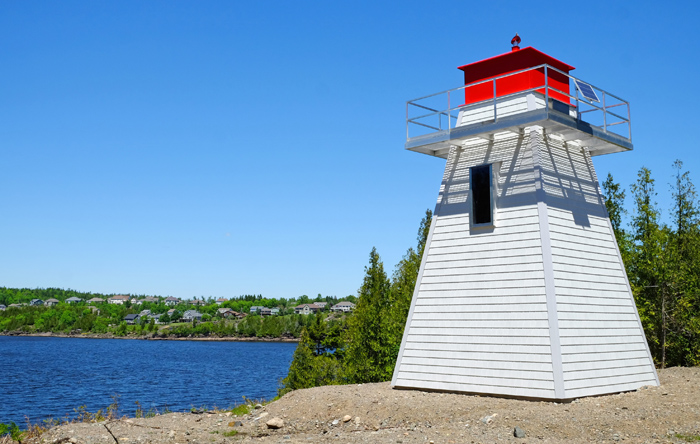 Swift Point Light was one of six beacons erected in 1869 along the Saint John River between Fredericton and Saint John. The cost of constructing the lights, including the lighting apparatuses, was $2,342, with the sites costing an additional $600 or so. The original Saint John River Lights were placed in operation on August 20, 1869, with John Nelson Williams serving as the first keeper at Swift Point. In 1872, the lantern at Swift Point, also known as Green Head, caught fire and forced the suspension of the light for a few nights. After eighteen years of service, Keeper Williams resigned in 1886. A small shed for storing oil was built at the station in 1889.

The Department of Marine report for 1892 noted that the skeleton lighthouse at Green Head was in bad order, and tenders were to be invited during the coming winter for a new enclosed tower. It seems improbable that a replacement tower was built as the Departments report for Swift Point in 1895 notes: part of the mast has been renewed, a new house has been built for the lantern and new steps placed, and a survey of the site had been made as a preliminary to building an improved inclosed tower.

While it is hard to get a good mental image of the original light at Swift Point from the Department of Marine records, the report for 1896 does provide great detail on the new tower built at the point that year.

A new lighthouse has been erected at Green Head, 24 feet east of the site formerly occupied by the old light on a mast, which is now discontinued. The lighthouse is a white, square wooden building 50 feet high, situated 105 feet above high water mark. The illuminating apparatus is dioptric, the light being fixed white, elevated 150 feet above the surface of the water and visible 10 miles from all points of approach by water. The work was done under contract by Mr. G. W. Palmer, the lowest bidder, his contract price being $579.

The pressed lens used in the tower was replaced with a seventh-order dioptric lens in 1899.

In 1900, a hand foghorn was given to Keeper Thomas E. Looney at Swift Point to be sounded whenever the fog signals of vessels were heard in the vicinity of the station. A mechanical fog bell, installed by day labour under Inspector John Kelly at a cost of $206, took the place of the hand foghorn in 1914.

Swift Point Lighthouse works in tandem with Sand Point Lighthouse to guide vessels along the Saint John River and locate the narrow entrance to the Reversing Falls section, an area of often confusing tributaries, bays, and islands.

On June 13, 2017, residents in Millidgeville noticed Swift Point Lighthouse, located across the Saint John River, was on fire and notified the fire department. Due to the remoteness of the location, the lighthouse was almost completely destroyed before firefighters could arrived on the scene. It was challenging getting water into it because it was a long, old dirt road with heavy brush and forest, said division chief Mark Wilson of the Saint John Fire Department. They tried to get some pumps brought in, but by the time they got everything in, the structure fell in on itself. So at that point their attention turned to protecting the wooded area. The cause of the fire was not immediately known. The Canadian Coast Guard worked quickly to replaced the structure. A square, pyramidal tower, similar in shapte but shorter than the tower it replaces, was built in Saint John and then transported to the site overlooking the river. After finishing work was completed, the solar-powered light was placed in operation in January 2018.

For a larger map of Swift Point (Green Head) Lighthouse, click the lighthouse in the above map.

From Route 1 at Catherwood, take Exit 119 and travel north along Catherwood Street to Manawagonish Road. Turn right onto Manawagonish Road, and at the first traffic signal make a left onto Church Avenue, which quickly becomes Dever Road, and then make a quick right onto Green Head Road. Continue on this road then make a right turn onto Quarry Road, which will loop back onto Green Head Road. A little over midway along this loop, look for a gated dirt road on your right, where you need to park and begin your hike. As you start, you will be headed towards the lighthouse so avoid any side trails. It should take about 20 minutes to reach the lighthouse.