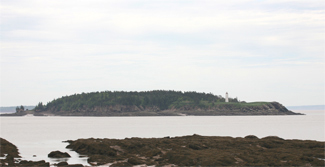 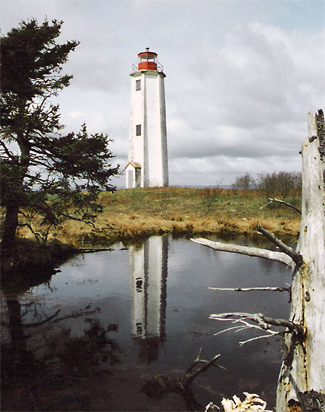 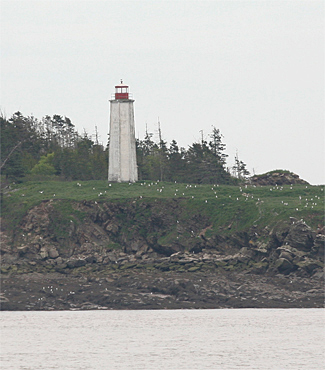 Settlement of the Petitcoidac and Memramcook river valleys, situated at the head of the Bay of Fundy in present-day New Brunswick, began around 1700. In the late 1840s, Joseph Salter opened a shipyard in a community located at a 90° degree turn in the Petitcodiac River known as The Bend. The business thrived and soon employed over 1,000 workers, allowing The Bend to incorporate as Moncton in 1855. The upper portion of the Bay of Fundy between New Brunswick and Nova Scotia is known as Chignecto Bay. Towards its northern limits, this bay is forked, with the tip of the dividing peninsula known as Cape Maranguin. The entrance to the western fork, which is known as Shepody Bay and leads to the Petitcoidac and Memramcook Rivers, is defined by Cape Marnguin to the east and Grindstone Island to the west.

An 1847 report describing the trade and resources of the area noted:

The ledges of Sandstone at Cape Maranguin furnish Grindstones of superior quality, and the business of making them is prosecuted to some extent. A number of persons engaged in making Grindstones reside on the Cape, and each man makes on the average four hundred Stone, by measurement, during the season. The Stone, by measurement, is two feet in diameter, and four inches thick, the value of which at the Cape is two shillings, or a little more. The Grindstones when made, are principally bought by persons from the opposite shore of Nova Scotia, at the South Joggins, and shipped to the United States, where they are in high repute and extensively used for grinding and polishing tools and cutlery. The largest Grindstone made at the Cape the past season was six and a half feet in diameter and twelve inches thick. The whole quantity made annually does not fall far short of 18,000 stone by measurement, and the quantity may be increased to any desired extent, as the ledges are extensive and seem to be almost inexhaustible.

The grindstone trade was also pursued on Grindstone Island and is how the island got its name.

A petition from sixteen inhabitants of Westmorland County calling for the establishment of a lighthouse on Cape Maranguin was presented to the New Brunswick government in 1847. The Commissioners of Light Houses for the Bay of Fundy examined the matter and concurred that a light on Cape Maranguin, depending on its exact location, could aid navigation in both branches of the Cumberland Basin. Twenty-three individuals employed in the coasting trade submitted a similar petition for a lighthouse on Cape Marnguin in 1849. This was followed in 1854 by a petition of nineteen ship owners and shipmasters calling for a lighthouse on Grindstone Island. After additional petitions were received in 1885, the government finally approved £400 to be given to the commissioners to erect a lighthouse on either Cape Maranguin or Grindstone Island.

The commissioners recommended Grindstone Island, which could also mark the entrance to Five Fathom Hole, the only safe harbour of refuge for vessels on the eastern side of the upper bay. After inquiring about a parcel on the island, the commissioners found out that St. Anns Church of Sackville, who owned the island, had leased it out for twenty-one years to Isaiah Bacon, who in turn had leased it to Dorchester Freestone Manufacturing. After a half-acre of land was finally obtained from the church, plans and specifications for the lighthouse were drawn up in early 1859, and a contract for the construction of a lighthouse and keepers dwelling on Grindstone Island was entered into with Jonathan R. Stevens.

The following Notice to Mariners was widely published in 1859 to announce the establishment of the light on Grindstone Island:

Notice is hereby given, that on and after Thursday Night, the 20th October instant, a fixed White Light will be exhibited from sunset to sunrise in the Lantern on the Wooden octagonal Light Tower, sixty feet above the level of high water, lately erected on the western point of Grindstone Island in Chignecto Bay, in latitude 45 43' 13" N., longitude 64" 37' 25" W. The octagonal Tower is painted white as is also the Keeper's House, one story, situated about 50 feet to the eastward of the Tower.

The first keeper of Grindstone Island Lighthouse, which employed four lamps backed by twenty-two inch reflectors in its lantern room, was James Clark who served until 1873, when he was obliged to resign his position due to the poor health of his wife. A small kitchen was added to the keepers dwelling during his service.

In July of 1876, John H. Harding, Agent of the Department of Marine in Saint John, visited Grindstone Island in company with William M. Smith to select a suitable site for a steam fog alarm. J. B. Stevens constructed a coal shed and building for the fog signal the following year, and F. W. Holmes of London, England supplied the trumpet and necessary machinery. When the trumpet, which contained a vibrating reed, was put in operation in December of 1877, it was found that the boiler was too small to supply the necessary amount of steam. The operation of the fog alarm had to be discontinued while an addition to the building was made and a larger boiler installed. A pond, thirty-five feet long, seventeen feet wide, and about four feet deep, was excavated in the swamp adjoining the lighthouse property, and underground pipe was put in place to convey the needed water to a storage tank near the fog alarm.

While the work was being done for the fog alarm, a new platform for landing coal and supplies was constructed near the lighthouse, which eliminated the need to hand carry five-gallon cans from the other side of the island where they were stored at a cost of $25 per year. Decayed sills beneath the lighthouse were also replaced at this time along with the floor of the lighthouse, which was rotten.

The annual salary of Keeper Styles was raised to $700 after the fog alarm was completed, but from this, he was required to provide a competent engineer to work the fog trumpet. A brick reservoir, capable of holding 19,000 gallons of water for the fog alarm, was constructed on the island in 1879 at a cost of $525.

In 1892, the lighthouse was moved closer to the keepers dwelling, and a new fog alarm building was constructed near the tower, on the extreme southwest point of the island. Isaac C. Prescott built this structure under contract at a cost of $1,235, and Neptune fog horn machinery was installed therein to replace the less powerful Holmes trumpets.

A short article appearing in the November 15, 1911 edition of the Boston Daily Globe reported that one of the four large lamps in the tower at Grindstone Island, about 100 miles north of Saint John, had exploded and set fire to the wooden lighthouse, driving the keeper and his assistant from their post. This loss necessitated the construction of the present 59-foot-tall Grindstone Island Lighthouse that sports a design unique to New Brunswick: a concrete hexagonal tower, with six buttresses. Work on this tower, atop which a fourth-order dioptric illuminating apparatus was installed, was carried out in 1911 and 1912 by day labour under W. F. Fitzgerald.

In 1959 two new keepers dwellings were built, and a few years later the station was automated. The station was destaffed in 1970, and a year later station's buildings, excluding the tower, were declared surplus to needs. In 1972, the two keepers dwellings were sold to Judson Kelly with the understanding that they would be moved within ninety days. The move did not take place until the following year, and when the new owner realized the logistics of his plan, the houses were abandoned on church property just a short distance from their original location. They are still there today, obscured by the surrounding vegetation and deteriorated beyond any use except shelter for the local wildlife.

In 1984 the light was discontinued, and the lantern was removed from Grindstone Island Lighthouse the following year and set atop the just constructed faux lighthouse at the Saint John Coast Guard base.

Under pressure from local fishermen led by former keeper Wainwright Pappy Weston, Grindstone Island Lighthouse was reactivated in 1986 sans lantern. In 1992 the current lantern, from Pease Island in Nova Scotia, was placed atop the tower. The reactivation of the light, however, was short lived, as in 2001 the lighthouse was decommissioned for a final time.

Grindstone Island is under protection of the Canadian Wildlife Service, and access is restricted as it is a protected area for a number of nesting birds. The island is still owned by the Church of England, however in 2007 there were talks underway of turning it over to the Nature Trust of New Brunswick.

Kelly Anne Loughery was fortunate enough to visit Grindstone Island via helicopter with the Coast Guard in 2002. Despite her shrieks, the pilot skillfully landed without a single casualty to bird or egg. At that time, the exterior of the concrete tower was in decent shape with the exception of needing a coat of paint. The inside, however, was a different story. Mold was evident and part of the metal ladder leading to the lantern had rusted and collapsed. An investigation of the abandoned keepers dwellings revealed much the same and worse.

Pappy Weston passed away in 2004, but not before he was inducted into the New Brunswick Country Music Hall of Fame in 2000. He published a short biography entitled Stories About Me and People I Have Known that includes several chapters about his life on Grindstone Island where he and his wife raised five children.

In October of 2010, the creation of the Grindstone Island Nature Preserve was announced at the Cape Enrage Nature Preserve during the annual meeting of the Nature Trust of New Brunswick. This partnership between Nature Trust of New Brunswick, the Parish of Sackville and the Anglican Diocese of Fredericton will ensure that Grindstone Island remains protected for generations to come.

For a larger map of Grindstone Island Lighthouse, click the lighthouse in the above map.

From Route 114 just west of Riverside-Albert, turn south on Route 915. After 3.5 kilometres, turn left onto Mary's Point Road and continue for 3.9 kilometres, passing Anderson Hollow Lighthouse, to reach Mary's Point Bird Sanctuary. A very distant view of Grindstone Island Lighthouse is possible near the interpretive centre, or you can follow a path down to the beach and hike out to the southeast part of Marys Point at low tide for a closer view.