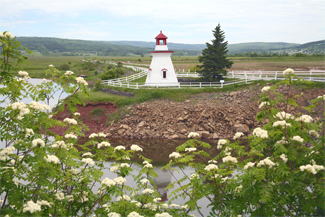 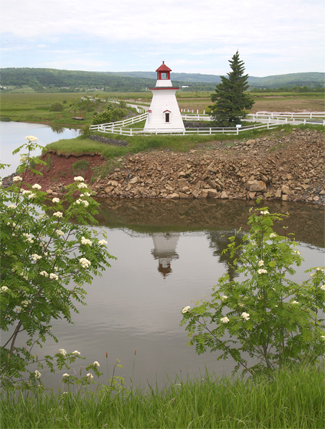 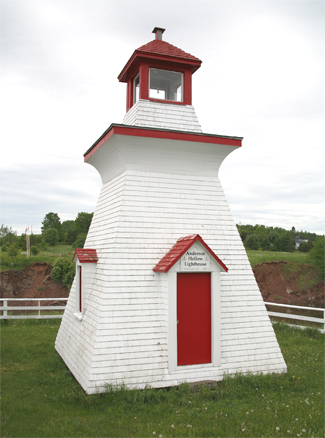 Anderson Hollow Lighthouse is unquestionably the most well-traveled lighthouse in New Brunswick. Originally located on shore near a long breakwater in the community of Waterside, the surviving lighthouse was preceded by two other towers that succumbed to the elements before this tower was built in 1903.

The Annual Report of the Department of Marine for 1889 provides the following information on the first Anderson Hollow Lighthouse that went into operation that year with the Reverend S.C. Moore serving as its first keeper.

A beacon light wasestablished at Andersons Hollow, Chignecto Channel, in the County of Albert, and put in operation on the first day of August last. The light is fixed red, elevated 25 feet above high water mark, and visible a distance of 6 miles. The lighthouse tower is a square wooden building, painted white, with red roof, and is 30 feet high from the wharf to the vane. The light is intended to guide vessels in the harbour of refuge behind the breakwater. Vessels may run for the harbour one hour before high water, giving the light 50 feet of a berth on the port hand.

In 1891, just two years after it was built, the lighthouse was damaged by a heavy storm, but it was repaired and made much stronger by a Mr. Anderson at a cost of $23. Even with this strengthening, the tower was torn from its foundation the following year, but again survived and was returned to its spot on the wharf. A new window was added to the tower in 1894 to increase the arc over which its light was visible, but all the repairs and this improvement were for naught as a gale on November 21, 1895 carried away the end of the pier and the lighthouse.

A new enclosed tower, square in plan, with sloping sides and surmounted by a square wooden lantern, was erected on the outer end of the repaired public wharf in 1898 to replace a temporary pole light that had been maintained since the former tower was carried away by the storm. The work on the tower, which stood twenty-four feet tall from pier to the vane on the lantern, was done under contract by Mr. H.O. Barbour, of Waterside, for $182. A fixed-red light from a seventh-order lens was shown from the lantern room.

Keeper Moore was provided a hand foghorn in 1900 to issue a reply whenever vessels in the vicinity of the station sounded their fog signals. The 1898 Anderson Hollow Lighthouse was destroyed by a storm on January 12, 1902, and a temporary light, a lantern hoisted on a mast, was shown from the outer end of the breakwater until a new tower could be built.

After two towers had been lost, the Marine Department decided to place the third tower on the shore north of the breakwater and directly opposite its outer end. This new lighthouse, constructed by Mr. W. C. Anderson of Waterside for $362, was a similar wooden pyramidal tower with a height of thirty-one feet from its base to the vane on its lantern. The towers fixed white light, shown at an elevation of ninety-one feet above the high water mark, was first exhibited at the opening of navigation in 1903, when the temporary light on the breakwater was discontinued.

A light to mark the outer end of the breakwater was apparently still deemed beneficial as in 1907 a seventh-order Chance anchor lantern, hoisted atop a twenty-two foot pole, went into operation. The following year, cribwork measuring nine feet square with a height of three feet, six inches, was built around the mast light and ballasted with stone. In 1909, the light shown from the 1903 tower was permanently discontinued, its function having been replaced by the mast on the breakwater.

The 1903 Anderson Hollow Lighthouse remained in its position on the bank near the breakwater until at least 1949, for the List of Lights for that year states: if for any reason it becomes impossible to show this fixed white light from the end of the breakwater, a fixed red light will be shown temporarily from the lighthouse on shore.

At some point, the lighthouse was moved to the nearby residence of Herbert Armstrong where it stood next to the familys large Victorian house (still standing). In the early part of the 20th century, Mr. Armstrong served as keeper at the Martin Head Lighthouse, where he and his wife raised five children. The Armstrongs moved to the house in Waterside after leaving Martin Head. The Victorian house was sold in the 1960s, and the lighthouse quickly fell into disrepair.

By the 1980s, the lighthouse and adjacent home were owned by Marty and Elizabeth Tener, who recognized the historic value of the lighthouse and sought to donate it to the Albert County Heritage Trust. Under the guidance of Mary Mijka, a grant was acquired to cover the cost of the move, and in the late 1980s the lighthouse was relocated to the intersection of Route 114 and Route 915 in Riverside-Albert where it stood next to the Old Bank Museum, overlooking the narrow Crooked Creek, and was used for a few years as a craft outlet.

Finally, on October 31st, 2001 (a number of people thought it was a Halloween prank) the lighthouse was moved for hopefully a final time to what later became known as the Harvey Bank Heritage Shipyard Park, a pastoral setting on nearby Marys Point where Shepody River meets Shepody Bay. The Anderson Hollow Lighthouse was fixed up, an old wharf was reconstructed on the former shipbuilding site, and a replica of an old sailing ship was added along with attractive fencing and a picnic area making this one of the most photogenic lighthouses in New Brunswick.

For a larger map of Anderson Hollow Lighthouse, click the lighthouse in the above map.

From Route 915 in Harvey turn northeast onto Marys Point Road, and Anderson Hollow Lighthouse will be visible on your left after roughly 1.6 km (1 mile). The lighthouse is located close to the mouth of Shepody River in Shipyard Park.