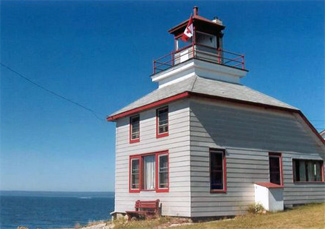 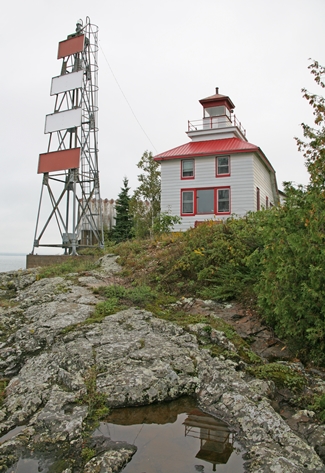 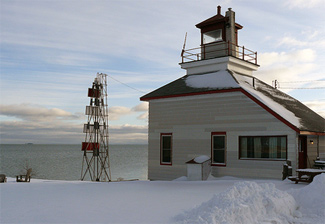 McKay Island Lighthouse is a familiar landmark in the Bruce Mines area and its history is a long and interesting one covering the details of its construction as well as individuals who both maintained the light and worked to preserve it for posterity.

The first light at the Town of Bruce Mines, Ontario was established in 1902 in the form of a lantern placed atop a shed on the communitys new 1,000-foot public wharf. The light, which was visible from up to 5 miles (8 km), shone white and then red, and was assisted by a hand-operated horn in times of fog. Merritt Strum, who served as keeper of McKay Island Lighthouse, was responsible for saving this shed and having it moved to the Agricultural Grounds were it still stands today.

Copper deposits along the north shore of Lake Huron came to the attention of non-native settlers in 1846, and the community of Bruce Mines, named after James Bruce, the Governor General of Canada, was founded to support the mining industry. Bruce Mines is situated on a beautiful, horseshoe-shaped bay, formed by the mainland on the north, French and McKay islands on the southwest and Jacks Island on the northeast. Mariners calling at Bruce Mines pass between the eastern tip of McKay Island and the southern tip of Jacks Island to reach the towns marina.

Over the years, McKay Island has had several owners: the Crown, Montreal Mining Company, Bruce Mines Copper Ltd., and Copper Mining and Smelting Company of Ontario, Ltd. A land grant titled Indenture # 902 includes the lighthouse survey plans drawn by land surveyor James S. Dobie Ontario on June 3, 1905. Two years later, the Canadian federal government built Mckay Island Lighthouse in response to an increase in marine traffic caused by the timber industry, which had replaced the copper mining industry as the main commercial activity in Bruce Mines. In 1910, a deed from Bruce Mines Copper Ltd. transferred title to the lighthouse and one acre of land to His Majesty King George V for $25.

The lighthouse, consisting of a wooden dwelling with a square tower rising from the centre of its hipped roof to a height of 32.8 feet (10 meters), was constructed on the east end of McKay Island, 2 miles ( 3.2 km) from Bruce Mines. Under the foremanship of M.J. Egan, the work was carried out by day labour in 1907 and cost $2,051.89. The light was a fixed white dioptric coal vapour model with visibility of 9.3 miles (15 km), and the accompanying foghorn was hand cranked. A shed close to the water was used to store boats, fuel, coal oil, and gallons of white and battleship grey paint. The foundation of the boathouse can still be seen today on the east shoreline by the lighthouse

The Keepers of the Light
The main job for the keepers of the light was to keep the light well cleaned and fueled, and to light and extinguish it at the proper times. The following keepers served on McKay Island:

Modernization
McKay Island Lighthouse was changed to a flashing characteristic and automated on October 1, 1955, after batteries to run the light were installed in one of the rooms on the main floor. In the 1960s, the Canadian federal government decided to erect a steel tower and tear down the deteriorating lighthouse to save maintenance expenses. By that time, the lighthouses windows were broken and birds had made their nests inside. However, Harold Peterson, who owned the rest of the island and nearby French Island, persuaded the government to sell him the dilapidated lighthouse.

Harold and Fern Peterson put in a road and power lines from Highway 17 through the west end of Bruce Mines and onto French and McKay Islands. In 1967, the federal government made arrangements with Harold Peterson to use his power poles so they could electrify the beacon in the lighthouses lantern room.

Harold Petersons goal was to save the lighthouse structure, and renovations began under the direction of Norman Beilhartz. Norman was a skilled carpenter, plumber, and electrician, and he along with James Beilhartz, James Gjos and Fred Gjos (two brothers from Desbarats) renovated the lighthouse. Their skilled work included handmade pine cupboards. A water pressure system and septic system were also installed in 1971.

The steel tower in front of the lighthouse was erected over a three-day period from June 9 to 11, 1975. Coastguardsman Rumley removed the light from the lighthouse and placed a white four-second blinking light on the steel tower. The Canadian Coast Guard owns the square of land on which the skeleton tower stands and is responsible for its maintenance. Today, this tower still guides freighters into Trap Rock wharf and recreational boats into Bruce Mines Marina.

Presently, the lighthouse is under the care of the Peterson family, operating as Bruce Bay Cottages and Lighthouse, and is available as an all-season, self-catering rental. You can still climb the ladder to the widows walk for an amazing panoramic view of the North Channel, which is different in each season.

For a larger map of McKay Island Lighthouse, click the lighthouse in the above map.

From Sault Ste. Marie, travel east on Highway 17 for 64 km (40 miles) to Bruce Mills. Once in Bruce Mills, turn south on Bruce Bay Road. Stay to your left, and you will cross a bridge to French Island and reach the lighthouse on McKay Island after 2.9 km (1.8 miles). McKay Island Lighthouse is available for daily or weekly rentals.

The lighthouse is owned by Bruce Bay Cottages and Lighthouse. Grounds open, lighthouse open only to overnight guests.