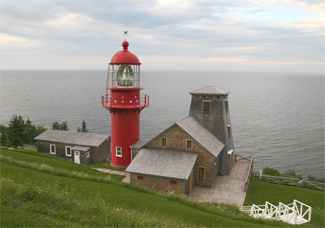 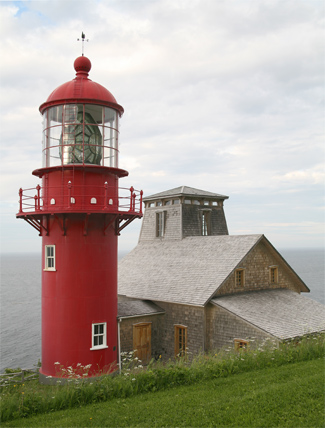 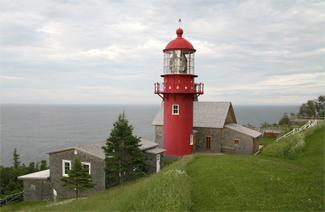 The most literal translation of the French word renommee into English is renown or good reputation. It is related to honor and living a life that is worthy of honor. In modern French, it can mean fame. Two stories circulate on how Pointe à la Renommée got its name.

The first story is of a shipwreck in which many of the survivors died of starvation. The pointe was originally named Pointe-a-la-Faim (Point Hunger), then incorrectly translated into English as Point Fame, and then back into French as Renommee.

The second is that it is named after the wreck of the Renommee in 1736. Owned by a man from La Rochelle, the vessel foundered off Anticosti. Only a handful of the fifty-four crew and passengers made it to the island. Half went in search of help while the others stayed in place without food or water.

After an appropriation of $4,000 by Parliament in 1879, the first Pointe à la Renommée Lighthouse was built in 1880 by R. Cameron of Lancaster, Ontario. Consisting of a fifty-foot (fifteen-metre) square wooden tower attached to the seaward side of a 1-½ story keepers dwelling, the lighthouse first exhibited its fixed white light, varied by red flashes every twenty seconds, in October of 1880. The light had a focal plane of 200 feet (61 metres) above high tide and a range of twenty miles (32 kilometres). To help mariners identify the lighthouse during the day, it was painted white with a single black horizontal band.

A signal station was also built at the point and connected to the telegraph line which ran along the nearby Maritime Road. The activation of the stations at Pointe à la Renommée completed the lighting and signal system for the south shore of the St. Lawrence River.

Speaking in 1902, George D. O'Farrell described how the signal system might be used by various passengers.

That a boon to the marine service the establishment of this Signaling System has proved, not only to those interested in the shipping, who are anxious for news of ships and cargoes, but also to those who have relatives and friends on board; for instance, an inward-bound vessel may have among her passengers a kind father returning to an anxious family from an extended business tour; perhaps, a child coming home from a pleasure trip in charge of friends, and anxiously waited for by a loving mother; or a fiancée counting the hours when the ship is to arrive to meet him who is to share with her the destinies of life; perhaps, a noble and brave soldier returning to his dear old home and family, after a long absence at the seat of war, striking for King and Country; and there may also be among the passengers a disgruntled old bachelor who has got no interest, except in himself, and who may be thinking if he only had the ship all to himself how happy he would feel! be it as it may, what a pleasure to all to be able to get news of the vessels movements, the hour she may be expected to arrive, &c.

In 1902, a small wooden building with a flat roof was built at the edge of a cliff, 180 feet northwest of the lighthouse, to house a Hamilton-Foster fog siren. This signal commenced service on October 8th of that year and gave blasts through four megaphones, pointed north, northeast, east and southeast, in the following succession:

This unique method of sounding the fog alarm was set up as an experiment to determine if mariners could calculate their bearing from the station by the relative audibility of the various signals. If a mariner heard the single blast loudest, or heard only a single blast, the siren should be located due south of him. Similarly, if the two short blasts are the loudest, the signal is southwest of the mariner, and so on for the other signals. The experiment was likely not too successful as in 1905 a new fog alarm building was built, fifty feet southeast of the lighthouse, and equipped with diaphone machinery. Water for the new boilers was piped from a lake near the station. The diaphone signal commenced operation in 1906, giving a four-second blast in each minute.

In 1903, the entire lighthouse, including the lantern room, gallery, and walls of the tower, were painted bright red to see if the lighthouse would be more visible against a green background in the summer and against snow in the spring and fall. Mariners reported that this was indeed the case.

The cost of maintaining the aging wooden light tower became quite high, and in 1906, a second tower was built of cast-iron panels and fitted with a first-order Fresnel lens that commenced operation October 1, 1907. Painted red, the tower was attached to the original keepers dwelling by a covered walkway. The tower was procured from Messrs. Ives & Company, of Montreal, for $1,597, and was erected by days labour under the supervision of the Quebec Marine Agency at a cost of $3,046.85. The massive lens revolved to produce a group of two white flashes every ten seconds in this manner: 0.43-second flash, 1.82-second eclipse, 0.43-second flash, 7.32-second eclipse.

Hubert Leigh Ascah was serving as keeper of the station when a new keepers dwelling was built in 1926 to replace of the original one. James Ascah was the first keeper of the lighthouse, and several generations of the Ascah family served at Pointe à la Renommée. In fact, between 1880 and 1943, members of the family were in charge of the lighthouse, the telegraph, and the signal tower at the point.

Pointe à la Renommée Lighthouse was discontinued in 1975 and offered to the Société Historique de la Gaspésie, which declined the opportunity to acquire and manage the site. Three years later, after the tower and site had been vandalized, the tower was dismantled and moved to Quebec City. In 1981, the tower was reassembled in front of the Coast Guards administrative headquarters in the Old Port of Quebec, where it attracted visitors for several years.

But then the community of LAnsea-Valleau, a small fishing community near Pointe à la Renommée, decided to launch a campaign to get their lighthouse back. Led by a few determined women, they were successful in 1997, and the Marconi station, which had been established at the point in 1904, was rebuilt the following year. A keepers dwelling, resembling the exterior of the first lighthouse was built next to the tower in 2001.

The villagers of LAnse-a-Valleau, showed their renommee in 1942, taking in the victims of the Nicoya after she was torpedoed by a German submarine, and they have shown it once again, a generation later, by creating a top-notch tourist attraction to interpret the areas rich maritime history.

For a larger map of Pointe à la Renommée (Fame Point) Lighthouse, click the lighthouse in the above map.

From Gaspé, drive north through Forillon National Park on Route 132, and then continue west just past L'Anse-à-Valleau where you will see signs alongside the road indicating the turnoff for Pointe à la Renommée Lighthouse and Marconi Station. Follow Chemin de Pointe-à-la-Renommée, a dirt road with a steep grade, for 4.3 km (2.7 miles) to its end at the lighthouse. The lighthouse is open between 9 a.m. and 5 p.m. from mid-June through September. For more information, call (418) 269-3310 or visit the website for the lighthouse.