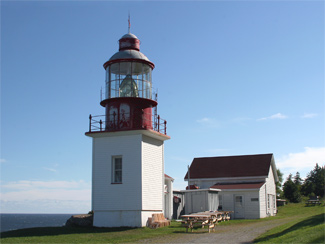 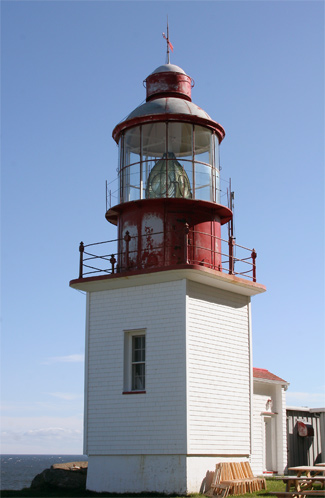 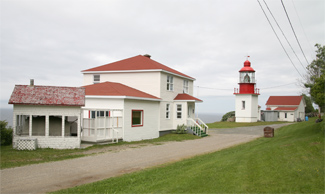 Cap Chat (Cape Cat) derives its name from a large rock formation on the cape shaped like a sitting cat and is the point where the Gulf of St. Lawrence narrows and becomes an estuary. This narrowing is defined by Cap Chat on the south shore and Pointe des Monts on the north shore and was a dangerous area for ships, especially at night or in times of poor visibility.

In 1869, a select committee on fisheries and navigation submitted a report, based on a series of questions posed to practical Fishermen, Shipmasters, Collectors of Customs and others in different parts of the Dominion. Question 37 in this survey asked where new lighthouses or fog alarms were required, and a Mr. Gibb, who had been sailing the St. Lawrence for thirty years, included the following in his response:

From Cape Rosier to Point des Monts light, a distance of over 120 miles along a carved coast, the navigator has no means of knowing his whereabouts, except in the vicinity of Mont Louis river, where there are four gaps in the land, and these can only be seen in daylight or on a very clear night. In so great a distance, I think it would be desirable to have two lights, one half way, and one certainly at Cape Chatte as a guide to the river on one side; Point des Monts will then form the other.

Local lore suggests that a private light marked the spot starting around 1811, but it wasn't until 1871 that the first official lighthouse made its debut. This square, wooden tower, with dwelling house combined, measured thirty-seven feet, from its base to the weather vane atop its lantern, and was built atop a 100-foot (30.5-metre) cliff near the northwest tip of the cape. The towers catoptric lighting apparatus had six faces, each with a No. 1 circular burner lamp and a twenty-inch reflector, and revolved to produce a white flash every thirty seconds. A. Gingras built the lighthouse under contract, and the total cost came to $3,895.49. Joseph Roy was appointed the first keeper of Cap Chat Lighthouse at an annual salary of $300.

Keeper Roy passed away in 1874 and was succeeded by Louis Treflé Côté. The following year, a new lighthouse was built on a more prominent site, 480 yards E. N. E. from the first lighthouse, where it would be of better use to mariners. The new lighthouse was also a square, wooden tower, but it stood only twenty-six feet tall, from base to vane. The lighting apparatus from the existing tower was transferred to the new one where it commenced operation on August 5, 1875, retaining the same characteristic of a white flash every thirty seconds. The total cost of the new lighthouse was $3,271.73.

By 1881, two black vertical stripes were painted on the white tower to make it more distinguishable during the day. For safety reasons, the lighthouse was moved back from the edge of the cliff in 1884.

During a tour of the lighthouses between Quebec and the Strait of Belle Isle in 1901, William P. Anderson, Chief Engineer of the Marine Department, noted that the fog alarm at Pointe Ste. Anne, roughly eleven miles east of Cap Chat, was of little use to mariners and recommended that an alarm be established instead at Cap Chat. As procuring water at Cap Chat for a steam fog alarm was problematic, Anderson though the station was ideally suited for a bomb station:

Bombs could be projected out over deep water to a sufficient distance from the cliff to make the sound effective. The fact that bombs require no skilled attendant is also a great point in their favour for this place. $200 per annum would pay the lightkeeper for the extra labour involved in firing bombs.

On August 15, 1891, an explosive fog signal was established at Cap Chat, consisting of cotton powder cartridges, exploded at a height of about 100 feet above the water, from a derrick erected on the edge of the cliff, east of the lighthouse. A cartridge was exploded every twenty minutes during periods of low visibility, and the keepers salary was raised $200 to compensate for the extra work and increased risk.

A shed was erected in 1893 to protect the keeping when firing the gun cotton explosives, and a stone magazine was used to store the explosive chargers. Starting in 1901, the frequency of firing was increased to once every fifteen minutes, and when a vessels fog signal was heard in dangerous proximity to shore, an additional shot was fired immediately and the firing continued at five-minute intervals until the vessel passed the station.

The current lighthouse, a thirty-one-foot (10-metre), square tower, built of reinforced concrete and topped with a circular red lantern, was completed in 1909. The towers cliff-top position places its light 133 feet (40 metres) above the sea. A revolving third-order Fresnel lens, manufactured in France by Barbier, Bénard and Turenne, produced a white flash every three seconds and could be seen up to seventeen miles. The Fresnel lens was deactivated in 2007, but a modern emergency light is privately maintained on the tower by le Parc Récréotouristique du rocher Cap Chat. A one-and-a-half-story keeper's house was originally attached to the tower by a passageway.

During World War II, Cap Chat was a staging area for German U-boats hoping to intercept coal convoys from Cape Breton. The stratification of fresh and salt water in the estuary made their detection difficult with early sonar.

Today, the station is managed by Parc récréotouristique du rocher Cap-Chat. The keepers dwelling was formerly used as a café, but it can now be rented for overnight stays.

For a larger map of Cap Chat Lighthouse, click the lighthouse in the above map.

From Cap Chat, travel 4.2 km (2.6 miles) west on Route 132, and then turn north on Rue du Phare, near a large, inactive wind turbine, and drive a short distance to a parking lot. You will need to walk roughly 0.3 km (0.2 miles) to reach Cap Chat Lighthouse. Parc du Rocher Cap-Chat offers ziplining, rappelling, and other activities on the cape from early June through mid-September. You can also rent the keeper's dwelling for overnight stays. For more information, call (418) 786-2112.