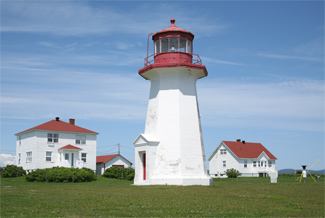 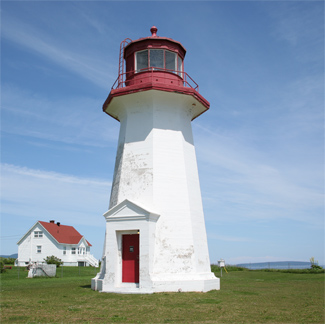 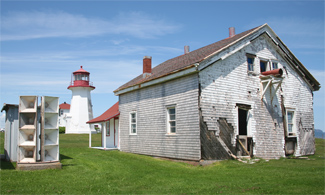 Cap dEspoir, a promontory at the north-east entrance to Chaleur Bay, was noted on English charts and even by the Department of Marine as Cape Despair, a phonetic sounding of the French name, which is totally opposite of its translation, Cape of Hope. Tradition holds that here on August 11, 1711 part of the fleet of Admiral Sir Hovenden Walker, on their way to capture Quebec, was wrecked, with the loss of all on board. The attack was abandoned, leaving New France intact for forty more years. The remains of the wreck were known as naufrage anglais, English shipwreck, and for many years, the local fisherman told of being warned of storms by the apparition of the English ship, with terror-stricken men gazing landward and the captain upbraiding the pilot.

A lighthouse on Cap d'Espoir was proposed as early as 1868 to enable the fishermen, when coming from Miscou Bank in thick weather, to find safe harbour. Parliament voted $1,000 in 1871 for a lighthouse on the cape, but the funds were deemed insufficient, and construction was delayed until a sufficient additional sum could be obtained to build and equip a good sea light.

Work on Cap d'Espoir Lighthouse, situated on the rounded point atop cliffs which fall sharply into the sea, began in 1873, and its light, a white flash every thirty seconds, was first exhibited on September 1, 1874. P. Carroll erected the lighthouse under a $2,000 contract, and E. Chanteloup of Montreal was paid $2,223.99 to supply the lantern room and a revolving light apparatus, which consisted of six lamps and twenty-inch reflectors. The square, wooden lighthouse stood forty-two feet tall, from its base to the weather vane on its lantern room, but its light had a focal plane of ninety feet (27.4 metres) above high water and was visible for fifteen miles. John Beck was appointed first keeper of the light at an annual salary of $400. The total cost of the lighthouse came to $5,175.16.

In 1876, William Barbour, the engineer for the Department of Marine in Quebec, was dispatched to Cap d'Espoir to investigate the failure of the revolving light. Barbour filed the following report following his trip:

According to your instructions to proceed to Cape Despair Lighthouse to see the cause of the breaking of the revolving gear and have it repaired, I left Quebec at 7 a.m., on the 7th August, and arrived at Cape Despair Lighthouse at noon on the 9th August. On examination I found three of the teeth of the wheel connecting with the wheel of the barrel for the chain were broken, the cause of this accident being the breaking of the chain. I had the chain repaired and put on a new wheel, and had the light in good working order that night. I left for Quebec the same night, and arrived there at 11.30 p.m., on the 11th August.

Finding his dwelling space in the square lighthouse a bit cramped, Keeper Beck built an eighteen-and-a-half-foot by eleven-foot addition to his kitchen in 1878.

A fire in 1883 damaged the tower's lantern room, and new lamps and reflectors were subsequently supplied. A storehouse and barn were built by Philip Vibert at the station in 1895 at a cost of $296.50 to complement the lighthouse and oil store.

In 1913, a quadruple-flash, long-focus reflector was installed in the lantern room, and a building was built to house a diaphone fog alarm. The signature of the light was thus changed to a group of four flashes every twenty-five seconds. The fog alarm sounded two blasts each minute in the following manner: 3.5-second blast, 3.5 seconds of silence, 3.5-second blast, 49.5 seconds of silence.

The original wooden tower was replaced in 1939 by the present forty-six-foot, octagonal, concrete tower topped by a red lantern. This lighthouse has three stories, each with a window, and is a sister to Cap-de-Bon-Desir, Cap-au-Saumon and Cap-Gaspé. The lighthouse currently exhibits a light with a signature of four white flashes every thirty seconds that can been seen for seventeen nautical miles. The focal plane is eighty-four feet.

The still-active lighthouse and decaying old foghorn building belong to the Canadian Coast Guard, but the keeper's dwellings were sold to Raymond and Isabelle Anna Maria Lalonde, who have turned one of them into a vacation rental.

For a larger map of Cap d'Espoir Lighthouse, click the lighthouse in the above map.

From Percé, travel south on Route 132 for 16 km (10 miles) and then turn southeast on Route du Phare and drive 1.3 km (0.8 miles) to its end where you will find Cap d'Espoir Lighthouse. A four-bedroom keeper's dwelling near the lighthouse is available for week-long rentals.