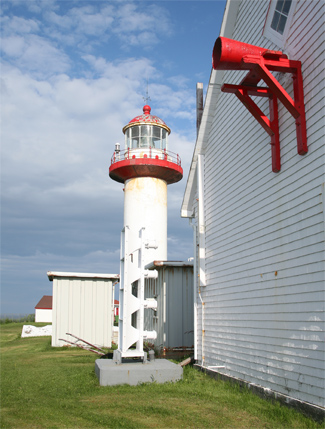 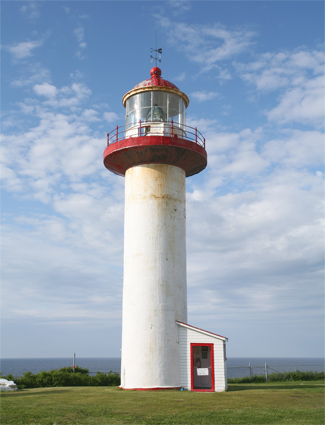 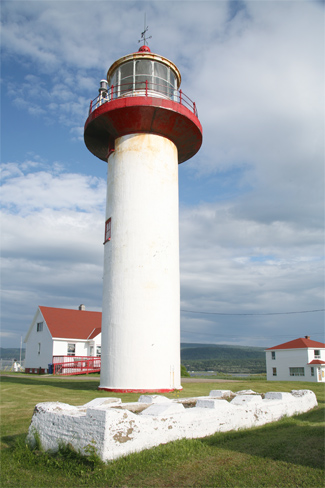 At picturesque Cap de la Madeleine, on the south side of the mouth of the St. Lawrence River, it is seventy-five miles (120 kilometres) to the north shore. Long before there was a lighthouse at the point, ship captains used the cape to establish their position on the river. Approval for a lighthouse at this strategic spot came in 1868, with an expected completion date in 1870, but the construction materials were lost when the schooner carrying them was overcome by a heavy gale and disabled. The hexagonal, wooden lighthouse stood fifty-four feet from its base to the vane on its lantern and was put into operation on August 21, 1871 by Philip Savage, who earned an annual salary of $300 as the lights first keeper.

A revolving catoptric lighting apparatus having two faces, each with two circular burner lamps and twenty-inch reflectors, was installed in the lantern room and alternately produced a red and white flash, with an interval of two minutes between each flash. The white flash could be seen up to twenty miles off, and the red flash up to fifteen miles off. John A. Cameron was responsible for the construction of the lighthouse, and E. Chanteloup of Montreal supplied the lantern and lighting apparatus. The total cost of construction came to $6,170.17.

A lighting rod was placed atop the tower in 1874, and four wire stays were attached to the tower with screw swivels to stabilize it. According to an 1876 report, the buildings at the station besides the lighthouse were a dwelling, an oil shed, and a storage shed, which was built at the landing. All these structures were built of wood and painted white with a red roof. A day mark, a black vertical stripe, was added to the seaward side of the tower in 1881.

Also at the station, beginning in 1879, was a semaphore, a pole with a combination of different flags which enabled the keepers to communicate with passing vessels. Wireless telegraphy, installed at the beginning of the 20th century, made the semaphore obsolete.

A steam fog whistle commenced operation at the station on September 24, 1892. Tenders for the erection of the necessary buildings had been called for early that year, but when none were received, the materials were purchased in Quebec City, sent down on the Government steamer, and the work performed under the direction of the Marine Department. The fog alarm building was painted white with a brown roof and was located just west of the lighthouse. The fog whistle gave an eight-second blast in each thirty seconds when needed.

The current lighthouse, a cylindrical, reinforced-concrete tower painted white and topped a red lantern and weather vane, was built in 1906-1908, after which the old lighthouse was demolished. This tower is a sister to those at Pointe-de-Metis and Matane, all three being built around the same time by the Steel Concrete Company of Montreal. A small workroom provides access to the tower, which stands fifty-five feet (17 metres) high, is eleven feet (3.5 metres) in diameter, and has a focal plane of 146 feet (44.5 metres). The Fresnel lens, which was active until around 2000, had a canvas covering on one side to facilitate its signature of three quick white flashes every thirty seconds. The lens was manufactured by Barbier, Benard & Turenne of Paris, France, and the initial illuminant was petroleum vapour burned under a mantle. Though replaced by a modern beacon, the Fresnel lens remains in the lantern room.

The original dwelling, where both the keeper and assistant resided, was dismantled when a two-story keeper's house was built in 1956, along with a smaller house for the assistant. The keepers left when the light was automated, but the dwellings remain.

The small fishing villages of Madeleine Centre and Rivière-Madeleine, are situated on either side of the lighthouse. Rivière-Madeleine is an important fishing harbor on the Gaspesie Coast, relying on the strong salmon fishing in the river. Today the lightstation is managed by Association Touristique de Rivière-la-Madeleine and hosts a tourist centre, museum, restaurant and a research facility that studies salmon fishing on the Madeleine River.

For a larger map of Cap de la Madeleine Lighthouse, click the lighthouse in the above map.

From Route 132 in Rivière-la-Madeleine, turn north onto Rue du Phare, which ends after 0.6 km (0.4 miles) at Cap de la Madeleine Lighthouse. A coffee shop, craft shop, museum, and a picnic area are located adjacent to the lighthouse. Guided tours of the lighthouse are available from early June to mid-October. For more information, call (418) 393-2114.