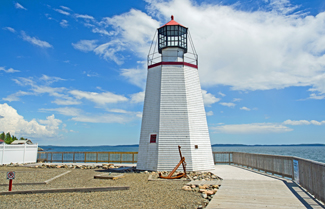 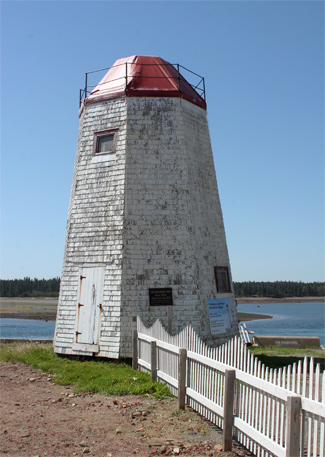 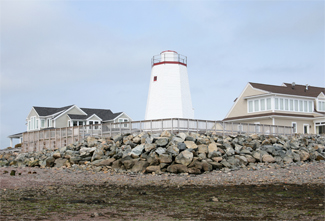 Located at the tip of a peninsula in Passamaquoddy Bay and at the entrance to the St. Croix River, the Town of St. Andrews was founded in 1783 by loyalists who left the United States after the Revolutionary War. St. Andrews is the county seat of Charlotte County and was an important seaport in the early days of the Colony of New Brunswick.

Duties were levied on vessels calling at ports in New Brunswick to help support the construction and maintenance of lighthouses. In 1832, the sum of £784 was collected at Saint Andrew, and from the resulting lighthouse fund £196 was spent in 1833 for erecting a Light House on Indian Point, at the Eastern entrance of Saint Andrew's Harbour. A keepers dwelling was built the following year, and the Commissioners of Buoys and Beacons for the Inner Bay of Passamaquoddy were refunded £111 for the project.

The deficiencies of St. Andrews Lighthouse, which consisted of a wooden, octagonal tower topped by a lantern room, were noted soon after it was built. The interior of the tower was left unfinished, providing little insulation in the winter, and its original lantern was deemed utterly unfit. Four lamps set in 15-inch reflectors were being used in the lantern room, but the space was so small that it was difficult for the keeper to tend the light. The tower was also inadequately secured to the wharf as shaking the railing atop the lighthouse caused the whole tower to totter. L. Donaldson, Surveyor of the Bay of Fundy Lighthouses, visited St. Andrews in 1839 and recommended that the interior of the lighthouse be plastered or washed with lime, the tower be anchored to the wharf, and that the lantern room from Head Harbour Lighthouse be transferred to St. Andrews.

The foundation of the lighthouse was properly secured in 1840, and in 1841, the lantern from the Head Harbour Lighthouse was placed atop St. Andrews Lighthouse, making it easier for the keeper to clean and trim his lamps, which burned pale seal oil and porpoise oil. Seal oil was the cheaper of the two, but porpoise oil had to be used for roughly four months during the coldest part of the year. In 1857, the lights four lamps consumed 179 gallons of seal oil and 32 gallons of porpoise oil.

James Smith, the first keeper of St. Andrews Lighthouse, served for nearly a decade until repeated acts of misconduct led to his removal in 1842. The Commissioners of Lighthouses at Saint Andrews gave the following explanation for the termination of Keeper Smith:  his confirmed habits of intoxication left us no course to pursue, and we are assured that Your Excellency will unite with us in opinion, that the principal qualification of a Keeper ought to be sobriety, for without it there can be no dependence or security, especially in the night when he is concealed from the public eye.

When John Pendlebury transferred from Machias Seal Island Lighthouse in 1842 to become the second keeper at St. Andrews, he began a family dynasty that continued for nearly a century. Emma Pendlebury had been serving as keeper of the lighthouse for twenty-one years when it was decommissioned in 1938.

A storehouse of moderate size was erected near the lighthouse in 1843, and a small but safe boat was provided to enable the Keeper to render prompt assistance, in cases of distress, to persons on the water; instances having occurred in the day time of the loss of life by the upsetting of boats near the station, which might have been averted had a boat been available; and it is much to be regretted so necessary addition had not been made before.

St. Andrews Lighthouse and the adjoining keepers house were built atop a wharf, which was exposed to the buffeting of the sea. The Saxby Gale that struck the Bay of Fundy in October of 1869 carried away a portion of the foundation block, necessitating immediate repairs to the wharf. A heavy gale on November 23rd, 1874 blew the tower over, but it sustained no serious injury and was righted and moved to the public wharf, where the Marine Department was subject to rent. After the old lighthouse block was repaired and raised, the tower was returned to its previous location in 1875.

After St. Andrews Lighthouse was deactivated in 1938, it served as a clubroom for the St. Andrews Yacht Club until the outbreak of World War II. A portion of the seawall supporting the lighthouse collapsed in the early 1960s imparting a dramatic tilt to the lighthouse. After an appeal by the Charlotte County Historical Society, the owner of the lighthouse, Ralph Conley, shored up the foundation.

For years the tower and adjacent Lighthouse Restaurant (demolished in 2005) were owned by Bob Estes, and in 2002 he transferred ownership of the lighthouse to St. Andrews Civic Trust. In July of that year Godin Ventures, Ltd. moved the tower about fifty feet from its former location atop the rapidly deteriorating wharf. A storm the following winter severely damaged the wharf; the lighthouse no doubt would have perished if not for the move.

In 2003, the lantern room, which had been boarded up for years, was removed and sent to the local community college in hopes that it could be replicated (it was too far gone to repair). When Sand Reef Lighthouse was built offshore in 1876, it seems thought was given to discontinuing St. Andrews Lighthouse as the Annual Report of the Department of Marine for that year included the following regarding Pendlebury Lighthouse: The inhabitants of St. Andrews still cling to the old buildings and appear unwilling to let them go. This same affection for old buildings prompted current residents of St. Andrews to complete a thorough restoration of the lighthouse and make it once again the focal point of its waterfront. In 2010, the seawall protecting the lighthouse site was completely rebuilt, and St. Andrews Lighthouse was restored and returned to its original location. To cap off the project, a newly fabricated lantern room was trucked to the site and placed atop the tower on October 24, 2011.

For a larger map of St. Andrews (Pendlebury) Lighthouse, click the lighthouse in the above map.