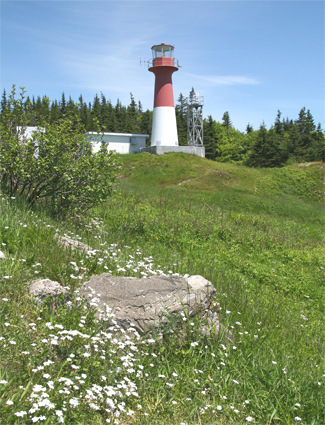 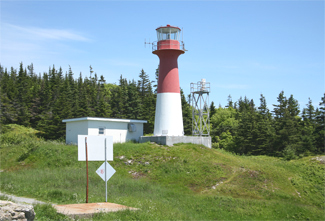 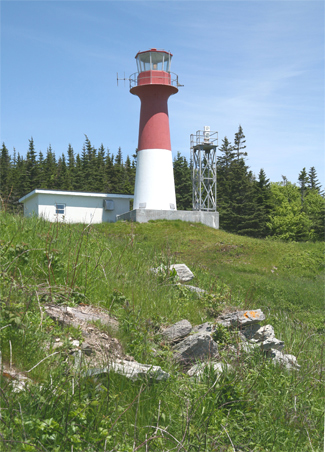 In an 1870 Department of Marine report, John Harley, Inspector of Lights for New Brunswick, recommended that a lighthouse be placed on Cape Spencer, a prominent headland situated on the Bay of Fundy about nine miles southeast of Saint John. Harley noted that a medium size flash or revolving light would prove of great benefit to vessels navigating the Bay, as well as to the two lines of steamships plying between this [Saint John] and the Nova Scotia ports.

A contract for Cape Spencer Lighthouse was awarded to Messrs. Clark and Stackhouse in 1871, and the resulting structure, built on the Pitch of the Cape over two hundred feet above the bay, was first lit on June 15th, 1873. The original wooden lighthouse consisted of a square, pyramidal tower, that measured thirty-five feet from its base to the top of the lantern and had an attached keepers dwelling. The lantern and catoptric lighting apparatus were supplied by E. Chanteloup of Montreal and described as a great improvement over the older ones in use at other lighthouses. The total cost of the lighthouse was $6,848.

To distinguish it from the fixed-white light on Partridge Island at Saint John, Cape Spencer Light employed two banks of lamps that completed a revolution every three minutes to produce the following signature: forty-five seconds of red light, dark for forty-five seconds, forty-five seconds of white light, dark for forty-five seconds. The white light could reportedly be seen at a distance of twenty-four nautical miles, but the red light, produced by glass coloured deep red, was only visible up to about ten miles. John H. Harding, the Marine Agent at Saint John, felt that if a pinkish glass were employed instead, the coloured light would be visible at a much greater distance. After a year of operation, it was found necessary to use a small stove in the lighthouse during the winter months to keep frost out of the machinery that revolved the light.

George C. Blacklock was appointed the first keeper at Cape Spencer and was subsequently described by John H. Harding as one who bestows the greatest care and attention upon his duties. Harding went on to note, None are more alive to the importance of having everything in a regular and orderly manner than Mr. Blacklock, and in his general supervision the Department have a keeper on whom they can rely with great dependence. Due in part to Keeper Blacklocks attentiveness, Cape Spencer had the reputation of being the best light on the Bay of Fundy. A boat was purchased for Keeper Blacklock to enable him to transport goods to the station, but landing at the station was dangerous and difficult.

The ten-acre lighthouse site at Cape Spencer was purchased from John Carney, who also owned the surrounding 100 acres. Realizing that the hardwood trees on the adjoining land would provide an excellent fuel source for Cape Spencer and nearby light stations, the Department of Marine paid Mr. Carney $360 for the additional 100 acres in 1875. In addition, Patrick Gorman was paid $40 for a right-of-way through his land so a road could be built to connect the lighthouse with the public highway. This mile-and-a-quarter road, which passed through a swamp, was completed in 1877, after three years of work, and made supplying the station much easier.

George Blacklock passed away in 1888 and was replaced by Fred G. Blacklock, who would take care of the light for over twenty years. In 1895, a new kitchen, measuring twenty-one by sixteen feet, was built onto the east of the lighthouse at a cost of $472.

Keeper Blacklock had been given a hand fog horn in 1898 that was to be sounded when fog signals of vessels were heard, but a decade later, the stations fog signal was seriously upgraded when a wooden fog alarm building was built on the cape to house a three-inch diaphone plant, furnished by the Canadian Fog Signal Company of Toronto for $7,250. Edward Bates received $2,650 for erecting the building and putting in a concrete cistern. J. E. Kanes built a wooden dwelling for the fog alarm engineer for $1,840 in 1908, while E. Rourke erected a coal and oil shed for $340 and day labourers constructed a 500-foot roadway to link the lighthouse and fog alarm building.

The characteristic of Cape Spencers light was changed to group flashing white in 1909 with two periods of maximum intensity separated by nine seconds followed by twenty-seven seconds of darkness. The catoptric apparatus burned petroleum vapour and completed a revolution every thirty-six seconds. An electric lighting plant was installed at the station in 1913.

During 1915 and 1916, a new fog alarm building and oil shed were constructed at a cost of $5,349. The Dominion Lighthouse Depot in Prescott, Ontario supplied the new fog alarm machinery for $1,918.

In 1918, F. H. Carson of Saint John built a new concrete tower at a cost of $3,553 to replace the old wooden lighthouse. This octagonal tower was painted white with a single horizontal red band about its middle and displayed a group flashing white light at a focal plane of 186 feet above high water. The fog signal building, which was painted white and had a red roof, was situated southwest of the tower near the end of the cape.

The fog alarm building burned to the ground on November 29, 1927, and a new building was erected the following year to take its place.

The present circular fiberglass tower, with its upper half painted red and lower half painted white, entered service in 1983, replacing a tapering, skeletal tower that had been erected in 1971.

Although just the modern tower and a fog alarm building remain at Cape Spencer, remnants of numerous old foundations scattered around the area attest to the fact that this was once an important station. Three 1960s-era keepers dwellings are located alongside the road just prior to reaching the lighthouse. The two on the east side of the road are private residences and remain in good shape, but the one on the opposite side of the road is abandoned and is now barely visible among the alders.

For a larger map of Cape Spencer Lighthouse, click the lighthouse in the above map.

From Market Square in Saint John, travel east on Union Street and then continue straight on Courtenay Causeway. Turn right onto Bayside Drive and then after 1.8 km (1.1 miles) turn right onto Red Head Road. Follow Red Head Road for 16.8 km (10.5 miles) until it ends at Cape Spencer Lighthouse. A number of footpaths meander past the lighthouse and lead out to the point. Use extreme caution in this area of high cliffs.