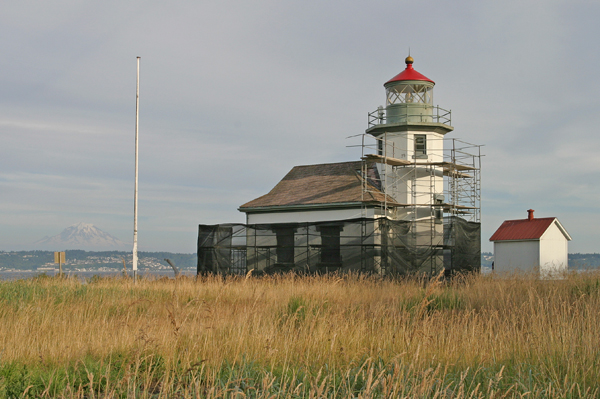 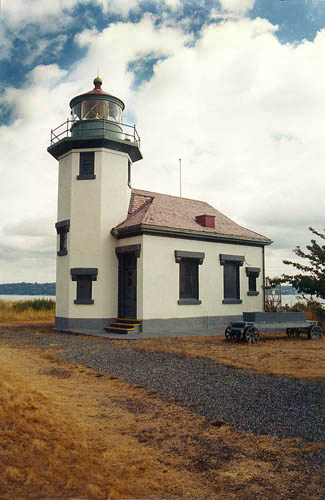 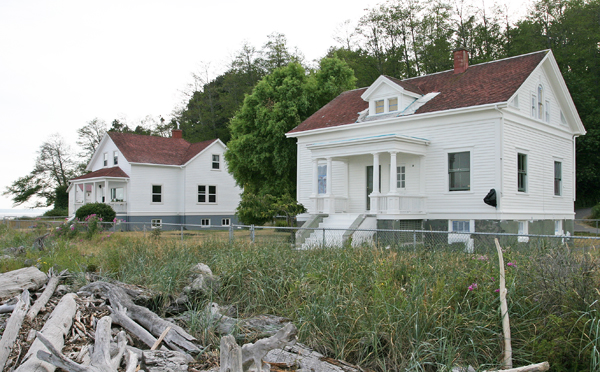 Featured in Berkeley Breatheds delightful childrens Christmas story, The Red Ranger Came Calling, Point Robinson Lighthouse sits on a sandy beach with verdant bluffs as a backdrop. Located on the northeast corner of Maury Island in Puget Sound, the lighthouse marks the halfway point between Seattle and Tacoma. Before 1925, Maury Island was only accessible by boat or bridge at high tide. Now, however, the island is easily reached from the larger Vashon Island, via a paved road over a narrow strip of land.

Point Robinson, also known as Robinson Point, was so named in 1841 by the Wilkes Expedition in honor of John Robinson, who served as quartermaster for the exploring and surveying party. In 1879, the Lighthouse Board recommended that a steam fog whistle be erected at Point Robinson, roughly nine miles from Tacoma, the prospective terminus of a branch of the Northern Pacific Railroad. The Board requested $7,000 for the station, and in 1883, an $8,000 appropriation was granted for the project.

A survey of the point was made, indicating that 23.6 acres would be needed for the station. The landowner wanted $2,000 for the parcel, a price the Lighthouse Board considered exorbitant, so condemnation proceedings were initiated for the property. These proceedings, however, were cancelled when the landowner died and his heirs agreed to lower the asking price to $1,000. The deed for the desired parcel was signed on January 27, 1884, transferring the property from Mary Elizabeth Webster to the U.S. government.

Construction on the point began in June 1884, and, after a break for winter, continued the following March. Water for the project was obtained by digging pits along the base of the bluff and running a 350-foot-long trough from the bluff out to the point, while the needed Sand was extracted from a nearby bluff and transported to the site in a scow. A one-story, fog-signal building, measuring thirty-six by sixteen feet, was constructed on the point to house a boiler and machinery formerly used at Oregons Point Adams Lighthouse. Water for the steam whistle was collected from a V-shaped roof, forty by sixty-feet in plan, built over two 11,000-gallon cisterns. An iron pipe was also extended 380 feet to a spring at the foot of the bluff to provide an auxiliary supply of water.

A one-and-a-half-story keepers dwelling, painted white and equipped with green shutters, was erected 630 feet south of the fog signal, and it too was equipped with a cistern for storing water. The residence measured twenty by thirty feet and had a one-story addition on its north side. Construction work at the station was completed on June 3, and the fog signal commenced operation a few weeks later, on July 1, 1885, giving a six-second blast each minute when necessary. Franklin Tucker, who had served as head keeper of New Dungeness Lighthouse from 1873 to 1882, was transferred from his position as first assistant keeper at Cape Flattery to become head keeper at Point Robinson.

To protect the station from high tides, a log bulkhead was built along the beach, and hydraulic sluicing was used to raise the ground behind the bulkhead and fill in a lagoon on the station property. The bulkhead enclosed over four acres, and most of this land was raised anywhere from two to twelve feet and then seeded with grass.

A light, in the form of a lens lantern that shined fixed red and was attached to a twenty-five-foot post, commenced operation at the station on December 12, 1887. Mariners complained that the light was obscured by the keepers dwelling for vessels approaching from the south, so in 1894, the height of the light was increased 5 ½ feet. A ten-foot-square frame tower with cross bracing and a central support column was built for the light in 1897. This structure had three flights of stairs that were used to access a platform from which the fixed red light of a lens lantern was displayed. Around 1907, another wooden tower, which was eleven feet square at its base and tapered to seven feet square at its top, was built on the point.

With its picturesque setting and closeness to civilization, Point Robinson was a preferred station among keepers and their families.

In 1897, Keeper Charles Davis reported that the whistle had blown for 528 hours during the previous year and consumed about thirty-five tons of coal. After shoveling all that coal, Davis requested the help of an assistant, and the Lighthouse Board petitioned Congress that year for $3,000 for a second dwelling at the station. The Board had to repeat its request for eight years, until it finally received funds on June 30, 1906, and by then the cost had risen to $5,000. Frank Wyman had been assigned to the station in 1900 as an assistant keeper, and the two keepers and their families were forced to share the stations one dwelling.

The bids received for erecting the new dwelling were in excess of the budgeted amount, so a working party from the district was employed to build the structure. This delayed the completion of the residence until 1907. The total cost for the new six-room dwelling, built just north of the existing dwelling, was $4,976.06. An oil house with a concrete floor and walls of corrugated galvanized iron was added to the station in 1913.

The current lighthouse, featuring an octagonal thirty-eight-foot tower, was completed in 1915. A third-class Daboll fog signal powered by compressed air was installed in the new lighthouse to replace the stations steam whistle, and three fog horns projected from the north, east, and south walls of the lighthouse to distribute sound over the surrounding water. Point Robinson Lighthouse is a twin of the one built two years earlier at Alki Point and also features a lantern room with diagonal astragals. The new light was initially produced by an incandescent oil vapor lamp set inside a fourth-order lens that revolved to exhibit a group of three white flashes every ten seconds. The light source and the fog signal were converted to electric power in 1918, and a fixed fifth-order Fresnel lens replaced the fourth-order lens. The electrified light shined two white flashes every twelve seconds in the following pattern: on for three seconds, off for one second, on for another three seconds, and off for five seconds.

William S. Denning was the longest serving keeper at Point Robinson, starting as head keeper in 1912 and remaining at the station until the 1930s. In 1916, Keeper Denning and his assistant rescued a couple and two children from a disabled boat near the station and provided them with food and clothing. In 1920, Keeper Denning towed the disabled tug Mayflower to safety, and in 1922, he was awarded the efficiency flag for having the best-kept station in the district.

Wyman Albee, who had previously served at Point Robinson as assistant keeper, returned in 1939 as head keeper and was in charge of the station through 1944, with Jens Pedersen serving as his assistant. The Albees and Pedersens had four children, each with three girls and a boy, and a second son was born to the Albees at the station in 1942. Ila Albee later wrote a memoir entitled Children of the Lighthouse that chronicled her familys time at five lighthouses in the Pacific Northwest.

Pods of Orca would play right in front of the house, recalled Ila from her time at Point Robinson. Whoever saw them first would alert everyone by calling, The black fish are coming! The black fish are coming! They put on a theatrical display just for us, jumping, diving over each other, slapping their huge tails, making sprays like fountains going, Spisssh! as they expelled water from their spouts.

One young whale leapt out of the water and became stranded on the shoal that divided the deep water at the end of the point. Not wanting to see the animal suffer, Keepers Albee and Pedersen went to its aid. Equipped with lengthy two-by-fours, the keepers pushed against the whales side, ever wary of its powerful tale and sharp teeth. Their effort paid off, as the whale started to float, and with a twist of its tail, it dove into deep water.

The Albees were Jehovahs Witnesses and suffered persecution during World War II. While Jehovahs Witnesses in Germany were placed in prison camps for not hailing Hitler, those in America were frowned upon for not saluting the flag. In 1943, just as the school board scheduled a meeting to discuss expelling the Albee children, the Supreme Court reversed its ruling made three years earlier that required school children to salute the flag and recite the pledge of allegiance. The school board backed down, but the Albee children stayed out of school for a year while emotions cooled down. The Albees time at lighthouses ended in 1944, when Keeper Albee accepted an assignment to the Coast Guard base in Seattle.

Point Robinson Light was automated in 1978, but Joe Wubbold, a retired Coast Guard Captain and volunteer keeper at the lighthouse, helped persuade the Coast Guard to keep the historic fifth-order Fresnel lens in place. The lens remained active in the lantern room until 2008 when, after more than ninety years of service, the Coast Guard replaced it with a plastic beacon, mounted outside the lantern room.

In the early 1990s, local residents caught wind of a plan to lease land on Point Robinson to a seafood-processing plant. The citizens promptly joined together to form the Keepers of Point Robinson, and, coupled with the Vashon Parks Department, they were able to negotiate a fifteen-year lease on the property with the Coast Guard. Starting in July 2003, one of the two keepers dwellings was made available for weekly rentals, and the second dwelling has since been remodeled for the same purpose.

If, by chance, you are a Red Ranger fan, the magical old man may not be at the lighthouse, but the treed bicycle . . .

Its still there, in the woods on Vashon Island behind the Sound Food building near the intersection of Vashon Highway and SW 204th Street.

Located on the eastern most tip of Maury Island, which is attached to the eastern part of the larger Vashon Island.
Latitude: 47.38813, Longitude: -122.37439

For a larger map of Point Robinson Lighthouse, click the lighthouse in the above map.

From the ferry landing on the southern end of Vashon Island, go north on Vashon Island Highway, the main north-south road on the island, for 5.7 miles to Quartermaster Drive (225th Street). Turn right on Quartermaster Drive and drive east for 1.4 miles where the road will fork. Take the right fork, Dockton Road, drive 0.4 miles and then turn left onto Point Robinson Road. Follow this road for 1.7 miles where it will connect with 240th Street. After these roads meet, continue east 1.7 miles to the lighthouse.

Tours are offered every Sunday in the Summer, starting on Mother's Day and going to mid-September. Tours at other times can be arranged with Captain Joe by calling (206) 463-6672 or emailing him. As much lead time as possible is requested as a mutually agreeable date and time must be worked out. The grounds surrounding the lighthouse can be accessed during daylight hours. The keeper's quarters are available for weekly rentals. Call (206) 463-9602 to inquire about availability.

The lighthouse is owned by the Coast Guard and managed by Vashon Park District. Grounds open, dwellings available for weekly rentals, lighthouse open on Sundays.