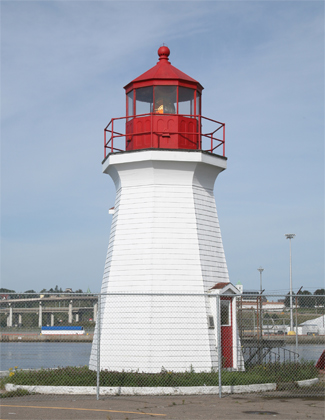 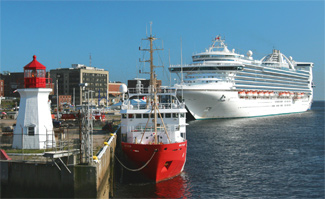 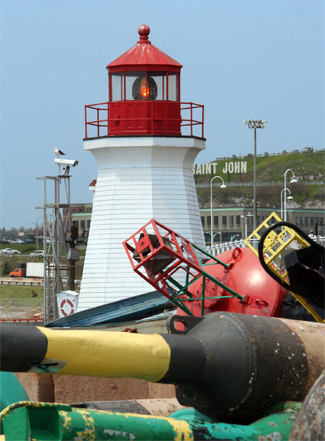 One of two notable faux lighthouses in New Brunswick, this imitation octagonal wooden tower was built in 1985 by employees of the adjacent Coast Guard base. It is equipped with the 1911 lantern from Grindstone Island and an operational fourth-order Fresnel lens from Brier Island Nova Scotia. Although the Coast Guard base is not open to the public, the lighthouse may be easily viewed from the boardwalk outside Market Square and the Hilton Hotel.

The lighthouse was built under the direction of Larry Wilson, who served as Base Commander at the time. Larry went on to serve as Maritime Regional Director until his retirement in 2008. Larry was a great lighthouse enthusiast himself and was instrumental in bringing like minded people together in 1996 for the first B.E.A.C.O.N. conference. It is due in large part to this that the region leads the way in lighthouse preservation advocacy in Canada. For these reasons, this attractive faux lighthouse is referred to by some as Larrys Light.

In 2008 the portion of the Coast Guard base where the lighthouse is located was sold as part of a waterfront development project. The fate of the lighthouse is unknown although conceptual drawings show it remaining in place. This will make the tower more accessible to the public, but the upkeep of the historic lantern and lens would likely be transferred from the Coast Guard to the City of Saint John, which has proven to be less than ideal custodians of other lighthouse artifacts.

Located on the northwest corner of the Coast Guard base in Saint John near Market Square.
Latitude: 45.27202, Longitude: -66.065

For a larger map of Saint John Coast Guard Base Lighthouse, click the lighthouse in the above map.

From Highway 1 in Saint John, take Exit 123 and then go south to Union Street. Turn left onto Union Street to reach the river and Market Square from where you can see Saint John Harbour Lighthouse.