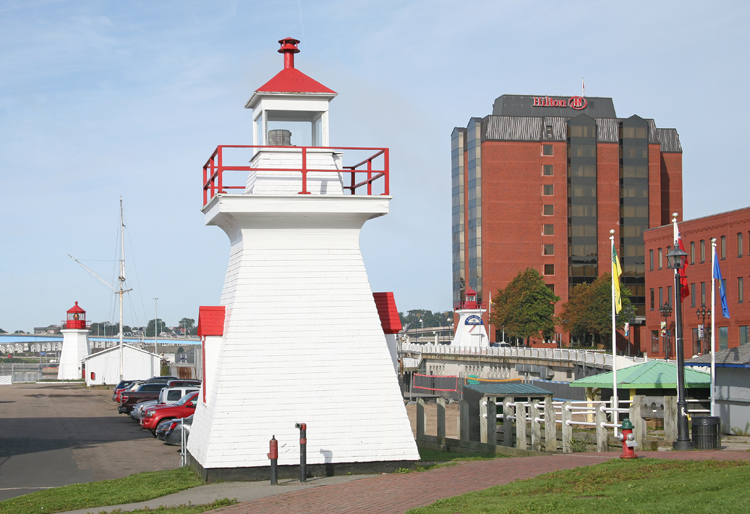 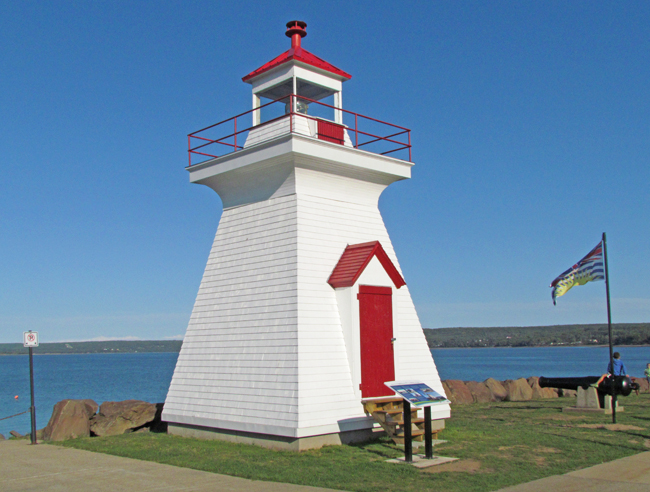 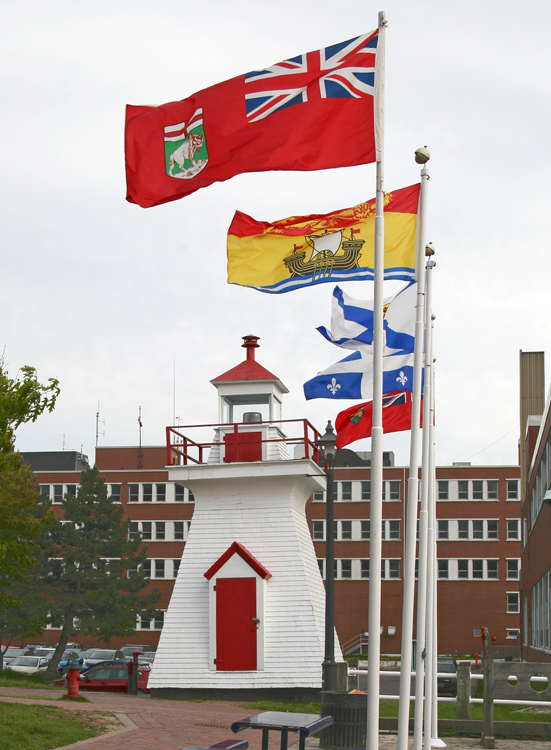 The first light to mark Digby Pier was established in 1887 in the form of a lantern on a pole that exhibited a red light. In 1903, an enclosed wooden tower was erected at the outer end of the government pier to replace the mast light. The new light was placed in operation on June 6, 1903, and the mast and shed were removed and later used at Granville Ferry. John Roney of Granville Ferry built the tower, which measured twenty-seven feet tall from its base to the top of the ventilator on its lantern room, for $494, and a seventh-order lens was initially used to produce a fixed red light. The installation of a fifth-order lens in 1915 increased the power of the light.

After the Digby ferry terminal was relocated in 1971, the pier fell into disrepair. Digby Pier Lighthouse was decommissioned when the pier was deemed unsafe, and sometime in the 1970s, the tower was moved to the Saint John Coast Guard Base, which had responsibility for all lighthouses on the Bay of Fundy. In 1983, the tower was moved approximately one hundred feet and given to the city of Saint John to be part of the newly renovated Market Slip area.

Digby Pier Lighthouse was maintained sporadically during its stay in Saint John, but it was given a major facelift in July 2010. The tower, which housed an inactive drum dioptric lens, saw several uses over the years, mostly as an information or ticket-selling kiosk. During the towers final years in Saint John, it was surrounded by flags of all thirteen Canadian provinces and territories.

In 2012, with plans in place for the development of his towns harbour, Digby Mayor Ben Cleveland decided it was high time Saint John gave the lighthouse back. "Its known as the Digby lighthouse in Saint John, so why not put it back in Digby?", said Cleveland. The new breakwater planned for Digby needed a light to mark it, and Cleveland thought it was appropriate that the old Digby Pier Lighthouse serve that purpose.

Returning a lighthouse to its original home, or at least somewhere nearby, is not without precedence in Canada. An iron tower was returned to Pointe à la Renommée, Quebec in 1997, after it had stood outside the Canadian Coast Guards administrative headquarters in the Old Port of Quebec for sixteen years. In 1998, a wooden lighthouse was returned to Port Greville, Nova Scotia from the grounds of the Canadian Coast Guard College near Sydney. More recently, the iron tower used on the south end of Nova Scotias St. Paul Island was relocated from the Coast Guard base in Dartmouth to a museum in Dingwall in 2011. In these cases, the lighthouses were still owned by the Coast Guard when requests for repatriation of the towers were made. This was not the case for Digby Pier Lighthouse.

Kent MacIntyre, chair of Saint John Waterfront Development, visited Digby in early August 2012 to discuss returning the lighthouse, and a month later he telephoned Mayor Cleveland to announce that the Saint John councilors had decided to relinquish ownership of the lighthouse. We have three lighthouses on the waterfront, so handing back one to help invigorate the heritage development of another Bay of Fundy community is wonderful, said MacIntyre.

On October 19, 2012, Mayor Ben Cleveland led a delegation of thirty Digby residents across the bay on the 8 a.m. Princess of Acadia ferry to retrieve their lighthouse. The delegation brought along 230 pounds of scallops, worth about $2,500, which, along with hot dogs and a bottle of pop, were served to those who showed up for the send-off party. The public was allowed into the lighthouse for one final time in Saint John, and then the lantern room was removed and the five-ton lighthouse was lifted off its foundation and placed atop a flatbed trailer in preparation for its ferry ride across the bay.

The lighthouse spent its first night back in Digby in the ferry terminal parking lot, and on the morning of October 20, it was relocated to the towns public works compound on Sydney Street. The lens from the lighthouse was stored temporarily at the Admiral Digby Museum.

With no funds available for restoration, the tower remained in storage for few years. Then, in July 2015, the lighthouse won $15,000 in the National Trusts This Lighthouse Matters competition, and this was enough to trigger the needed work.

Work on a new breakwater north of Digby Wharf was to begin in January 2013, and the plan was originally to place the renovated Digby Pier Lighthouse on the breakwater when it was completed, but a site along the Digby waterfront was selected instead. On June 21, 2016, cranes lifted the lighthouse from its temporary home in the public works compound onto a flatbed trailer for its journey to the waterfront. The lighthouse was placed atop a prepared cement foundation at Admiral Walk, across from the post office. During the next few weeks, the lantern room was returned to the lighthouse, and the structure was shingled and painted in time for a re-dedication party on July 23.

I was asked why it was so important to preserve the Digby Pier Light, said Mayor Ben Cleveland. My response was to remember the loss of the Post Office, the old Scotia Bank and the train station.

Located along the waterfront near the intersection of Water Street and Church Street.
Latitude: 44.62235, Longitude: -65.75557

For a larger map of Digby Pier Lighthouse, click the lighthouse in the above map.

From the Evangeline Trail (NS 101), take NS 303 and follow it North into Digby. After 2.2 km, continue straight on Warwick Street, and then turn left onto Queen Street. After two blocks, turn right onto Church Street and continue to the waterfront where you will find the lighthouse.

The lighthouse is owned by the Town of Digby. Grounds/tower closed.