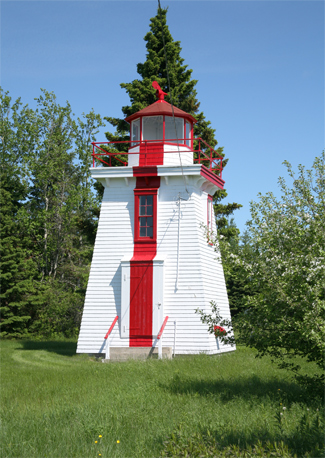 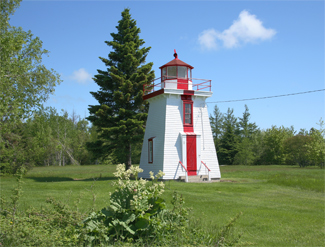 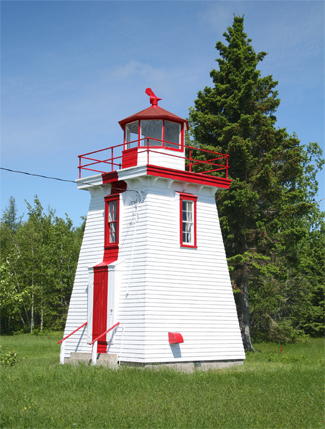 Located on the northeast side of Miramichi Bay, Neguac was settled by Jean Sovie in 1757, two years after the expulsion of the Acadians. For years, the village depended on fishing and forestry, and today oyster farming and lobster fishing are the main drivers of the local economy.

A string of barrier islands runs along the entrance to Inner Miramichi Bay, separated by a few narrow channels or gullies through which vessels may pass. In 1873, Neguac Lighthouse was established on the southern end of the northernmost of these sandy islets, known as Neguac Sandbar, to guide vessels through Neguac Gully. Two years later, a beacon light was added to range with Neguac Light, allowing vessels to safely use the channel at night.

In 1891, tenders were invited to relocate the abandoned range lights at Tabusintac to Lower Neguac. The main tower at Taubsintac Gully was erected in 1873 on Crab Island, and a beacon light was added two years later to form range lights, but the lights had to be discontinued due to shallowing of the gully.

The lowest tender received for the move was $245, a sum considered excessive, so W. H. Noble was sent by the Department of Marine to move the lights, which he accomplished in October 1891 at a cost of $205.07. Lower Neguac Range Lights were activated with the opening of navigation in 1892.

The relocated front light, consisting of a lens lantern hoisted atop a sixteen-foot-tall mast that had a shed at its base, was located on the east end of the cribwork block that helped form the Lower Neguac Wharf. The mast and shed were originally painted brown, and diamond-shaped slatwork was affixed to the mast to make it conspicuous as a daymark. The fixed white light on the wharf was displayed at a height of twenty feet above high water and was visible from up to nine miles.

The companion rear light, exhibited from a wooden, enclosed tower surmounted by a lantern, was placed on the beach at Lower Neguac, 1,050 feet from the front light. The tower measures thirty-three feet from its base to the vane on the lantern and displayed a fixed white light at an elevation of thirty-two feet above high water that could be seen for ten miles over a small arc on each side of the range line.

In 1895, the front light was changed to fixed red and elevated another ten feet. The following year, a new mast and shed for the front light were erected alongside the roadway of the wharf, roughly forty-five feet southwest of the previous location. The height of the new light was twenty-five feet above high water.

The rear light was relocated to a newly purchased site in 1929 that placed it 1,200 feet from the light on the wharf.

Zeph J. Savoy served as the last keeper of the lights from 1945 until the range was automated in 1957.

The Lower Neguac Rear Range Lighthouse was decommissioned in 2003, but an official light is still exhibited from Lower Neguac Wharf.

For a larger map of Lower Neguac Range Rear Lighthouse, click the lighthouse in the above map.

From Highway 11 in Lower Neguac, turn south onto Godin Road and drive 1 km to its end. Park near the head of the wharf and walk east on the beach for approximately 500 feet. From this location, there is a good view of the lighthouse to the north.