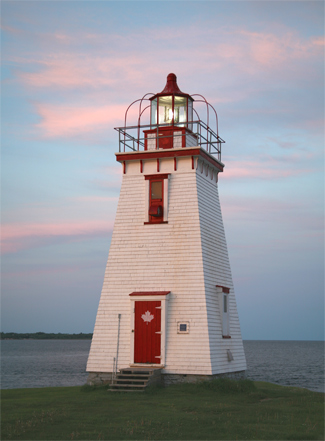 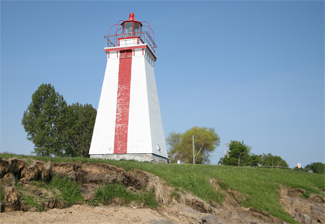 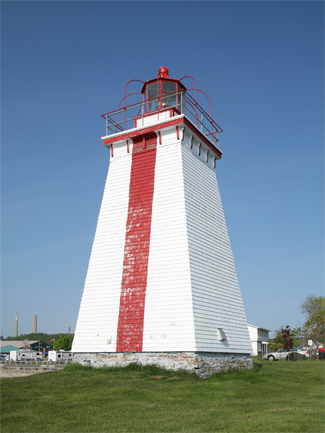 Immigrants arriving from Scotlands Isle of Arran named the point protruding eastward into Chaleur Bay at the mouth of the Restigouche River Inch Arran after their native island home. (Inch is Gaelic for Island.) Just offshore from the point are found Bon Ami Rocks, a chain of rocks named after Peter Bonami, an early settler of the area.

Inch Arran Point has also been known as Bonami Point, and there is one more name that has been applied to the point  Arseneau Point. In the 1800s, the Arseneau family lived nearby, and Marie-Louise Arseneau would place a candle, and later a lamp, in her window to guide her husband, sons, and other local fishermen back home in the night. Marie-Louise looked after not only the fishermen but also the sick, for she was known as the medicine-woman of Dalhousie. Using her knowledge of herbs and roots, she would treat the infirm, some of whom came from afar to seek her help.

In 1870, the current Inch Arran Lighthouse, an 11-metre (36-foot) square, wooden tower, was built on the point. The towers fixed white light, produced by a No.1 circular wick lamp, two flat wick lamps, and three fifteen-inch reflectors, was exhibited for the first time on November 7, 1870 by Louis Arseneau, husband of Marie-Louise. The iron lantern atop the tower has a diameter of four-and-a-half feet, and its glass panes measure forty-four by twenty-one inches. By 1875, an 18 ¼-inch-reflector had taken the place of the fifteen-inch reflector used with the circular wick lamp.

Louis Arseneau passed away in April of 1888, and his grandson Joseph Arsenau assumed responsibility for the lighthouse. Joseph had actually be caring for the light before his grandfathers passing, and due to an oversight at the Department of Marine, Joseph was not formally made keeper until 1894, at which time he was thirty-eight.

The towers stone foundation and the steps leading to it were pointed with cement in 1895. A new floor was also laid in the tower at that time. For several years starting in 1875, the inspector had been requesting an oil store for the lighthouse as the oil was stored in the bottom of the tower and some of it would occasionally be spilled on the floor, creating a hazard. There is no record, however, that an oil store was ever built.

In 1901, Keeper Arseneau requested an increase in pay as he was making an annual salary of only $100, the same amount given to his grandfather in 1870, while having to pay for repairs and freight at the station. My neighbour Light House Keeper John Dutch of Heron Island gets Five Hundred a year, Arseneau informed the department. If it was not for the light I could earn fair wages in summer working on ships, but it binds one at home.

In response to the keepers request, the Deputy Minister of Marine and Fisheries wrote: I have to inform you that as your light is an unimportant harbour light and the salary the same as paid to other keepers of similar harbour lights no increase can be allowed you at present. I have also to inform you that when a keeper receives a salary such as is paid you the Department does not expect him to give all his time to the duties of lightkeeper, and as your light is close to a village you should be able to obtain additional employment.

Joseph Arseneau passed away in November of 1913, and his wife, Denise, was made temporary keeper of the light until the close of navigation that year. After considering the appointment of a new keeper, W.S. Montgomery, Member of Parliament, recommended that Denise Arseneau be retained as keeper as her property was right at the light, and any other caretaker would live at least a mile away.

Denise Arseneau was still keeper of Inch Arran Lighthouse on September 19, 1929, when at 3 p.m. she was coming down the stairs with Inspector Moffet, when her foot slipped and she fell down and fractured her right humerus. Armand J. LeGouffe filled in as temporary keeper for a few months while Denise recuperated.

In 1972, Inch Arran Lighthouse became a front range light when a metal skeleton tower supporting a light was erected a few hundred metres to the west. Mariners can now use the range lights to find the entrance to the Restigouche River.

During the summer of 2005, Suzanne Valotaire, a descendant of Marie-Louise Arseneau and former resident of Dalhousie, was artist-in-residence at the Restigouche Regional Museum, where she developed a work of performance art entitled "The Light." At 9 p.m. on August 20, 2005, about 50 people, many of whom were in town for an Arseneau reunion, congregated at the lighthouse to witness the performance in a driving rain. Using cutouts of a sailboat and a house, Valotaire created shadows on the tower during the presentation that began on the beach and culminated on the deck of the lighthouse, high above the huddled crowd.

Under the Federal Heritage Buildings Policy, Inch Arran Lighthouse was recognized as a Federal Heritage Building on September 5, 1991, partly for the unusual "birdcage" of iron bars that surrounds the lantern. The lighthouse remains in operation and in clear weather, can be seen at a distance of sixteen miles. Inch Arran Point is the northernmost point in New Brunswick and a perfect spot for birdwatching, taking panoramic photographs, and catching a sunrise. Just a stone's throw away, visitors can stay at Inch Arran Campground, built on the site of the massive, 142-room Inch Arran Hotel that attracted visitors from around the region from its opening in 1884 until it was destroyed by fire in 1921.

Inch Arran Lighthouse was designated a heritage lighthouses under the Heritage Lighthouse Protection Act in 2017.

For a larger map of Inch Arran Point Range Front Lighthouse, click the lighthouse in the above map.

From Highway 134 in Dalhousie, go east on Victoria Street until it ends, where you will find parking near Inch Arran Lighthouse.